Quick rundown of the week in popkultur, as this Open Thread also features some Exciting Announcements:

First up, Matthew Wrather’s favorite entertainer, Taylor Swift, won four awards at the Country Music Awards. She allegedly celebrated with a “cereal party” with her parents in her kitchen at home. She chose Frosted Mini-Wheats, the only cereal big enough for her to see through her perpetual squint. 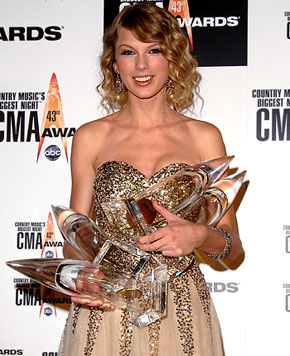 Question: if you won any sort of entertainment award – a Grammy, a BAFTA Award, the Palme d’Or – before you could legally drink, what family-friendly way would you pick to celebrate?

In other squinty rock star news, Steven Tyler either is or is not leaving Aerosmith. We don’t know! Guitarist Joe Perry announced on Twitter that Tyler was leaving last week. But Tyler had no comment on the subject until appearing on stage – to Joe Perry’s shock – at a concert on Tuesday night. He declared into the mic that he wasn’t leaving Aerosmith, leading the audience to wild cheers and sighs of relief. The two of them then played a 30-year-old song. 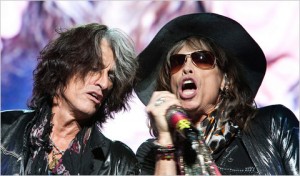 Question: which element of this story did you miss when it first aired – the fact that Steven Tyler had apparently left Aerosmith, or the fact that he apparently hasn’t? Or both? Or neither?

And finally, our own Mark Lee’s article on the Peak Theory of Rock was linked by BoingBoing, Good.is and made the front page of Digg yesterday. Nice work, Mark!

Question: is covering Overthinking It’s marginal gains in Internet popularity as if they were pop culture news?

But don’t stop now! We have Three Announcements, each of which offers you a rare opportunity to plunge your hand elbow-deep in the ectoplasm of OTI’s backstage.

Also, you may talk about movies, TV, music, comics, videogames, and culture. It’s your open thread!