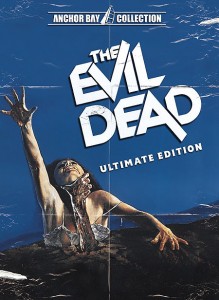 For those of you who are not aware, back in the 1980s, a man named Samuel Raimi made a series of films called The Evil Dead Trilogy.  These films, particularly the second and third of the trilogy, are beloved as cult classics from the horror-comedy genre.  Evil Dead 2, for example, has a scene where its protagonist (Bruce Campbell) gets in a slapstick duel to the death with his hand.  The third movie, Army of Darkness, involves Bruce Campbell’s character traveling back in time to train a medieval army to fight his evil clone and a legion of living skeletons.  These movies were made, shall we say, with a tongue firmly in cheek.

Ah, but what of The Evil Dead (a.k.a. Evil Dead 1), the first film of the series?  Although it is not nearly as amusing as its sequels, and though its violence is possibly more brutal than even Oscar-winner Peter Jackson’s classic Dead Alive, I would nevertheless characterize it as a horror-comedy, as well.

Here’s the difference, though.  Where Evil Dead 2 and Army of Darkness show a blend of horror and comedy, Evil Dead 1 seems to be two separate movies: one a horror movie and one a comedy.

The interesting part to me is the point at which the film switches from type A (B-movie horror) to type B (gross-out zombie comedy): the famous tree rape scene.  And thus, my question for today–which, incidentally is a question that many have asked before and that many will likely ask again–is:

WHY THE HELL WAS THERE A TREE RAPE SCENE IN THIS MOVIE?!

On second thought, let me whittle down my question to one that’s a little more specific.  What I want to know is, how are we meant to read the tree rape scene?  Is it meant to be the end point of Evil Dead’s B-horror movie, or is it the beginning point of the gross-out zombie comedy?  Or is it neither?  All this and more after the jump.

How to Read Evil Dead And Why

The Evil Dead starts as a typical “cabin in the woods” B-horror movie.  Five college students go off on a trip to a run-down, isolated cabin (“how did you get it so cheap, anyway?”), where they find a rather creepy book (“The Book of the Dead”) and a tape-recorder with some evil sounding words on it.

Other than the bad acting and a sign labeled “DANGEROUS BRIDGE,” there’s really no comedy to speak of in this portion of the film.  Rather, we, the audience, are meant to take in the most clichéd elements of the horror genre.  The main characters are young, attractive people in a scary-story situation.  Swings swing of their own volition; noises thump the floorboards from the cellar below.  Even the movie’s characters come out of the standard horror-movie playbook: the likeable but skeptical protagonist, the douchebag who thinks this is all a big joke, the scaredy-cat who will be among the first to die, the bland love-interest, and so on.

One can argue that the very use of these clichés shows us that Evil Dead is meant to be read as a parody.  For me, though, the first half of the film does not quite reach that level of satire.  Simple rehashing of old tropes does not a parody make; you need to exaggerate them enough to create a comic tone.

What the first half of Evil Dead does achieve, however, is a feeling of legitimate suspense.  While I personally didn’t find the first half particularly terrifying, I did find myself saying, “Don’t go into that room!” and “No, no, don’t split up!”  In other words, I did what I’d normally do when watching a horror movie—not a horror-movie parody.

It’s only in the second half of the film that things become exaggerated enough to qualify as funny.  An evil spirit takes over four of the five cabin-mates, making them into zombies from the Peter Jackson mold.  These undead people bleed—too much.  The amount of blood that comes out of them and the pressure that it comes out reaches a level of slapstick.  And they don’t only bleed blood, mind you.  They also shoot out this gross white milky stuff (maybe semen?  Who knows?) that is so disgusting the only correct reaction is laughter. 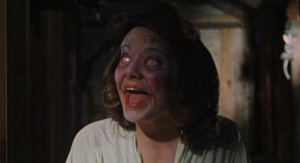 Perhaps Bruce Campbell's attempt to kill this young woman with a wooden plank that is obviously too big for him to carry is scary to some, but...

It’s not only the zombies that are funny, either.  Bruce Campbell’s protagonist, Ash, who was such a badass in the next two films that he literally has a chainsaw grafted to his arm, here is mostly a frightened on-looker.  When his friends start coming after him, he runs into a bookcase and has it fall on him not once, but twice.  He’s right on the cusp of being comically inept.

Beyond the slapstick, the second half of the film is also funny as a meta-comedy.  At a certain point, it becomes clear that this movie isn’t really about an evil spirit torturing five college students but about a director named Sam Raimi torturing his actors and, more importantly, his audience.  Luckily, Mr. Raimi tortures us with such unrestrained glee, that we, the audience, have to just laugh and join in on the fun.

For example, in the second half of the film, Ash goes back down to the spooky basement, only to find an olde-tyme movie projector, which begins to project plain white light on a screen.  For some reason that is never made clear (this is a horror-comedy, after all), enormous amounts of blood start sloshing in through the basement ceiling.  Not only does the blood cause a light bulb to burst open; it paints the movie screen red and ultimately makes the projector explode.  You can almost taste the joy of creation in this scene.  Well, not creation, really, but destruction.  It’s as if Mr. Raimi is saying, “Fuck you, Hollywood establishment!  I’m going to blow up your industry with my silly amounts of gore, and there’s nothing you can do about it!”  I don’t know about you, but when I saw this scene I laughed and laughed.

Another example of Evil Dead’s meta-humor occurs in the second half of the film when Ash, exhausted from his trials, starts sobbing, “You bastards, why are you torturing me like this? Why?”  Theoretically, you can come up with an in-film reason for him to say this line; he could be talking to the evil dead spirits or just the gods in general for screwing with him.  But, to me, it sounds like he’s talking to the people who made this crazy movie.  And why not?  The “evil spirit” who is tormenting these poor kids is never seen in the movie.  Instead, we see various scenes from “his” point of view.  In other words, the monster is the camera, itself—and whoever is behind it.  The evil spirit and Sam Raimi are one and the same.  No wonder Bruce Campbell suddenly became a good actor in this scene.  He was saying this line from the heart. 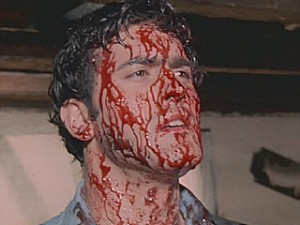 Poor guy. It must have taken hours to get all that corn syrup off.

Tree Rape Is Not Love

Between these two movies—the clichéd B-movie horror flick and the over-the-top meta-horror-parody—is an interesting scene.  The Internet likes to call it “the tree rape” scene for one simple reason: it is a scene in which a female character goes out into the woods and is raped by a sentient tree.  If you want to see this—AND YOU DON’T WANT TO SEE THIS, TRUST ME—watch below:

For the life of me, I cannot tell why this scene is here at all.  Even Sam Raimi couldn’t, which is why not much later in life he explained that he regretted making it at all.  Even if we try to ignore the obvious, awful, unnecessary misogynistic overtones of this bit—though, let me tell you, it is nearly impossible to do so—the scene is still out of place in this movie.

Why?  Well, the problem (aside from the awful, awful, awful misogyny) is that this scene neither fits in Evil Dead the horror flick nor Evil Dead the meta-literary comedy.  If this scene was meant to be the capper of the first half’s horror movie, you would expect it to be scary.  If it was meant to be the beginning of the second half’s postmodern parody, you’d expect it to be silly/funny.

Scary movies reach back to our primal fears, but who here—show of hands—was ever scared of a tree as a kid?  More specifically, how many of you were ever scared of being raped by a tree?

So this scene isn’t really scary for most people, I would bet.  But is it funny?  Does it belong in the gross-out humor part of the film?

I can certainly imagine some people laughing at this bit.  Teenage boys come to mind.  But it’s not really funny, is it?  It’s more… uncomfortable.  Even if you are a teenage boy who thinks rape is hilarious (PROTIP: it’s not), I think the idea of someone having a tree branch forcibly stuck up her vagina with that much force is going to make you squeamish.  Now, you might laugh to stave off your feelings of ickiness, but I doubt you’ll be finding the scene funny-funny.  Especially not if you’re watching this movie with a girlfriend.

If you want to view the tree rape as a comedy bit, then the way it is filmed is very problematic.  It is easy to argue that the zombie gross-out scenes from the end of the movie are meant to be parodic, because they are so extremely unrealistic that they couldn’t really be anything other than a parody.  The tree rape scene, however, is filmed fairly straight.  It is literally just a girl having a tree branch shoved up her vagina.  If there are any elements of parody in this scene, I cannot see them.

In short, Evil Dead’s tree rape is too ludicrous to be scary, but too realistically unpleasant to be funny.  As it neither fits in the first half of the film or the second, it should have been left on the cutting room floor.

13 Comments on “How to Read Evil Dead and Why”