I have to believe that the producers of Glee had Saved by the Bell in mind when they wrote the October 7 episode, “Vitamin D.” In it, Finn is completely worn out from studying, preparing for a big performance with his singing group, and football practice. And in her (highly temporary) new job as school nurse, Will’s wife Terri helps him out with a couple of tablets of decongestant, which she promises will give him the energy to handle everything. Finn is skeptical, but Terri says it’s fine because they’re over-the-counter.

The most famous episode of Saved By the Bell ever aired is probably “Jessie’s Song,” from its second season. Elizabeth Berkley is completely worn out from studying and preparing for a big performance with her singing group (but not football practice). So she starts taking caffeine pills, which she thinks will give her the energy to handle everything. Slater is skeptical, but Jessie says it’s fine because they’re over-the-counter.

But that’s where the two episodes diverge radically. In “Jessie’s Song,” the pills quickly bring America’s sweetheart to the verge of a complete mental and physical collapse.

The important thing is, the pills leave Jessie completely unable to sing at her big audition, ending her dream of landing a record contract. The drugs backfire with horrible consequences. In Glee, not only does Finn perform, he performs awesomely. Watch the stunned expressions on everyone’s faces.

The message is clear: this stuff works. In fact, Glee makes decongestant look so good that I’m tempted to pick up a package. Based on this show, they will probably make me a much better writer. 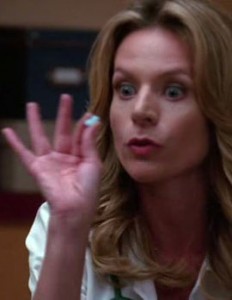 Let’s rewind a little. Finn can’t even stay awake in glee club practice, much less sing and dance. So he goes to the school nurse, hoping she’ll let him sleep for a while. Instead, Terri lectures him:

When I was in high school, I captained the cheerleading squad, I kept a perfect 4.0 GPA, I cultivated my popularity, and I maintained a loving relationship with the boy who would become by husband.

And then she reveals her secret: pseudoephedrine, a key ingredient in over-the-counter cold medications (as well as spelling bees).

Think about what a glowing endorsement that is. Terri says she used it for years, and it didn’t hurt her or wreck her life. In fact, it brought her mind-boggling success–the kind any kid would envy. The writers are basically saying that taking two decongestants a day will give you the energy to do pretty much anything. They not only admit the drug is effective, they exaggerate its effectiveness. Finn leaves glee club practice to visit the school nurse. He returns during that same practice, ready to take on the world. He goes from being a zombie, to being a 28 Days Later zombie. Correct me if I’m wrong, but I’m pretty sure decongestant doesn’t actually hit you that quickly or that hard.

In a later scene, Finn mentions getting new football plays drawn up, and completing a Spanish assignment weeks early. In the course of 24 hours, this wonder drug has completely transformed his life. If you were trying to create an ad for the abuse of Claritin, could you do a better job than this? (Even though Glee doesn’t cite any particular brands, the box of “Decongestant D” Terri waves around looks strikingly similar to Claritin D.) 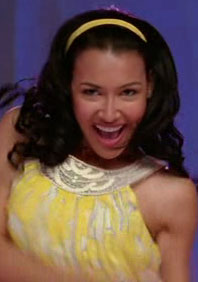 Compare and contrast with Jessie Spano.

And it’s not just Finn, of course. All the boys take decongestant to prepare for their performance, and it brings them to a whole new level. “How were we supposed to know they’d rock the house?” one of the girls complains afterwards. “They’ve never been good!” Then the girls find out the secret and take a little Vitamin D, and their performance is also off the charts. “Ladies, I don’t even know what to say,” Will gushes. “I don’t know what you guys did, but whatever it was, keep doing it!” Here’s the message I’m getting: decongestant will not only let you get all your work done, it will let you do the work better than ever before.

And the writers keep making this stuff look better and better. Terri suggests that Ken Tanaka, the football coach, propose to his girlfriend. He says he can’t because he’s terrified she’ll reject him. She gives him two decongestants, and sure enough, he’s engaged by the end of the episode. So it gives you energy, courage, and maybe even a little luck. And although I somehow doubt this engagement will end happily… pseudoephedrine: is there anything it can’t do?

If there are any dangers to taking this stuff, we don’t learn about it in this episode. Nobody has a Saved By the Bell-style freakout. When the truth comes out, Terri protests that nothing bad happened, and the only thing the principal can say to argue with her is that somebody got arrested for trying to buy 36 boxes. The only hint that maybe decongestant isn’t 100% safe is that Terri won’t give any to pregnant Quinn (a shocking moment of good judgment). 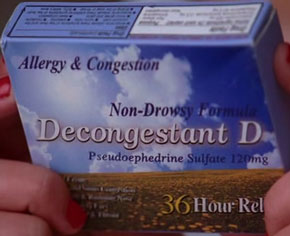 The show’s half-hearted anti-drug argument seems to be: decongestant gives you so much wonderful energy that it’s simply not fair. You will be too good for anyone else to compete. In Glee, decongestant is not a mild performance enhancer, like a cup of strong coffee. It completely transforms you, to the point where you can’t even take credit for your accomplishments. “Even if we win, it’s not going to be satisfying,” says Rachel. Of course, our protagonists are eventually steered to shore by their moral compasses. But given the amazing effects this easily-obtainable substance has, I’m not sure I buy this change of heart. In another episode, Finn becomes convinced that the glee club’s success is the key to him getting a scholarship, and therefore the key to his entire life. If those are the stakes, is he really going to throw out that box so quickly?

And what about kids in the real world? What are they going to think after watching “Vitamin D?” I’d be shocked if there wasn’t one teenager somewhere in America who watched this and said, “Wow, does Claritin really do that?” But before you fire away with your angry comments, keep in mind that I am no longer a Glee hater. I still think it’s  rough around the edges, but it’s grown on me somewhat. (Which is a good thing, because I don’t think anyone else on this site has been writing about it.)

And I don’t particularly care if the show does get kids hooked on decongestant. If it makes them sing that like, maybe it’s a win-win.