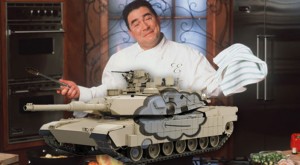 And what’s weirder than weird food?

“Fictional food” is up there with “alien sex” for producing the squirmiest reactions. We’re very self-conscious about how we look when we eat and what our choice of food says about us. And we defend our tastes very fiercely, to the point that treating the weird as normal freaks us out. The way we react to fictional food tells us about the fictional society being depicted, as well as … about ourselves.

Overthinkers – what is the Best Fictional Food?

(And stick around ’till the end for a verdict from our MYSTERY CELEBRITY JUDGE!)

The Klingon race started out as metaphorical Cold War opponent for the Federation, and eventually turned into a catch-all metaphor for otherness in Star Trek. No alien culture on the show was ever as well-developed: Klingons love opera, violent sex and killing each other. And gagh. They love gagh. 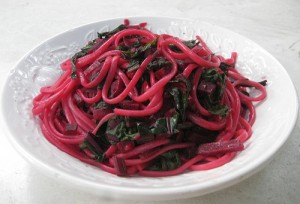 Gagh is a disgusting pile of worms, served alive, enjoyed for the sensation of squirming inside your mouth. Being presented with gagh became an easy way to tell whether someone in Starfleet was badass. If you grab a fistful and grin as you smash the wriggling parasites into your mouth, congratulations, you’re command material. If you have any kind of normal human reaction, sorry, astrometrics for you.

For Klingon characters, though, gagh is just an ethnic comfort food that humans don’t understand. This is why it’s my favorite fictional food. My father is an immigrant, and when I was growing up, we bonded over cooking the food of our noble people – the French. Weird, gross food that made my friends wretch, like paté and mussels. Food that I loved, but isolated me from most other kids in suburban South Carolina.

Klingons don’t complain a lot, but when they do, it’s because something culturally important is being done wrong. “This gagh is dead!” “That restaurant sells gagh to tourists!” The injustice they lament is the slow death of their culture in a galaxy that privileges commerce and technology over a sense of historical identity. That, to me, is so very French, and so very admirable.

If you’d like to cook the (vegan!) gagh in the picture, check out this recipe from the Lazy Smurf. It uses beets instead of deadly parasitic worms. If you want something a little closer to the original, I suggest the shrimp lo mein at the take-out place down the street.

Just make sure you chew it to death before you swallow it. Bon appetit!