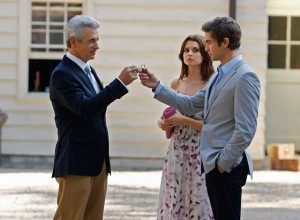 William van der Bilt does something about the Buckleys.

Last night Gossip Girl fired the opening salvo in this season’s class war. Everyone seems to have converted: Jenny loves how the other half lives in the Hamptons (“…salaried servants and an account at the beach club!”). Rufus has abandoned his boho Brooklyn loft and decamped to Lily’s—was it originally Bart’s?—palatial home in Manhattan. Dan has a designer wallet (“Have you seen the stitching?”) full of Benjamins. It’s better to be rich: We’re all agreed.

Except for Vanessa: She hits this week’s high douche mark on the bunched-panties scale when she crashes a Polo match to introduce Dan to her new boyfriend, who, we’ll come to learn this year, is his half brother, a product of a youthful but apparently formative dalliance between Dan’s father and new stepmother. Oh, spoiler alert. But, I digress.

Vanessa arrives on the scene to ball Dan out. She is disappointed that her erstwhile comrade has entirely forgotten how they used to stay up nights sipping weak tea out of chipped, mismatched flea-market mugs and whispering the theory of surplus value into one another’s ears. He’s gotten all shallow and rich and shit, and this will not stand.

Though she protests that she is solely concerned with Dan being himself, the things that seem to disturb her are the trappings, the props: The designer wallet, the expensive sunglasses, the stretch limousine she glimpses him ducking into after he promised he was taking the subway.

She doth protest too much: Her forays into high society as Nate’s sometime girlfriend have shown her to be not at all immune to the attractions of wealth and its trappings. She has a new boy (see “half-brother”, supra) so it’s not that she’s carrying a torch for Nate. (Or is she? “We hooked up in Prauge,” she reveals.) She seems more worried that Dan is becoming Nate, or becoming like him. Come on, Dan—it used to be about the music. And the theory of surplus value.

For example, Nate’s latest tactic in his drawn drawn out individuation is to bring the debutante daughter of a conservative family (“The Buckleys”) to the polo match to spite his grandfather, a Vanderbilt. Politics are certainly alluded to—just barely—but more in the sense of machinations and jockeying for position than of a clash of ideologies. Politics is a status contest as cutthroat as high school.

Vanessa’s tiresome scolding errs in two ways. Her class resentment recapitulates the dynamic of petty tribal resentments she loathes in the moneyed classes she so detests.

But more: She fails to grasp that, at least within the limited scope of the social world Gossip Girl represents, identity is constituted performatively. In taking Dan to task for losing sight of his true character, she appeals to an essentialist authenticity that doesn’t exist in this narrative universe.

Vanessa reveals herself to be what she hates–but we should have noticed this earlier. When Dan first meets her at a café, and reasonably inquires, given her experience as a barista, whether she might work there, she archly pronounces, “I am so done serving coffee.”

Focusing on Vanessa, I have passed over entirely the dramatically promising and thoroughly bizarre sex games of Blair and Chuck. They have been the best thing about the show, and the writers have wisely framed their relationship as a channeling of their catty attacks on one another into catty attacks on the world. I nearly shrieked with glee with each insult Blair hurled at a random parade of passing girls: This one was too skinny. That one too plain. A third… “Catalog!”

Their relationship could quickly get boring. At the moment, though, it’s just right. You’d never catch Chuck worrying about authenticity. He is a free artist of himself. The world, he and Blair understand, is what you make it.

3 Comments on “I Am So Done Serving Coffee: Identity as Performance in Gossip Girl”