[In recognition of the release of The Beatles: Rock Band today, guest writer Trevor Siegler takes us on a walk through their back catalog. Only one of these songs is on the Beatles Rock Band playlist – can you guess which one?] 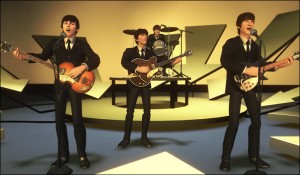 The Beatles are so iconic in our modern pop culture, it’s impossible to imagine a time before their meteoric rise to fame and eventual dissolution. Their songs are legendary, and almost anyone can name more than a handful of their most popular songs: “She Loves You,” “I Want to Hold Your Hand,” “Hey Jude,” “Revolution,” “A Hard Day’s Night,” etc. But on the eve of the world release of “The Beatles Rock Band,” I think it’s time to recognize some of the lesser-known nuggets from the Fab Four’s catalogue, songs that might have been pop gold in the hand of lesser artists but exist as mere afterthoughts or album filler. I’m limiting myself to five for considerations of space, but not from lack of material to choose from. This list could be even longer.

1. I Don’t Want to Spoil the Party (Beatles for Sale)

In the waning months of 1964, the Beatles were trying desperately to survive the first full onslaught of “Beatlemania” with their psyches intact. Their contractually obligated third album, coming on the heels of the first two masterpieces “Please Please Me” and “With the Beatles” (released Stateside with a different track listing as “Meet the Beatles”), was bound to suffer from the lack of time on the road to write new material, much less perfect it onstage in front of screaming female fans. So the lads can be forgiven for dipping in the well of their prodigious record collection for some decent covers. But one of the better originals on the album (alongside the better-known “I’ll Follow the Sun”) is “I Don’t Want to Spoil the Party.” A rockabilly-infused ditty which catches John at his most melancholy, the tune echoes the contrast of “I’m a Loser” by juxtaposing depressing lyrics (in this case, a jealous guy who leaves a party where his girl is obviously having more fun without him) with an upbeat melody. It’s a slight tune, for sure, but it’s one of the first hints that, underneath the bubbly surface of “Beatle John,” there lies the soul of a poet and artist with more personal concerns. It’s no small leap from “Party” to “Nowhere Man,” “Imagine,” and “Jealous Guy.” This is truly one worth seeking out.

1966 was a tough year for the Beatles, what with John saying that they were “bigger than Jesus” and setting off a firestorm of controversy (nevermind the fact that he was essentially foretelling the rise of celebrity cultural icons who dominate the news while more important issues are pushed to the backside). “Revolver” is probably the best album of the pre-“Pepper” incarnation, where the guys are still functioning as a cohesive unit while also indulging in the vices that fame facilitated. “Tomorrow Never Knows,” the closing track on the album, sounds at least twenty years ahead of its time, in terms of how it uses backward taping to add atmosphere to a song. Lennon reportedly wanted to record monks chanting on the top of a mountain, but George Martin wisely kept the boys in the safety of the studio. It’s one of John’s first forays into mysticism, and owes a lot to George Harrison’s recent infatuation with the sitar. In the years to come, the groundwork laid by “Tomorrow” would be explored on “Strawberry Fields Forever” and the Sgt. Pepper album. On its own merits, however, it wouldn’t sound out of place on a Chemical Brothers or post-“Kid A” Radiohead album.

Enough of the John Lennon love-fest, let’s give some credit to his longtime writing partner Sir Paul McCartney. The concept of “Magical Mystery Tour” (the record and TV special) lay in Paul’s decision, following the death of original manager Brian Epstein in August 1967, to take a trip through the country and see what happens. Luckily for the Fab Four and their entourage, they didn’t run into any “Deliverance” territory, but they didn’t run into any interesting locations either. The special has since become a cult hit, and the album (while suffering in comparison with the year’s other Beatles release, “Pepper”) salvaged some interesting ideas by packaging them with already-released singles like “I Am the Walrus.” But of the originals, “Your Mother Should Know” is charmingly anachronistic, an old-fashioned song thrust in the midst of LSD-fueled soundscapes. The music-hall atmosphere of the track suggests the Beatles’ debt to the Brill Building and other “music factories” where songs were written by committee and recorded by prefabricated singers or groups (sound familiar?). One of the great ironies of the bond between Paul and John was the fact that both lost their mothers at an early age. Whether such maternal sadness colors the tune’s bouncy insistence that your mother should know is up to the individual listener, but it helps give a hint to the pop-friendly direction that Sir Paul’s post-breakup career would take, first with Wings and then on his own.

The Beatles could nail three-part harmony almost from the very beginning, when various early lineups whittled down to the core vocalists of John, Paul, and George. Their early records show this extremely well, but as the years wore on such togetherness became a casualty of warring egos and differing visions. So it’s a treat to the ear and the heart to hear the guys harmonizing on “Because,” an almost a cappella tune which is one of the highlights from the first half of “Abbey Road.” In fact, the version available on the third set from “The Beatles Anthology” is a cappella, and is just as beautiful. To get John, Paul, and George in the same room, much less singing at the same time, by this time was nothing short of a miracle. A cynic would say that such layering could be done in production, but it sure sounds like the three-part harmony that made earlier tunes from a happier era so distinctive. It’s highly unlikely that this one will turn up on “Rock Band,” but you should look into adding it to your personal soundtrack if you ever need a quick pick-me-up.

And in the end…the Beatles’ swan song was “Let It Be,” which began life as a movie/album project (Paul not learning a damn thing from the “Mystery Tour” experience), but which was shelved when tensions ran high and Phil Spector ran the recording board into “Wall of Sound” territory, ruining great songs like “The Long and Winding Road” by adding syrupy strings and an angelic chorus. “I’ve Got a Feeling” was one of the songs left from those sessions that captured what the group was trying to achieve, that is, a back-to-basics rock approach that hearkened back to their endless nights of playing in seedy Hamburg clubs. While the group literally revisited old stomping grounds (recording a version of “One After 909,” one of the oldest Lennon/McCartney compositions), “Feeling” was a product of the tension-soaked sessions in which John and new soulmate Yoko Ono sat opposed to anything Paul wanted to do, leaving George and Ringo no option but to leave the band separately for a few days. “Feeling” is a great, stormy rocker, with point/counterpoint vocals from Paul and John which describe the emotions stirred by rock, love and the desire to have a good time. John gets the best lines, of course (“everybody had a hard year/everybody had a wet dream”), but it feels like an honest-to-God collaboration, on a par with “Two of Us” in suggesting that, despite the rancor of the past few years, some bonds will not be broken. That the group broke apart on the heels of this album is perhaps out of necessity; there’s only so much looking back you can do before you have to start looking ahead of you. But brother, wasn’t it a great ride?

[Got any obscure favorites that we missed? Did you guess which song wasn’t on the Beatles Rock Band playlist? Or did you Google it like some Mean Mr. Mustard? Sound off in the comments!]

Or read more from… Featured, Music, Video Games, the beatles

16 Comments on “Unlock The Beatles”