Sort-of spoiler alert: this post deals with a particular scene towards the end of the Inglourious Basterds, so if you haven’t seen it yet and want to go into the theater with a clean slate, you should stop reading now (and get out there and see this movie pronto—it’s a gold mine for overthinking). That being said, I won’t reveal any major plot points, so if you don’t mind losing out a bit on the experience, then plow ahead. 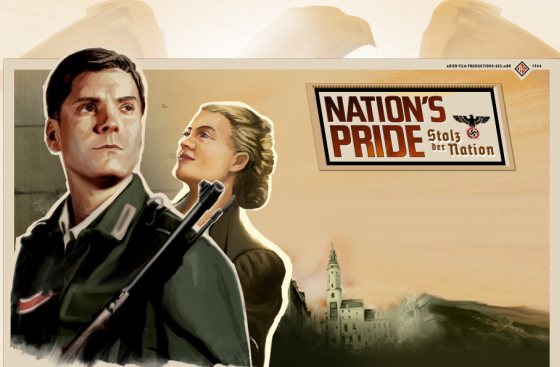 First things first. This isn’t just a Quentin Tarantino movie. It’s a Tarantino movie/fantasy about Nazis. There’s so much to be said about this complex film’s intentions and interpretations that I’d be a fool to try to give the entire movie the Overthinking It treatment in one shot. Instead, I want to focus on Nation’s Pride, the propaganda piece that serves as the backdrop for the film’s climax, and its unsettling effects on a movie audience.

Allow me to briefly setup: The Nazi high command, including Hitler himself, has gathered in a Paris movie theater for the premiere screening of Nation’s Pride, a Goebbel’s propaganda piece featuring a German war hero, Fredrick Zoller. As the Basterds try to execute their half-baked plot to blow up the theater, Zoller mows down wave after wave of American soldiers, and as each bullet splatters American blood on the ground, the Nazi crowd’s excitement grows and grows. They clap and cheer. Hitler is having a grand old time. We the movie audience are meant to be repulsed by the scene of Nazis enjoying Goebbel’s crass display of violence on screen. They’re killing the good guys, and we don’t like that.

During the screening, one of the main protagonists shoots one of the main Nazis in the back. Audience reaction? They clap and cheer, of course. This Nazi had it coming, right?

Oh, wait. That’s what the Nazis were doing during the screening of Nation’s Pride. I think I may have cheered a couple other Nazi killing moments in this movie, and I know I’ve cheered the death of expendable enemies in other movies. Now I feel dirty.

Did Tarantino intentionally sequence these events to elicit a cheer from the crowd shortly after Nation’s Pride elicited cheers from Hilter and Goebbels? I may be giving him too much credit, but Tarantino is an exceptionally deliberate and creative filmmaker. Even if he didn’t specifically setup this particular moment of audience participation, the message is still pretty clear: Tarantino is calling out his audience for reveling in violence much like the Nazis did.

Which is ironic, of course, given that Tarantino is the provider of said violence in this case, and that Tarantino himself often seems to revel in his moments of ultra-violence. But this case somehow feels different. It is a World War II movie, and Tarantino must certainly be self-aware enough to understand the implications of his ultra-violence in this context, especially the movie’s climax (which I won’t spoil if you haven’t seen it yet). And since he fairly explicitly calls out the Americans for their penchant for cruelty–they’re called “Basterds” for a reason–why not go one step further and apply that to the largely American audience as well?

Agree or disagree? Sound off in the comments, but please, do our readers a favor and indicate if your comment has spoilers in it.

"And I want my comments."