She was Princess Toadstool at first. When Super Mario Land was released, there was a bit of confusion over whether Daisy and Princess Toadstool were the same. The crappy movie implied that they were, but Nintendo pretty much laid that to rest. When they brought the Peach name over from Japan, Peach and Daisy officially became two different people, and two different leaders.

Though the actual identities have been cleared up, the connotation of the “Toadstool” name is another matter. How do the inhabitants of the Mushroom World view the Toadstool crown? What does it evoke, and more importantly, how significant is the name Toadstool throughout the regions? In other words, how much power and influence does Princess Toadstool really have over the lands around her?

College-level geography is more complex than knowing the location of a bunch of countries and capitals and rivers. Geography is concerned with how the landscape can be defined and subdued in relation to race, gender, politics, and power. We this more sophisticated geography in the phenomenon of gerrymandering, in looking at the importance of the Ohio Valley in American history, or in exploring the intricate play between nation-states in old Germanic lands. If we apply these parameters to the Mushroom World, the result is a rather startling picture.

The name “Mushroom World” raises our first issue, since it implies that the mushroom people, the Toads, are the only race around. Why is it called “The Mushroom World” despite the fact that Koopas, Piantas, Yoshis, Goombas, and a host of other species exist on this world? There has to be a tremendous amount of power (and vanity) in play here; it’s not like we call Earth “Human World”. Maybe there was a treaty passed, allowing the mushroom people the right to the planet’s name. The result would be a bit one-sided, but more palatable. Still, even if that is the case, then it’s clear that the Toadstool name and influence is pretty far-reaching.

Let’s narrow our inquiry from The Mushroom World to specifically the Mushroom Kingdom and attempt to define what the Mushroom Kingdom actually controls and what it simply supports. As ruler of this kingdom, Princess Peach Toadstool has proven herself wise and capable. Within her capital city of Toad Town, she receives respect and adulation, and hardly anyone questions her authority. So it wouldn’t surprise me that the six “Elemental” regions from Super Mario Bros. 3 (Grass, Desert, Water, Giant, Sky, Ice, and Pipe), although ruled by their own respective kings, may relinquish a lot of their own power to her. 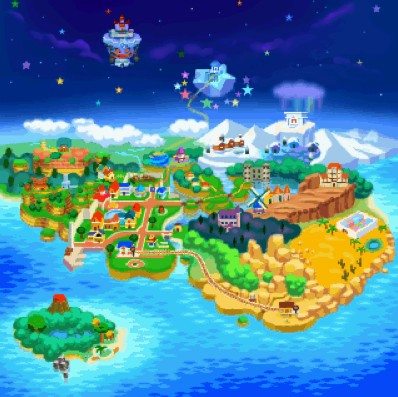 The Mushroom Kingdom from Paper Mario. Clearly the borders are much wider than this.

But there is a darker side to this interplay of political and royal influence; a side that a princess in pink would take care to monitor, to ensure that her status quo continues. There are real, dangerous threats to undermine her power.

One Comment on “Shrooms of Power: Who Really Rules the Mushroom World?”