Enjoy this guest post by Ryan Sawyer on the mysterious metaphysics of the Fraggles.

“The center of the universe is, of course, that marvelous land known as Fraggle Rock.”

These words are narrated to us in the first episode of “Fraggle Rock” by Uncle Traveling Matt, the first known Fraggle to travel into “Outer Space” (our human world). We take what he says with a grain of salt, since the Fraggles, much like the people of our Dark Ages, are a superstitious lot who believe everything in the universe revolves around them. Unlike the people of the Dark Ages, however, he may be correct.

If you grew up in the 1980’s, you’ll recall that one of the tunnels leading out of Fraggle Rock leads into Doc’s workshop, while another tunnel leads into the Gorg garden. These are not the only tunnels leading out of Fraggle Rock (for example, there is another that leads directly into the Gorg castle, and another that opens into the basement of Fozzie Bear’s mother’s house), but these are the two we’ll be examining.

It is never explicitly said where Doc’s workshop is, but clues are given. When Uncle Traveling Matt first leaves Fraggle Rock and travels through the workshop into “Outer Space”, he encounters a group of children, one of whom is wearing a Philadelphia Flyers baseball cap. The child is probably rooting for his home team, unless he recently moved to town or was visiting a friend, which would put Doc in or near Philadelphia. Adding to the other clues, such as the weather (it snows in the winter) and the industrial/urban look of both the workshop and the surrounding cityscape (as seen by Uncle Traveling Matt when he first enters Outer Space), it seems a large, industrial Eastern city like Philadelphia would be the best bet. The Gorg garden, on the other hand, appears completely different. It is a small, decaying castle surrounded by farmland, with beautiful vegetation, clear skies, and nary a car horn or airplane to be heard.

What would be the probable distance between the two? During the opening credits, Gobo escapes capture from Junior Gorg and is dropped back into the Fraggle hole, immediately splashing into Fraggle Pond. This would place the Fraggle hole that leads to the Gorg garden directly above Fraggle Pond, almost as a sort of “skylight” (that would certainly help explain how the underground tunnels are so well-lit). In other scenes, we see Gobo & Co. traveling from the “workshop hole” to the main area of Fraggle Rock in a relatively short amount of time. They don’t appear exhausted or show any signs that it was a long and arduous journey. This would indicate that the trip can be accomplished at a relaxed pace within a reasonable amount of time; let’s say an hour of travel.

We’ll also be generous and say that a Fraggle’s walk is 2-3mph. Incidentally, while 2-3mph is a nice relaxed walking pace for humans, if you’ve ever seen someone walking a Yorkshire terrier or daschund, you know that a smaller creature must move its legs much faster to keep up. But Fraggles obviously aren’t normal Earth creatures, so let’s just pretend that 2-3mph is their casual walking pace. So, with a sixty minute walk traveling 2-3 mph, the distance between Doc’s workshop and the main area of Fraggle Rock (and therefore, the Gorg garden) is probably 2-3 miles.

Are we supposed to believe that the Gorg garden exists merely 2-3 miles from Doc’s workshop in Philadelphia? I’m sorry, but if you travel 2-3 miles from ANYwhere in Philadelphia, you’re not going to end up in a beautiful, serene countryside. In addition, the Gorgs are 22’ tall, and you’d think someone would notice (unless the Amish aren’t telling us something).

“22’, you say?” Yes, we say. Let’s consider the size differences between species. Using Doc and Sprocket as our point of reference, a Fraggle comes up to about Doc’s knees, which would be about 22”. When a Gorg picks up a Fraggle, however, the Fraggle is only the size of a small doll or action figure, which would put the Gorg at about 22’. Here’s a handy comparison chart: 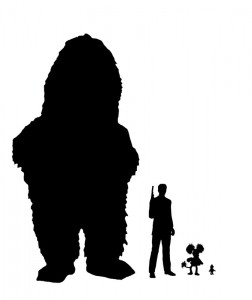 As you can see, Gorgs are friggin huge. To give you an idea of just HOW big, the giraffe is the tallest land animal on Earth and can grow up to 19’ tall. A Gorg is 3’ taller than the world’s tallest giraffe. I don’t care if they’re TWENTY miles from Philly, three 20’+ monsters taking up at least a few acres of valuable Pennsylvania farmland are not going to go unnoticed by the general populace. That means that the Gorgs must live in a world not on this Earth.

In episode 404, “Uncle Matt’s Discovery”, after Matt returns from his journey in Outer Space, he discovers a cavern located beneath the main caves of Fraggle Rock. This cavern is a labyrinth of passageways, each marked by an arch. When touching each arch, Matt is instantly transported to another world. Most of the arches take him to places on Earth, but at least one of them takes him to a world where golden apples grow, and this land is guarded by a blue dragon. It is safe to say that Matt has seemingly discovered an infinite network of portals to any number of worlds (Matt is very excited about this, because he’ll save money by not having to buy postcards to send to Gobo).

It then stands to reason that Fraggle Rock is not simply a truck stop between the two wormhole openings (Philadelphia and Gorg World). It is actually a space where all dimensional portals converge.

“So when the Fraggles go through the Fraggle holes, they’re actually traveling to other worlds?” Absolutely, yes. We have now determined that Fraggle Rock is a nexus of dimensional portals. There does appear to be some “bleed” or “seepage” between worlds, though, since some of Doc’s plumbing can be seen sticking out of the walls in Fraggle Rock. This would indicate that the portals are unstable at best, and possibly even deteriorating. Sounds a lot like Stephen King’s “The Dark Tower” series, doesn’t it? I won’t go into the DT/Fraggle connections here (Gobo’s ka-tet, Sprocket and Junior Gorg as Guardians of the Beam, etc), but it’s something to think about.

In addition to being trans-dimensional travelers, Fraggles possess some other interesting abilities. For example, they’re telepaths. If one Fraggle falls asleep with its head touching another Fraggle’s head, they can enter each other’s dreams. This can be done in a chain with any number of Fraggles (episode 206, “Boober’s Dream”), opening the possibility of making group decisions while asleep. There is no “leader” of Fraggle Rock (just some elders that Fraggles use for ceremonies or advice), so making decisions as a telepathic hive mind wouldn’t be out of the question. They’ve also shown on at least one occasion (episode 508, “Mokey, Then and Now”) the ability to time-travel. It wasn’t done on purpose, but I’m sure with enough practice and training, they’d be able to do it at will.

Ok, so Fraggles are 22″ telepathic creatures that can travel to any point in time and space. How does this affect us, the human species?

Fortunately, the Fraggles as we know them are fun-loving, carefree vegetarians, so any sort of “invasion” would probably consist of a lot of smiles, handshakes and “Glad to meetcha!” They weren’t ALWAYS this nice, though. Years and years ago, the Fraggles of Fraggle Rock were at war with the Fraggles of Fraggle Cave. Cave Fraggles are colored mostly brown and gray, and they don’t enjoy laughing or singing or any of the jolly, harmless activities we associate with Rock Fraggles. Not to say that they’re evil Fraggles, they’re just lacking the joie de vivre that Rock Fraggles possess. This lack of humor was the cause of their war, which lasted many years. Even to this day, the Rock Fraggles and Cave Fraggles only stay at peace because they live so far from each other.

When Mokey was taken prisoner in the Cave as an “enemy Fraggle” (episode 217, “Fraggle Wars”), she was guarded with weapons, and a truce was brought about only when the two elder Fraggles from each camp were hit in the face with a pie (wouldn’t it be great if ALL wars could be settled that way?). That’s all well and good now, but the fact remains that even the fun-loving Rock Fraggles have it in them to wage war. They even created a weapon to use against the Cave Fraggles, as seen below. 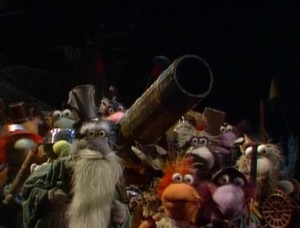 I told you they'd listen to Reason. (image c/o muppet.wikia.com)

That thing looks like it could so some serious damage, especially in a cave. “Oh, is this where you raise your Cave Fraggle babies? *KA-BOOM* ALL YOUR CAVE BABIES ARE DEAD! STAY OUT OF FRAGGLE ROCK!”

Long story short, God help us all if the dimensional nexus of Fraggle Rock becomes too unstable and they decide “Outer Space” should be their next dominion. Just imagine what an hostile invasion of Fraggles would be like. First, they’d use their network of portals to send spies into our homes at night, reading our thoughts and finding out what scares us most. Then they’d use the Doozers, an army of the hardest working creatures on the planet (they’re born with hard hats on), to create some nightmarish machines. Then the two rat-things that hang around near Trash Heap (Philo and Gunge) would give the nightmare machines life in the same way they gave life to Trash Heap (explained in episode 307, “Home Is Where The Trash Is”). These sentient golem machina would then march forth into Outer Space, destroying all opposition and paving the way for the Fraggle Reich to seize control of our planet.

“A Fraggle is, most assuredly, the best of all possible creatures.” – Uncle Traveling Matt

Buy it? Deny it? Tell us in the comments!

4 Comments on “The Transdimensional Fraggle Threat”