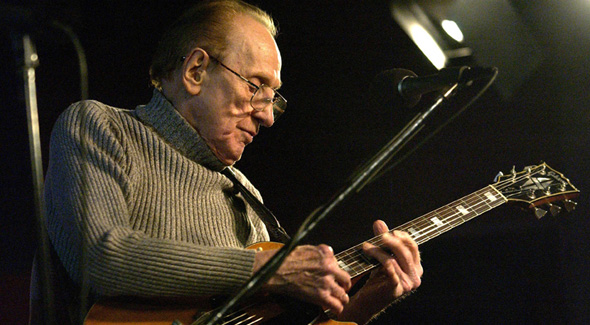 No, I’m not referring to T-Pain (or Andy Samberg, for that matter). The musical innovator in this case is Harold “Dr. Andy” Hildebrand, the inventor of the infamous Auto-Tune pitch correcting/distorting software.

At first blush, the inventor of the electric guitar and multitrack recording and the inventor of Auto-Tune are worlds apart. One was a virtuoso guitarist and inventor; the other was a software engineer who based his pitch-correcting algorithm on seismic studies for oil companies. One’s innovation made rock ‘n’ roll possible, the other’s innovation made, um, this possible…

So what to Les Paul and Andy Hildebrand have in common? Putting aside normative judgments on pop music, I can state with confidence that Hildebrand is just as influential of a music innovator as Les Paul. His software is used in the vast majority of commercial pop music recordings, and the extreme T-Pain style usage of the software has left an indelible mark on the pop culture landscape of the last few years.

But few would put Hildebrand in the same ballpark as Les Paul. This is understandable, given that mainstream society places great value in both the Les Paul guitar and much of the music created by it…

…and that mainstream society ridicules the vocalizations of T-Pain and Kanye made possible by Hildebrand’s software.

Led Zeppelin is timeless. T-Pain and Kanye will be relegated to the dustbins of pop culture has-beens.

Les Paul and his guitar left an indelible and overwhelmingly positive mark on pop music. Andy Hildebrand and his software are leaving an ugly stain.

Second, and perhaps most importantly, we have no idea how history will look back on even the most extreme Auto-Tuners such as T-Pain and Kanye. In fifty years, perhaps we’ll regard Auto-Tune as just another effect to apply to an instrument (the human voice), much as we regard amplification and tape echo as totally legitimate effect to apply to a guitar (both were essentially invented by Les Paul). Perhaps these notions of the purity of the human singing voice will fall by the wayside, and Andy Hildebrand will be lauded as a great musical innovator and enabler along the lines of Les Paul.

Or perhaps not. It’s too early to say what Hildebrand’s legacy will be.

As for Les Paul, his legacy is clearly a great one, and I celebrate it as I mourn his passing.

May Hildebrand be so lucky as to be this highly regarded in death.

5 Comments on “The Legacy of the Musical Innovator: Les Paul and Andy Hildebrand”