We join the rest of our generation in mourning the passing of John Hughes this week at age 59.

Why did Hughes and his teen-friendly comedies appeal to our generation in a way that subsequent directors did not? We can speculate all day, but I think it was for two reasons.

First, Hughes’ stories depicted an inversion of the natural order, in which kids acted like adults and adults acted like kids. Whether it’s the monomaniacal slapstick of Principal Feeney in Ferris Bueller’s Day Off or the insecure bullying of Mr. Vernon in The Breakfast Club, grown-ups in Hughes’ films play comic relief in all instances and a foil for our heroes’ glories at best. The kids, meanwhile, get at least one scene where they can be responsible human beings who talk about their problems as if they can find reasonable solutions. Five teenagers from different social circles will confess their vulnerabilities and recognize their common humanity if you lock them in a library all day. The rich kid will tell you he always loved you and that you were so much stronger than he was – at Prom night, too, in front of all your enemies. 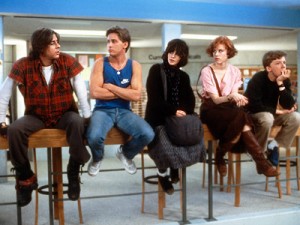 Second, Hughes mixed an entertaining magical realism with a grounded touch of reality.

When Brian asks “what happens” on Monday morning, after the Breakfast Club gets out of Saturday detention, Claire has to confess what we already know: “if Brian came walking up to you in the hall on Monday, what would you do? […] I know exactly what you’d do, you’d say hi to him and when he left you’d cut him all up so your friends wouldn’t think you really liked him!” These five kids can run from the Principal, dance to pop music and scream so loud that they shatter glass within the magical confines of the library. But when school starts it’s a different story.

It’s the same in all of his best movies. Ferris Bueller can take over a parade float and sing The Beatles, but he has to go back to school tomorrow. Duckie might throw himself at Andie’s feet, screaming Otis Redding, but that’s not going to get Andie to love him. Hughes’ films never deny the realities a teenager knows to be true – and nothing alienates a teenager quicker than that sort of phoniness – but he does give us a glimpse of hope.

And third, of course, there’s the soundtrack.

We aren’t forgetting about you, Mr. Hughes. Not yet.