In the Thriller music video, Michael and his date have the misfortune of passing by a graveyard right as the dead start to rise. To make matters worse for MJ’s girlfriend, he becomes zombified as well. In most zombie movies, this is the part where she gets her brains eaten. But this is not a standard Zombie Apocalypse. This is a Thrillerocalypse.

Sadly, YouTube isn’t letting me embed the actual dance. But here’s some Filipino prisoners giving it their best shot.

My question is: why do the Thriller zombies dance? The obvious answer is: it’s a music video, and people dance in music videos. However, I think there might be a plot-driven reason too. 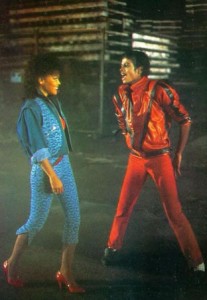 Consider Vincent Price’s iconic monologue. In the music video, it accompanies the scene where the zombies rise out of the cemetery, so we can safely assume he’s referring to them specifically.

The second stanza sheds some light on the dancing.

You get what he’s saying? These zombies aren’t just attacking people indiscriminately. They’re specifically targeting those “without the soul for getting down.” In other words, bad dancers.

And how are they to know who’s got soul? They’ve got to see them in action. 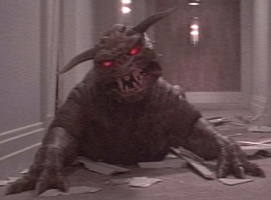 The hound of hell?

So here’s my theory: the zombies in Thriller are actually testing Michael’s girlfriend. Or rather, they’re trying to test her, but she doesn’t understand what they want. Instead of joining in the dance and proving her ability to get down, she runs away, at which point the zombies stop dancing and start chasing. Perhaps they assume that anyone who won’t join in the Thriller dance has no soul for getting down, which actually seems pretty fair to me.

Now keep in mind, Vincent Price doesn’t say that those with the soul for getting down will be left alone. He merely says that they won’t face the hounds of hell. Which is good to know, but a far cry from total safety. We’ve already established that these creatures are in search of blood, so maybe they’re going to eat the people who can dance, and bring the people who can’t dance to the hounds of hell.

But one thing is clear: if you do not have the soul for getting down, you are screwed. You are hound-chow. So people, if you’re ever faced with dancing zombies, just go with the flow. It’s your only chance.

BONUS OVERTHINKING: When Michael and his girlfriend exit the movie theater, the marquee says “Thriller,” with Vincent Price’s name above the title. So presumably, the werewolf movie they were watching actually stars Vince Price. Any guesses what it’s about? Maybe Price plays a grizzled old werewolf hunter, who arrives in a small town after a series of gristly murders. The locals think he’s a crackpot, and maybe even the murderer. But eventually the local sheriff (a young Jeff Bridges) comes to trust him, and they team up to kill the beast.

8 Comments on “How to Survive the Thriller”