Today, guest overthinking correspondent Mike Litzenberg (Mike from LA to podcast listeners) sends this first report from his visit to the E3 conference. (While we’re on the subject: We would love to improve our coverage of videogames. Do you overthink while you overplay? Give us a shout.) This first post collects some observation; we’ll post his overthinking later in the week. 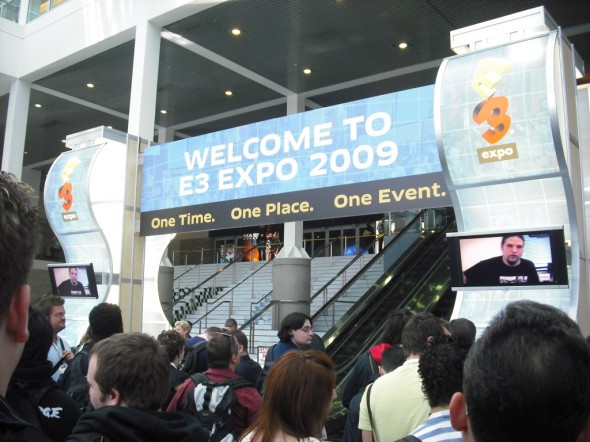 Though not by any stretch of the imagination what you would call a Gamer, I had the great fortune of spending the day at the Electronic Entertainment Expo (E3)—the video game industry’s largest annual trade show—and thought that I ought to attempt some overthoughts on my experiences there. 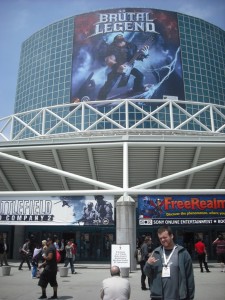 So with the day’s level eleven sensory overload piping hot fresh in my mind, and my fingers doing the nervous bagel bite-sized laps caused by a day on one’s feet in a place where off-brand energy chemicals are a promotional gratuity but water runs you four dollars a bottle, I will endeavor to sort it all out for your edulightentainment.

My close associates and I arrived at the Los Angeles Convention Center at 10a on Tuesday, June 2nd, 2009. Theoretically, the convention is by invitation only: it is free to industry professionals but several hundred dollars for everyone else. The truth of the matter is that what qualifies as industry when applying for a pass is decidedly quite liberal; the “industry” apparently includes my friends David, a professional extra, and Vince at a risk management firm. Thus, the glimmerings of inferiority found in an entry level professional at a VIP event were thankfully erased from my mind, my group and a couple thousand guys from across the Kevin Smith look-alike spectrum waited two hours for the convention doors to actually open.

As I said before, video games are not my true passion, historically. My degree is in Film Production, and my primary interests are in screenwriting and media editing, but I learned Adobe After Effects as a résumé sweetener for the latter, and it somehow landed me in a job at a company that does facial animation for some movies, but primarily games (Watch this example). So coming in with that perspective, the two games I was most looking forward to seeing were Batman: Arkham Asylum and Ghostbusters: The Video Game.

Neither disappointed, though the difficulty I had with the controls for GB was painfully obvious to the Sony rep trying patiently to coach me through some tutorial busting. The Batman game is freaking rad, the writing, design, and action of which are very clearly the products of grown-up Batman fans for others of the like. These two games alone make me desperately want to own a Playstation 3. As a matter of fact, I’m establishing my own Overthinking It contest: girls were passing out free passes to the Spearmint Rhino on the way out of the convention center, and I somehow wound up with like ten of them. If you (or your mom) will somehow get me a PS3, I will take you and your eight closest friends (or your mom) to the Spearmint Rhino.

[Ed. Note: This is not actually an Overthinking It contest.]

I played a soon to be released fighting game called “Teenage Mutant Ninja Turtles Smash Up” that was fun, albeit clearly a watered-down version of Nintendo’s Super Smash Brothers, at least at this stage. A developer who talked about the game with me explained that it was not based on one particular TMNT canon (Is this a contradiction? I think if you know the Ninja Turtles, you will agree with me that it is not.), but that they had gone through all of the iterations of the franchise in picking out the mostly-unannounced characters for the game. Despite offers of Xtreme Gratitude, he would not tell me if Bebop and Rocksteady or the Rat King would be in the game, but if they are, I will buy the game.

It seems to me that these three games actually have a lot in common in terms of their relationships to their respective franchises—Ghostbusters, Batman, and TMNT. They all have a history of video games as long as the History of Video Games. This, this, and this should fill you in on those histories if you don’t know.

But these new entries reverse this. Ghostbusters: The Video Game is a Ghostbusters work that takes the form of a video game rather than the other way around. It was written by Dan Aykroyd and Harold Ramis! Though I am justifiably not as excited as I was last summer for the Dark Knight, I am probably as excited to get my hands on Batman: Arkham Asylum as I was for Brian Azzarello’s graphic novel “Joker,” and while I don’t see it as a blight on my Batman cred that I have never even seen a frame of the Batman Begins game, with Arkham Asylum it might be different. The Ninja Turtles developer’s words are true of each of these games: they’ve picked and chosen the tastiest dishes in the franchise cafeteria to create an original series entry. If you look at Marvel’s upcoming game Ultimate Alliance 2 on the next page, you will see similar characteristics.

Later this week, some more general thought on the conference and video game industry from Mike.