[This weekend, a guest post from frequent contributor Trevor Seigler.] 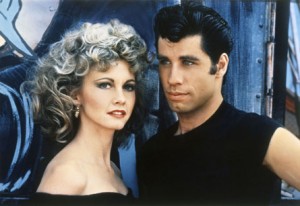 Golden lads and girls all must…

From the minute that I first discovered girls, I discovered that they all universally loved Grease and therefore expected me to not only patiently sit through a screening of it but somehow also share in their enthusiasm for it. This is a heavy burden on any male, and I have trooped through multiple viewings so often that sometimes, when it crops up on some late-night VH1 time slot or in the middle of a lazy summer afternoon, I will indulge in some fond fake nostalgia for a version of the Fifties which never happened and catch a few minutes or two, before remembering that this is Grease I’m watching, the Red Sox game is a few channels over, and I might want to turn it there as soon as possible.

My attention has forever been seized, however, by the resolution of the film’s central plot device (that is, the prolonged separation of the star-crossed lovers Sandy and Danny). Over the course of the film, Sandy and Danny hook up, break up, hook up, have a misunderstanding, and break up, only for Sandy to tramp herself up for Danny’s benefit and share a painful-to-watch musical number at the spring carnival.

Why is it painful, you might ask? I’m of the opinion that Sandy (as played by Olivia Newton-John) was hotter as a Sandra Dee clone than in her Joan Jett get-up at the end, if only because you knew that Sandy was nowhere near as squeaky-clean as her appearance suggested. Sure, it represents the liberating sexual power of rock and roll, but it’s a shame that the sexual liberation of Sandy ended up with her as a leather-clad cliché. I get the feeling that she’s said “you’re the one that I want” to a lot more guys than Danny.

Anyway, after the reunion, there is more singing and dancing (it’s a musical, after all; that’s part of the deal). But then Danny and Sandy ride off in a classic car and…fly away. They literally fly off into the sunset, negating the closing number’s promise to “always be together” with the other mooks on the ground whose cars don’t have the capacity for flight. From the first time I saw the movie until the most recent time I caught it on basic cable, the same question has plagued me when the movie is over: “What the hell was that?”

One might argue that I need to suspend my disbelief a little more, to accommodate the concept of Danny’s flying car shepherding the young lovers away for some aerial booty-knocking. Maybe they’re right, but my ability to suspend disbelief has already been stretched to the breaking point by then. As with any musical, Grease asks you to believe a lot of things:

Add to this the concept of the film’s protagonists flying away at the end, and you have a concept of reality that resembles the paranoid delusions of a madman, or of a playwright trying to recast a decade that witnessed armed nuclear proliferation and the emergence of rebellious subcultures such as the Civil Rights movement and the Beats as a happy-go-lucky sing- and fuckfest unparalleled in its scope and potential to inspire subsequent generations to sing and/or fuck. It’s a little too much, I say. Just a little too much.

But how are we as an audience supposed to take the end? Is it the literal truth that Sandy and Danny fly off together? If so, what fuels their escape from the boredom of Rydell High? Is it their love, rock and roll, or some advanced technology that powers their car into the stratosphere?

Putting aside the mechanics of Fifties car flight, the meaning of the ending is a little hard to discern. One might be moved to ask if the flight symbolizes Danny and Sandy’s ascent into heaven, where they will be technically dead. The film has already had one such allusion to the after-life, in the form of the “Beauty School Drop-Out” number. Frankie Avalon is the “Teen Angel” in the fantasy sequence, where Frenchie is serenaded and implored to go back to high school. You could assume that Avalon is merely a figment of Frenchie’s over-caffeinated imagination, but he’s clearly a heavenly apparition, as denoted by his listing in the credits.

The existence of an afterlife therefore does come up in the film, and it gives credence to the argument that Sandy and Danny’s magical flight is a death in a sense, or at least a more tidy way of having them shuffle off their mortal coils (which have helped keep them apart throughout the course of the film) and find happiness only in the clouds of permanent absence.

So there you have it: Sandy and Danny die at the end. They’re the Romeo and Juliet for the Space Age, star-crossed lovers whose journey takes them beyond the bounds of the already flimsy reality of the movie musical and into something much more profound. Their final exit from Rydell High is tinged not with the mournful funeral dirges of an earlier time, but accompanied by nostalgic Fifties-style rock and roll singalongs. Let’s face it, the film couldn’t end any other way, unless you are willing to consider that Danny and Sandy re-enact the Icarus myth and crash into the gym, unable to continue their journey amongst the clouds.

3 Comments on “Final Destination: “Grease” and the Afterlife”