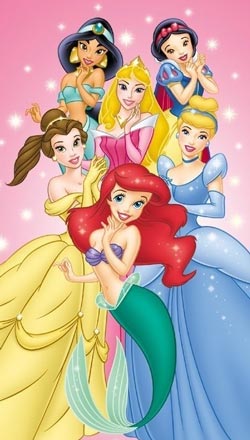 What is keeping Ariel upright?

Unless you have hung out with a little girl during the past ten years, you may not be aware of the Disney Princess phenomenon. Sure, Disney’s had princesses for years, and generations of girls have wanted to be them. But it wasn’t until 2001 that the company got around to creating an official Disney Princess brand, selling apparel, toys, videos and pretty much everything else that they could slap a picture of a princess onto. The New York Times reported that there are 25,000 products in all, and the franchise grosses over $3 billion a year. And that article is three years old.

There’s a lot of be disturbed about here. Some of the older Disney films are pretty retrograde to begin with—Sleeping Beauty meets the prince on her 16th birthday, and marries him pretty much the next day. The newer heroines are better role models, but in the context of the Disney Princess brand, they’re presented as pretty little flowers, not women of action.  And I don’t need to point out that all of them make Nicole Richie look fat.

But I’m not going to discuss the feminist implications of this marketing juggernaut. (If that’s what you want, the Times article above does a good job.) Instead, look at this photo of the Princess lineup. Four of the girls are princesses by birth (Sleeping Beauty, Jasmine, Snow White, and Ariel). One of them marries a prince to become a princess (Cinderella).

That leaves Belle, who I’m not sure really qualifies.

The very first line of Beauty and the Beast explains: “Once upon a time, in a faraway land, a young prince lived in a shining castle.”

I have no idea what makes the castle a “shining” castle. Maybe it has the ability to communicate telepathically with Scatman Crothers. Presumably, the faraway land is France. So what is the prince the prince of? Not France itself—I know what Versailles looks like.

Here’s another weird thing: the castle has only been enchanted for ten years (“Ten years we’ve been rusting/needing so much more than dusting”). How has this castle been so completely forgotten in just a decade that no one even remembers it’s there? 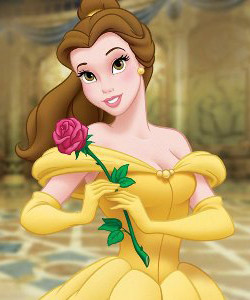 I might have a theory. We know the prince was 11 when he was enchanted (he needs to find true love by his 21st birthday). So presumably, his parents are still alive. That’s why he’s the prince and not the king. But where are these parents? They definitely don’t appear in the movie. And why didn’t they answer the castle door when the old woman came asking for shelter?

Well, the prince is kind of a royal brat—maybe his parents sent him away to live in his own castle. It’s not so far-fetched. In the olden days, male children from wealthy families used to leave home for school all the time. So maybe the prince is at this French castle to attend an elite private school nearby. Just like Hamlet going to school in England, he may be the prince of an entirely different country.  Norway, for example.

This might actually explain why the locals don’t seem to be aware of the castle. It’s not actually the seat of government for anyone in those parts. It’s just a place for the prince to chillax. So why have the prince’s parents not come to bring him back to Norway? Well, I’m betting that when King Magnusson heard his son had gotten the whole castle enchanted, he said, “Serves that punk right.” There’s probably another, less douchy son in line for the throne anyway.

The issue of whether Belle is a princess hinges on whether the Beast is still a prince. And although we don’t know for sure, I’m inclined to say yes. He was only 11 when he was enchanted, which means his father was probably pretty young too. Sure, life expectancies were shorter back then, but the odds are good that the Norwegian king is still alive.

Of course, Disney doesn’t particularly care whether these women are actually princesses or not. Pocahontas and Mulan are part of the Disney Princess line, even though they’re definitely not royalty. (The irony of including Mulan is pretty rich, since she’s the tomboy who absolutely hates dressing up pretty.) Interestingly, those two are often left out of Disney Princess group portraits. A cynical observer might wonder if it’s because they’re not white. But the New York Times says that:

Their rustic garb has less bling potential than that of old-school heroines like Sleeping Beauty.

Oh yeah. And Ariel’s seashell bra is so glamouous.

26 Comments on “Belle: Princess or Not Princess?”