[First time guest writer Ferrett Steinmetz sends this dispatch, considering the implications of Up. It’s spoilerrific, so the whole thing is after the jump. Proceed at your own risk.] 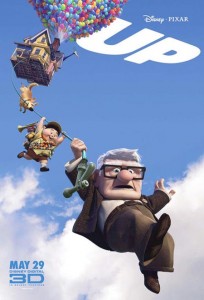 The end of Pixar’s UP is a little disturbing even if you’re not thinking terribly hard: having murdered the dastardly explorer Charles Muntz, elderly widower Carl Fredericksen steals his blimp and his dogs.  Remember, kids, if you can kill a killer you get to keep his cool toys, and no court in the land will ask where you got them!

Yet there’s another aspect of UP which is even more disturbing: namely, the dogs.

Carl Fredericksen has a ship full of devoted dogs.  Those dogs will require a lot of food in the days to come; heck, a shot during the credits indicates that the dogs are now breeding wildly, as Doug and some unknown mate have produced an astounding litter of puppies.  Carl is, ostensibly, in charge of a ship full of at least fifty dogs.  That’s a lot of kibbles to purchase on a balloon-seller’s pension….

…assuming the dogs want to eat kibbles, of course.  There’s evidence that they’re fussier than that.

First off, let’s look at Paradise Falls, the place the dogs have called home for as long as they can remember.  While it is traditionally a South American jungle in some ways, the place we’re shown is oddly barren of life. Aside from Kevin the bird, a toad, and a handful of bugs, we see no other wildlife present in Paradise Falls.  And why would there be?  There is a pack of feral dogs roaming about constantly, forever on the hunt, barely restrained, devouring whatever life is present.

As an explorer, Charles Muntz has no compunctions about putting a small child’s life in danger and he certainly has no illusions about nature, red in tooth and claw; it can be reasonably concluded that Muntz does not feed his dogs, but rather allows them to hunt wild game.

But even more disturbingly, what do the dogs refer to Russell as?

These dogs live in a jungle, for Christ’s sake.  When would they have even seen a mailman for comparison?  Sure, it’s amusing to believe that hatred of mailmen is written into a dog’s DNA, but the truth is that dogs have to live in a city for long enough to interact with mailmen and get to know them before acquiring knowledge of them.  Admittedly, the fairly educated dogs could have read about mailmen, but given that Muntz has to refill his supplies of his champagne and elegant food somewhere, this is a strong indication that Muntz takes his packs of dogs with him when he goes back to town, as is clearly seen in the opening newsreel.

Furthermore, Muntz is heavily implied to be a murderer when he knocks the wooden heads off the table, and one can only suspect from the way the dogs react so eagerly to the word “treat” that, perhaps, a treat is a little more than a bit of beef jerky.  If you’re a murderous explorer, what would be a good way to get rid of the evidence?  Especially when you have a bunch of hungry dogs who love bones?

Yes, folks; those dogs have dined on human flesh.

But it gets worse.  What has Muntz been doing for the past seventy years? He clearly leads an extravagant lifestyle, and yet has seemingly done nothing but hunt his bird for the past seventy years; he’s been disgraced by his community, so it’s unlikely that he can make a living academically. Even a good amount of stockpiled riches would be hard-pressed to weather several depressions… And Muntz is, if anything, a very practical man.

The dogs know what a mailman is.  They have tasted human flesh.  They get brought to town periodically.

All this adds up to the horrific sight of the Spirit of Adventure floating down from the skies over some innocent, rural town with a low population. The locals see the blimp and joyously rush to meet this strange sight… At which point the ramp lowers and a pack of ravenous, bloodthirsty dogs rushes out, eager to kill everything in sight.  The dogs feast, using their excellent sense of smell and communicator collars to track down every survivor—at which point Muntz ambles down to strip the town of canned goods and life savings.

It appears to be a happy ending.  But truth is, Carl Fredericksen is now the captain of a hell ship full of starving, murderous dogs who will, eventually, start to beg for food.  The question is whether they’ll accept Alpo.

Or read more from… Movies, dogs, pixar, spoilers, up

3 Comments on “The Horrific Underbelly of UP”