The following article is 100% spoilers, so if you haven’t seen the J.J. Abrams Star Trek reboot, don’t click the “more” button below.  But that leaves me in a bit of a pickle.  I can’t have spoilers on the OverthinkingIt.com main page, but I also need to fill this space with some sort of introduction.  So I guess I’m just going to say that this article has to do with Uhura from Star Trek, and also here’s a picture of Sulu without a shirt on to fill space: 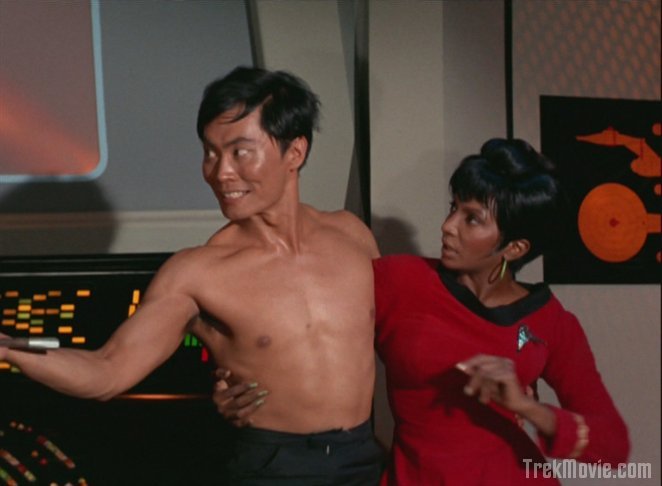 If you are ready for the spoilers hidden below, continue on, dear reader…

Okay.  Since you clicked on the “read more” link, I know that you’ve seen the new Star Trek movie.  First of all, how sweet was that movie?  I know.  It was totally sweet.  Man.

All right, I’ll grant you, it wasn’t perfect.  There was that part where Spock maroons Kirk on Delta Vega and he just HAPPENS to run into old Spock, who just HAPPENS to be there, on a planet that just HAPPENS to be close enough to Vulcan so he can see the destruction of his home planet but far enough away that he’s not affected by the humongous black hole that swallowed it, and then Kirk and old Spock just HAPPEN to run into Scotty who was sent there after getting into trouble with Enterprise’s Admiral Archer who must be like a billion years old by the time of the movie but OK, we’ll give J.J. Abrams that and chalk it up to “suspension of disbelief.”

No, that’s not what I’m going to talk about.  I’m going to talk about that part where young Spock watches his beloved mother die before his eyes, right before his entire planet is destroyed, along with basically his entire species, plus he keeps getting into fights with this brash young Jim Kirk who thinks he knows what he’s doing but really is the most illogical person in the Universe and also rides a dumb motorcycle.  If I were Spock, I’d be in a real bad mood right then.  “Emotionally compromised” to say the least.

So young woobie Spock is trying to maintain his composure before dissolving into a puddle of adorable half-Vulcan tears, and what happens next?  He steps into a nearby turbolift and GETS MOLESTED BY UHURA. 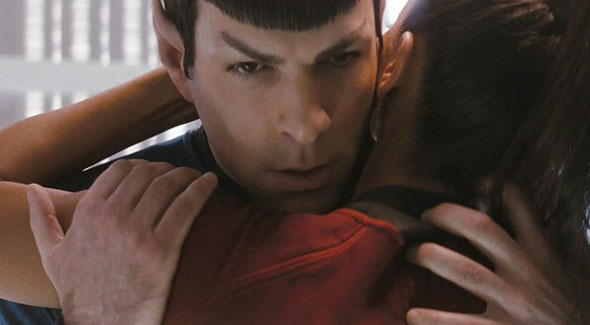 Spock doesn't know how to feel about this.

I know what you’re saying, readers.  “Uhura wasn’t molesting him!  She was trying to comfort him.  With her smooches and her hot, hot Uhura body.”

I will admit, it was a sexy scene.  But imagine we switched the genders.  A young woman is in an emotionally compromised state, having witnessed the murder of a parent and the genocide of her people.  She is on the verge of some kind of breakdown.  So she goes into a turbolift to head to her quarters, and who should appear but Male Crewmate?  Male Crewmate starts caressing her all hotly, kissing her face, saying, “Hey, baby.  What can I do for you?  You look sad.  You look like you need some comfort.  Luckily I have some comfort…in my pants.”

All right, that’s not exactly what Uhura said, but it’s clearly what she meant.  And when the genders are reversed, the scene gets kind of creepy.  Actually, hell with that.  It’s creepy when Uhura does it!  What kind of person tries to take advantage of another person like that?  I wouldn’t be all that surprised if Kirk tried something like that, but Uhura?  Just give Spock a hug and be done with it!  You don’t have to sexually assault him to make him feel better, Uhura!

I guess the level of creepiness in the turbolift scene depends on your assumptions about Uhura and Spock at that point in the film.  We know from earlier in the movie that the two have some sort of relationship.  Remember, Uhura complained to Spock that she wasn’t assigned to the Enterprise but the Farragut, and he said he did it to diffuse any rumors of favoritism.  Uhura then gives Spock an, “Oh no you didn’t” look, and he immediately caves and lets her follow him to the Enterprise.

From that scene, we know that Uhura and Spock are not just student and teacher.  Otherwise, why would there be rumors of favoritism at all?  And, otherwise, why would Spock give into Uhura’s demands so quickly?  No, they are at minimum good friends outside of the classroom, and, at maximum, full-time lovers.

Now, let’s review the turbolift scene under these two conditions.  In the first scenario, Uhura and Spock are just good friends, and the turbolift scene is super-creepy.  It suggests that Uhura has been crushing on Spock for a long time (which, by the way, seems to be part of The Original Series’ canon from the episodes I’ve been watching lately).  Being all Vulcany, Spock hasn’t put out.  So now creepy stalker!Uhura decides to use this “opportunity” of her would-be BF’s planet’s destruction to get some action.  As in, “Oh, man, Vulcan’s destroyed?!  Finally!  Now it’s time to HIT THAT.  Hit that HARD.”

In the second scenario, Uhura and Spock are dating and have been at least since before the Enterprise left Earth, if not for far longer.  In this scenario, Uhura is not creepy but is incredibly oblivious.  Because if Uhura is in a romantic relationship with Spock, she should definitely know that the very last thing he would want at this delicate moment would be to give into his debased human emotions and bone her.  She should also be aware that he would not really be in a position to bone her until his pon farr period, assuming pon farr exists in the J.J. Abrams alternate continuity.

Those are really the only two plausible readings of this scene I can come up with.  Either Uhura is a sick stalker with a crush, or Uhura is the Alpha Quadrant’s most oblivious (and dare I say ethnocentric) girlfriend.  I was happy to see, at least, that Spock had the wherewithal to say, “Dude, Uhura.  This is not the time.  Not the time.”  And although Uhura seemed upset and disappointed by his answer, at least she was respectful enough to realize that no means no, even in space.

…and Spock is not amused.