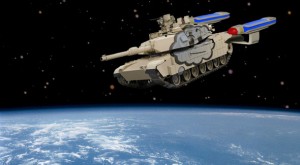 No, I’m not a elementary-aged child running around the playground while ODing on sugar packets and orange juice.  I’m just reminding myself of Star Trek’s wonderful sound effects from over the years.  We always remember Trek for its lovable characters, its often-hokey but always effective sets and special effects, and its idealistic vision of the future.

Today, though, we at Overthinking It’s Think Tank are going to focus on what really made Trek Trek: the zips, zaps, zoops, and that “Woo! Woo! Woo!” sound the ship always made when Kirk called for red alert. Who ever said space was silent?

Read them all and vote for your favorite at the end.

What’s the trouble with tribbles?  Contrary to popular belief, it’s not that they are constantly birthing new baby tribbles and eating your quadro-triticale hybrid grain.  The trouble is that, like many aliens on the original series, they look pretty fake.  Look at it.  Does this look like anything more than an oversized pom pom?  How could Uhura possibly be won over by such an obviously fake creatu—

Oh my god it’s so cute.  Would you listen to that purr?  Don’t you just want it to snuggle up against you and coo you to sleep?  Its almost as if its trilling has a tranquilizing effect on my human nervous system…

Oh.  Sorry.  I dozed off there for a second.  Thinking about tribbles and their adorable, adorable purrs.  The purr’s not enough for you?  Then consider the Tribble’s ultimate weapon: the anti-Klingon squeal. Behold.

So let’s review.  The tribbles’ purrs and squeaks

a)    got Uhura to buy a tribble in the first place, leading to the Enterprise’s doom,

b)    reduced the ever-logical Spock to a puddle of tribbly wuv, and

c)    uncovered an evil plot by a dastardly, disguised Klingon.

Man, what can’t tribbles do?  Other than use effective birth control, of course.