In honor of the release of the new Star Trek reboot, I decided to come back to a question that’s plagued my mind since I started watching Deep Space Nine so many years ago.  In the very first episode of DS9, the Federation moves into Terok Nor, a space-station located above the planet of Bajor, which has just been freed from a decades-long occupation by the Cardassians.  If your knowledge of Star Trek isn’t as deep as you’d like it to be, here’s an image to help you out: 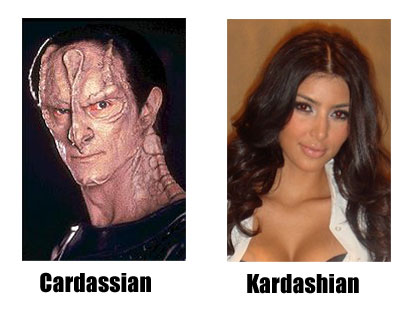 Cardassians are snake-like in every sense of the word.  They are manipulative, with metaphorical “forked-tongues.”  They have scaly skin.  They like the dark and love moisture.  One of their favorite pastimes involves sitting on piping hot rocks, possibly to raise their body temperature.

Clearly, it takes no stretch of the imagination to believe that Cardassians are humanoids evolved from lizards rather than apes.  But that begs the following questions.  If Cardassians are lizards, then why do their women have mammalian breasts?  And, perhaps more importantly, do Cardassians have nipples, and, if so, why?

The evidence and some answers below the jump…

[Sidenote of possible interest: Before we get to the answers to these burning questions, I should probably explain why I wondered about Cardassian physiology in the first place.  Unfortunately, due to issues of national security, I cannot reveal the answer to that question in its entirety.  What I can say, however, is that the answer to that question includes the words “Garak,” “Bashir,” and “fan-fiction.”  You may fill in the blanks at your own discretion.] 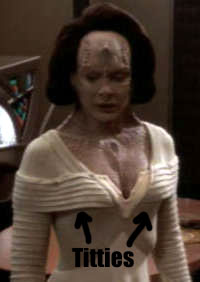 Over the years, human creationists have sometimes argued that humans could not have possibly evolved from monkeys because humans and monkeys do not look alike.  (This argument, of course, ignores the fact that we do.)  This argument breaks down when we examine the fossil record and genetic similarities between ourselves and other members of the primate family.

I don’t have Cardassian DNA mapped out just yet, but we do know from episode 6.20 of Star Trek: The Next Generation (“The Chase”) that humans and Cardassians likely share a genetic ancestor.  These ancient Progenitors (also known as “ancient humanoids”) spread their DNA across the galaxy, hoping it would somehow catch on and populate the Milky Way with creatures like themselves, only different.

Here’s the important part.  I don’t have an image of these Progenitors handy, but if you scan through the episode below to around minute 40, you’ll see that the one in the episode has obvious knockers.  Bazongas.  Hooters.  Bewbs.  Evidently, these ancient humanoids were mammals.  And, therefore, their genetic material allowed hundreds, if not thousands, of boobed species to spawn all over the Alpha quadrant, and beyond.

Actually, in all fairness maybe I shouldn’t be saying “boobed species” at all.  Maybe the humanoids in the Milky Way aren’t different species at all.  After all, Vulcan Sarek and human Amanda mated to create half-Vulcan half-human Spock.  Klingon Worf boned Special Emissary K’Ehleyr,  a Klingon/human half-breed, to make Alexander, a 3/4s Klingon who suffered from some daddy issues.  Likewise, Cardassian Gul Dukat had relations with a Bajoran female to breed 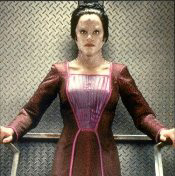 Scientists believe Ziyal may have nipples.

half-Cardassian half-Bajoran Ziyal.  It may be right to assume, therefore, that Cardassians and humans are two branches of one galaxy-wide uber-species.  An uber-species, by the way, that’s full of nipples.

Let us assume, then, that Cardassians are evolved from a mammalian species and therefore have nipples of some sort.  Are those nipples like our human ones?  Cultural evidence points to no.  Cardassians who are sexual interested in females do not pay much attention to their breasts.  Rather, neck ridges are all the rage.  Apparently, they make up an imporant erogenous zone to the Cardassian female.

Just because Cardassians pay more attention to neck ridges than breasts, it does not mean that breasts have no sexual or nursing function.  But it does add another suggestion that breasts serve only a vestigial function to the Cardassian race and have fallen out of use.  I spoke to alien mammary expert, Adriana Vallejo, who agreed with my hypothesis.  According to Vallejo, it was likely that Cardassians developed breasts and nipples due to the influence of the ancient humanoid DNA but that the Cardassians eventually lost nipple functionality as they grew more and more lizard-like due to the environmental pressures of Cardassia Prime.

Alas, we may never know for sure if Cardassians have nipples.  Perhaps a staff writer of a future iteration of Star Trek will have the guts to ask the question, and perhaps a Cardassian actor will have the guts to strip and answer it.  Until then, Trek fans will just have to wait and comfort themselves with the knowledge of the answer to another classic Trek question: “Do Trill spots go all the way down?”  By the way, the answer is yes.  Yes, they do.

6 Comments on “Overthinking Star Trek: Do Cardassians Have Nipples?”