[This is the first article by John Perich as a newly minted staff writer on Overthinking It (a fact we mentioned on the podcast a couple weeks ago, but didn’t put in writing until now. Welcome, John—great to have you! —Ed.]

Two popular films released in the fall of 1999 contained minor subplots in which the protagonist blackmails his boss as a key to wealth and independence. These two films, Fight Club and American Beauty, live on opposite ends of White Male Angst Road. The former’s about nihilistic thirty-somethings, coming to grips with the fear that none of it really matters. The latter’s about depressed forty-somethings, liberating themselves with the joyful realization that none of it really matters.

But enough about their themes. Today we focus on two scenes in particular.

“… A Life That Doesn’t So Closely Resemble Hell.”

This scene only works for an audience that takes as read that a corporate environment is shifty, soulless and untrustworthy. Which of course it is, but Western Civilization hinges on all of us waking up at 6:45 every morning and pretending it’s not. Warn us if you intend to drop that charade, okay Mendes?

Compared to the prior one, this scene works phenomenally well, because:

One Year of Severance

Now that we’ve picked apart the differences – in artful presentation and in thematic resonance – let’s take a look at their similarities. In both of these scenes, our hero blackmails his boss in exchange for at least a year’s worth of salary, plus some sweet benefits on the side.

Both of these movies resonated with significant swaths of American culture: Fight Club with disaffected Gen Xers and American Beauty with Academy Award voters. Clearly, the idea of Blackmailing Your Boss struck a chord. But which chord, and why?

Would This Really Work?

First off, while your correspondent is no lawyer, we have our doubts on whether you could hope for any pay-off, much less avoid a stapler to the skull, by blackmailing your boss.

Corporations beyond a certain size protect their business practices with non-disclosure agreements, non-compete forms and varying levels of password access. They defend themselves with a phalanx of lawyers, who can bankrupt a snitch with legal fees before he even sets foot in a courtroom. And, failing all this, there’s always extra-legal harassment: the hired thug or dirty-tricks squad to throw bricks at your windows and slash your tires.

Don’t take our word for it. Jeffrey Wigand (a/k/a Russell Crowe in The Informer) allegedly received death threats from tobacco companies. Many still think that Karen Silkwood, whistleblower at the Kerr-McGee Nuclear Power Plant, was killed on her way to meet with the New York Times. And there’s a long and honored list of federal whistleblowers who’ve had the government fall on them hard.

Do you think that any of those people would have got off easier if they’d asked for money instead? Or, when their bosses realized they were dealing with a chiseler rather than a crusader, they would have sighed with relief and called Fat Tony for a quick hit-job.

We feel safe in saying that blackmailing your boss wouldn’t work in real life. But audiences still bought it. To see why, we need to place these films in context.

1999 nestles comfortably in the upward slope of the dot-com bubble, a period marked by tremendous upswing in the Dow and NASDAQ. While speculative start-ups saw the wildest surge of profits, the rising tide lifted all boats. Everyone got wealthier, at least on paper. 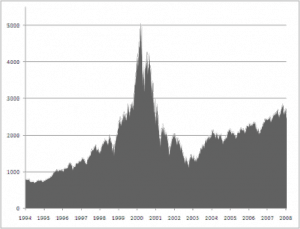 Add to this the “peace dividend” of eight years of the Clinton Administration. The U.S.’s overseas adventures had been limited to minor mishaps in Haiti, Somalia and Bosnia. Defense spending as a percent of GDP was at its lowest in 50 years, adding to American wealth and prosperity. Our generation (as Fight Club also noted) had no Great War.

So we were wealthier than ever. Why the angst?

Warren Buffett publicly expressed skepticism in tech start-ups as early as 1999. Robert Shiller started work on his prophetic book, Irrational Exuberance, around this time – and the book takes its title from a comment Alan Greenspan made in 1996. Barron’s, Forbes and the WSJ regularly published editorials speculating as to how long the ride might go on.

We knew the rising tide couldn’t last forever. We just hoped it would last long enough.

What No One Else Will Say

The protagonists of both Fight Club and American Beauty get a payday by threatening to expose their companies as frauds. That message resonated with audiences in 1999 because viewers had the sneaking suspicion that their companies were frauds, as well. We knew, even then, that the jury-rigged network propping up Pets.com, Kibu and Flooz couldn’t stand a good shake. Someone just needed to say the right thing at the right time to bring it all tumbling down. Kevin Spacey and Edward Norton threatened to say that thing and got hand trucks full of hush money as a result.

You can only blackmail someone if you’re holding a secret over their heads. American Beauty and Fight Club were the voice of a generation, speaking to the secret in all our lives.

4 Comments on “Blackmailing Your Boss: The Key to Wealth and Power”