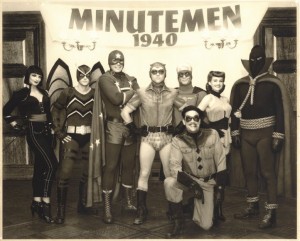 What are we, the people, supposed to make of these wildly divergent reviews?  How will we know if Watchmen is worth seeing or not?

The Overthinking It readers look up and shout  ‘Help us, Mlawski!’

And I look down and whisper, ‘Okay.’

This Internet is afraid of me.  I’ve seen its true face.

The Judges of All the Earth

An examination of The Hollywood Reporter’s review puts the main issues of reviewing such a film into stark relief.  You can read the full review here, but if you don’t have the time, here are the most telling quotations:

Snyder and writers David Hayter and Alex Tse never find a reason for those unfamiliar with the graphic novel to care about any of this nonsense. And it is nonsense. When one superhero has to take a Zen break, he does so on Mars. Of course he does.

It’s all very complicated but not impenetrable. We pick up the relationships quickly enough, but soon realize these back stories owe more to soap operas than to superhero comics.  The thing is, these aren’t so much superheroes as ordinary human beings with, let us say, comic-book martial arts prowess.

The point is that these superheroes, before Nixon banned them, were more vigilantes than real heroes, so the question the movie poses is, ah-hah, who is watching these Watchmen? They don’t seem too much different from the villains.  Which also means we don’t empathize with any of these creatures. And what’s with the silly Halloween getups? Did anyone ever buy those Hollywood Boulevard costumes?

The reviewer, Mr. Kirk Honeycutt, goes on to say that Watchmen will probably be the first massive flop of the year.

Let’s break down these quotations.  Those of you who have read Watchmen as a comic will probably notice that, though Mr. Honeycutt blames the director and screenwriters for what he sees as the film’s flaws, these “flaws” all come from the original text.  It wasn’t David Hayter and Alex Tse who decided that Dr. Manhattan would have a sanctum on Mars.  It was Alan Moore, the writer of the comic.  Alan Moore decided that Dr. Manhattan would be the only superhero with actual super powers, and it was Alan Moore, quoting the satirical poet Juvenal, who wondered who was watching them all.

But the really interesting thing to me is that Mr. Honeycutt seems to be arguing against Watchmen for the same reasons many comics aficionados tout it as one of the great masterpieces of the form.  Yes, Watchmen’s main characters are just ordinary human beings who have soap opera problems and who get off on wearing silly superhero costumes.  And.  That’s.  The.  Point. 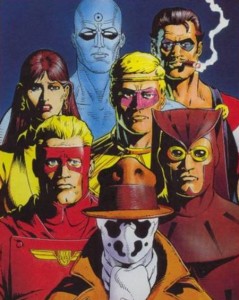 Mr. Honeycutt goes on to say, “Watchmen enters into a realm that is both nihilistic and campy. The two make odd companions.”  Not really when you remember that Alan Moore was trying to deconstruct the golden and silver age superhero comics, which were, well, campy.  Thus the silly costumes.  Plus, isn’t that what a lot of post-modern/deconstructionist lit like?  Both silly and nihilistic?  Those two tones don’t work together well?  What about in Catch-22, Slaughterhouse-Five, and Dr. Strangelove?  At some level, isn’t that what postmodern lit is?

It just seems like Mr. Honeycut is not rating the movie but the book.  And missing the point of the book.  I hate to mock*, but after reading this review, I wondered what Mr. Honeycutt’s future reviews would look like…

This movie doesn’t seem to be much of a movie at all.  It has no real plot but rather seems to be an overly long chronicle.  The film jumps from character to character, giving viewers no real time to latch onto any one of them as the main protagonist.  What’s more, the film enters into a realm that is simultaneously realistic and fantastic.  The two make odd companions.

The Hollywood Reporter’s Review of Hamlet (The 50th film adaptation)

Like many people, I went into Hamlet with high hopes.  The trailers promised a rollicking tale of revenge with all the fun that entails.  Instead, what do we get but a four-hour-long bitchfest in which the main character hems and haws and goes crazy for no apparent reason?  And there’s a ghost?!  WTF.  Where did that come from?  Probably going to be the biggest flop of all time.

The Hollywood Reporter’s Review of Maus (The Animated Film)

I haven’t read the Pulitzer-winning graphic novel, but if this is what’s winning Pulitzers lately, leave me out.  The film is like, ah-ha!, Nazis are like cats and Jews are like mice.  Which means that something that could have been subtle turns out to be sledgehammer to the head.  Animating the film rather than using live actors could have been a great idea if, say, Pixar had been on board.  But in this film, the characters all look like hastily-scratched pen drawings my five-year-old daughter could have drawn. 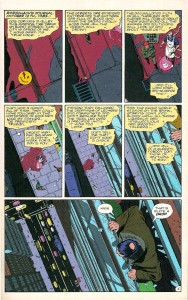 Look Upon Which Works, Ye Mighty?

No, no.  I’m being unnecessarily cruel to Mr. Honeycutt.  The fact is, I read his review as someone who believes Watchmen the comic to be a work of genius.  A review of the film that highlights not the flaws of the film adaptation but the perceived flaws of the original text, therefore, is just not something I can take too seriously.

But that leads me to wonder: should film reviewers be expected to have read original texts of adapted works?

The answer, I think, has to be no.  First, film reviewers are just that: FILM reviewers.  While they might have the expertise to judge a movie on its merits, they might not have the knowledge of, say, comics history or theory, to properly judge a comic.  Second, time constraints obviously restrict the amount of reading a critic can do.  Let us assume that something like a third to a half of all films nowadays are based on other texts.  That’s a lot of reading to do.

Third, reviewers aren’t only reviewing for those of us who have read the original text.  They are reviewing for the benefit of everyone, including those people who have never even heard of the original.  My dad, who is somewhat interested in seeing the Watchmen film, doesn’t care if the movie is as good as the book.  He hasn’t read the book.  He wants to know if the film is worth seeing–period.

On the other hand, I can’t help but write off Mr. Honeycutt’s review as, well, silly.  There is a consensus among those who have read Watchmen that it is a legitimately fine work of art.  Not that I’m a big fan of Top 100 lists, but Time Magazine called it one of the top 100 novels of all time.  Entertainment Weekly put it as #13 in its list of top novels of the past 25 years.  It won the Hugo Award.  To denigrate the film adaptation for the same things that made the original so well-loved shows that either you A) have very different tastes than the general public or B) you’ve missed the point.

And it’s fine to have different tastes.  It’s important, even.  We don’t want everyone to agree that a work of art is genius just because everyone else says so.  Hey, in my time I’ve bashed The Catcher in the Rye, Moby Dick, the collected works of Ernest Hemingway, the collected works of Toni Morrison, and Ulysses and Finnegan’s Wake.  I think Citizen Kane, The Graduate, and Gone With the Wind are overrated.  I loathe Lost in Translation.

But that doesn’t mean that if I write a review of one of the aforementioned works that anyone has to listen to me.

That’s doubly true if I’ve missed the point of the original text.  If I start a review of a William Faulkner novel saying, “His sentences are far too long, and it’s almost as if he’s just writing down every little thing that pops into each character’s head at any given time,” that is your cue to ignore my review.  If I write, “Animal Farm is an adorable film for children who love talking animals,” you should probably ignore my review.

Then again, I’m not sure if Mr. Honeycutt is missing the point of Watchmen or not.  At first glance, it seems he is.  At second glance, though, maybe he isn’t.  Or maybe we shouldn’t blame him for missing it.  It’s possible that Watchmen only made sense back in the 80s when superhero films and comics WERE still cheesy and campy.  Perhaps Watchmen was only considered genius because it was the first of its kind.  Now that we have The Dark Knight, Iron Man, and other dark superhero films around, Watchmen just doesn’t seem to be breaking any new ground.  You can’t deconstruct a genre if that genre no longer exists in the minds of the viewers.  In other words, if a tweeny-bopper kid goes to see Watchmen, having never seen or read a piece of old-school, campy superhero lit, does the deconstruction work?  Probably not.  Then it’s just another dark superhero action flick in a sea of dark superhero action flicks.  And if that’s the case, Watchmen the comic did too good a job of deconstructing the superhero genre.  Alan Moore may have deconstructed it so bad it doesn’t even exist in the same way anymore.  Which makes Watchmen unnecessary.

22 Comments on “Who Reviews the Reviewers?: Early Critical Response to Watchmen”