Slumdog Millionaire seems to be heading for a big Oscar night, so we thought we’d take a closer look at the prize at stake in the movie.

Without giving away too much, I can say that the protagonist is a contestant on the Indian version of the game show “Who Wants to Be a Millionaire,” where the grand prize is a whopping 20 million rupees. That’s a lot of cash, right?

(Warning: Slumdog Millionaire “spoiler” to follow, as if the outcome of this movie were ever in doubt.)

But America is a much wealthier nation than India. So how do the game show grand prizes compare to the average incomes of each country? Not surprisingly, the Indian prize is worth far more to a typical Indian than the American prize is to an American: 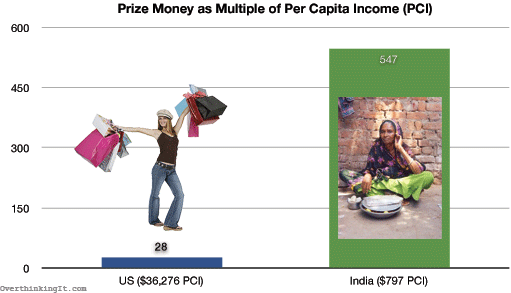 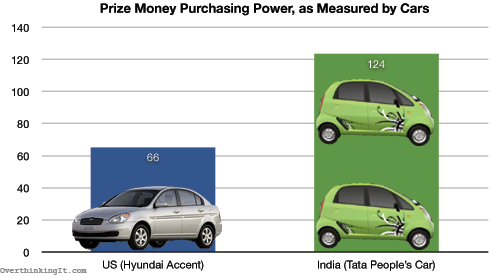 But say he chose to invest his winning in the Indian stock market instead of blowing it all on consumer goods. How would he have fared compared to an American stock investor?

Since the middle of 2006, both indexes have lost significant value off of their peaks in late 2007/early 2008, but the Bombay Stock Exchange has fared better than the Dow as of this writing.

It seems no matter which way you cut it, the Slumdog gets the better end of the deal, even though his prize is smaller than the American equivalent in absolute terms. But this is all speculation. We have no way of knowing if Jamal lives a life free of financial worry, or if he blows his fortune on bad stocks and Tata cars. Unless… 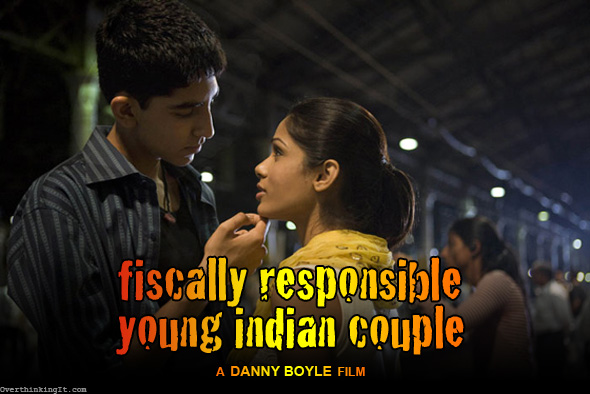 10 Comments on “Slumdog Millionaire: How Much is 20 Million Rupees, Anyway?”