Okay, just finished the new episode of The Office, and I want to take a stab at calling the season finale, three months from now. I will most likely be wrong. But I want to get this down in digital ink, just in case I’m not. (Office spoilers to follow, obviously.) 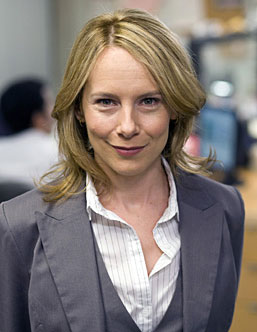 In this episode, Michael goes up to Nashua to get closure with Holly, his soulmate who was transferred out of Scranton at the very beginning of the season. She’s away at an HR retreat, but he finds out she’s dating a salesman up there. Devastated, he wanders over to her empty cubicle to steal a sleeve of her sweater, and notices a document on her computer desktop called “Dear Michael.” He quickly puts it on his USB thumb drive. At a diner later, he confesses to Pam, who forbids him from looking at the letter… but offers to look for him. She reads it and deletes it, and tells him Holly still has feelings for him.

So here’s my fairly-obvious prediction: Pam was lying. It’s just too convoluted a setup for Pam not to be lying. The letter was addressed to another Michael entirely. Michael Bolton, I’m guessing. But Pam felt sorry for the guy and told him what he wanted to hear. I was actually surprised that didn’t come out in her confessional at the end of the episode, but I bet it’s still coming, down the road.

And here’s my less-obvious prediction. The season finale will be a company picnic, in which all the branches are invited down to Scranton. This will include Holly. Michael will be convinced she secretly loves him. Pam knows she doesn’t, and will desperately try to keep him from doing anything stupid. But of course, he’ll do something very stupid, like grab a microphone and propose in song. When she rejects him, he’ll reveal that he read the love letter, and she’ll tell him the letter wasn’t about him (and that she hates him forever for spying on her). Humiliated and furious, Michael will fire Pam for lying to him. This will leave Jim in an awkward position – does he quit to support his fiancee, or does he stay on the job because he really needs the money to pay that expensive new mortgage? And knowing The Office, we won’t learn what he decides until September.

Anyway, like I said, probably wrong. But it feels plausible, doesn’t it?

(UNRELATED OFFICE COMMENT: Does anyone else feel that the whole yearlong Dwight-Angela-Andy saga ended with a whimper? They had that duel in the parking lot, which was great. But ever since, it’s like it never happened. C’mon, they couldn’t write an episode where Andy takes a week of vacation to get over the end of his engagement, and comes back engaged to a Hooters waitress or something? Like Michael said, I feel like I never got closure.)

11 Comments on “A longshot prediction for “The Office””