[A guest post today from John Perich. Let us know what you think in the comments! –Ed.]

Where can I get me some epistemology like that?

Dualism–the theory that mind and body are two distinct entities which interact with each other–has poisoned human behavior over the last thousand years or so. From dualism, we get the notion that the pleasures of the mind are “noble” while the pleasures of the flesh are “sinful.” We see the separation between inhumane logic and passionate emotion, never imagining that they spring from the same source. It’s taken scientists and philosophers centuries to beat back this curtain of ignorance; progress has been slow.

And then Rick Springfield’s “Jessie’s Girl” comes along and undoes all the good work.

Rock ballads and pop songs have always carried dualism’s banner. Consider the threadbare cliche of “my heart says yes but my mind says no,” the notion that there are two warring entities within the human skeleton, a Soul and a Body, each trying to pull the body a different way. Of course, we can reconcile this trope with more modern notions of perception (e.g., Daniel Dennett’s multiple drafts theory of consciousness) without much difficulty.

“Jessie’s Girl,” however, plants its flag squarely on the turf of the ignorant. Observe: “And she’s watchin’ him with those eyes / And she’s lovin’ him with that body, I just know it.”

Nowhere is the distinction between Soul and Body more explicit. She (Jessie’s Girl) is using a tool (her body) to perform an action (lovin’). She makes a decision (to watch) and selects an implement (those eyes). The redundancy makes Springfield’s pre-rationalism bias explicit: what else would you watch with, if not eyes? Or love with, if not the body? 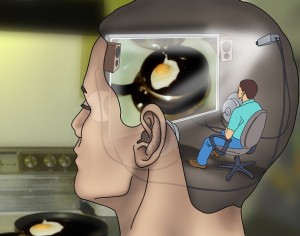 But Springfield calls attention to the dichotomy. The girl manipulates an object, like some Cartesian homunculus, to achieve a desired end. She’s not lovin’ him; she’s using her body on him.

If you don’t get how pernicious those lyrics are, consider a similar sentence: “I’m going to use my feet to get to the refrigerator, then use my hands to open it and get a beer. You want one?”

That’s just stupid. If you said, “I’m going to get a beer from the fridge,” everyone would know what you meant. There’s no need to spell out the body parts that you’ll be using to get the job done – unless you consider the Body somehow separate from the Mind.

It gets worse: “And I’m lookin’ in the mirror all the time / Wonderin’ what she don’t see in me.”

Subtler, but even more wicked! The homunculus piloting Rick Springfield cannot conceive of itself without mechanical aid. It uses its eyes, and the light reflected off a mirror, to evaluate itself in the eyes of Jessie’s girl…whom it thinks he wishes he had!

Or, to complicate matters further, is he saying that Springfield’s Soul wishes that Springfield’s Body had Jessie’s girl–that she would use her own Body on him for some lovin’? Is the love shared between man, woman, and Jessie in the 80s a spiritual connection or a purely physical act? Or maybe we should abolish that distinction, like thinking adults, and recognize that the mind/body dichotomy muddles more than it explains, love is a complicated mix of chemistry and idealization, etc, etc.

Please note that The Cars’ “My Best Friend’s Girl” covers similar ground without any theosophical problems, and is therefore a superior song.

Email John at perich at gmail.com.