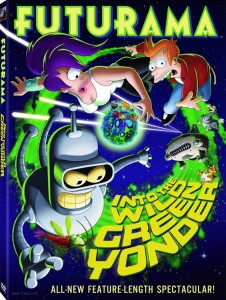 I was lucky enough to join Mr. Wrather at the sneak preview screening of Futurama: Into the Wild Green Yonder at this year’s NYC Comiccon.  I found the plot somewhat hard to follow (although, possibly, that was part of the point), and the first third, which involves Bender dating the Robot Mafia Don’s girl, was completely irrelevant to the rest of the film.  Each individual bit, however, was pretty funny–much funnier than the first two Futurama movies, in my opinion.  Overall, though, I still found it inferior to any old Futurama episode running on Comedy Central.

But OTI isn’t a reviewing site; it’s an Overthinking site.  And Overthink I shall.  But I’ll do it below the fold so you can avoid tainting your brain with the spoilers I must reveal.  If you’ve seen the movie or don’t mind being spoiled, read on, Macduff.

At the beginning of this fourth Futurama movie, a group of Ecofeminists are trying to stop Amy Wong’s father from destroying the environment to construct the Universe’s largest and most wasteful golf course.  These Ecofeminists are the kind we’ve all seen before in TV-Land.  They’re:

These are the Ecofeminists who replace “history” with “herstory” and “manuscript” with “womanuscript.”  They love protecting every part of the environment, including vicious (wo)man-eating leeches that are so dangerous they can eat through cement walls.  Rather than talk in normal voices, these Ecofeminists prefer screaming chants through bullhorns.  Of course, no one wants to listen to them.

The moral of the story, in the first half of the film, then, seems to be, “MAN, are Ecofeminists annoying!”  And, hey, maybe they are.  Sure, the environmental activists and feminists I know are completely different from these buffoonish cartoon caricatures.  But, then again, maybe I don’t know enough environmentalists or feminists.  I’m only a young white middle-class female from New York, after all. 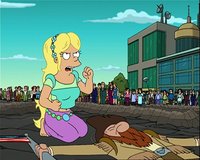 Damn hippie Ecofeminists! Curse you for being so right!

Here’s what happens in the second half of the film (assuming I understood the complicated plot correctly):

Okay.  Let’s try to break this down.  The first half of the movie seems to be hammering the point home that Ecofeminists are terrible, frustrating people who deserve to be mercilessly mocked.  Then, the second half of the film says:

If that’s the case and Into the Wild Green Yonder is espousing an Ecofeminist critique of modern America, then why all the Ecofeminist bashing in the first half of the film?  I suggest that the first half of the movie was an insurance policy against those who would claim the end of the film was too lefty.  “Too lefty?” the writers and producers could say. “But we mocked both sides equally!”  And it’s true.  The environmentalists in the movie, like the leech-loving Ecofeminists, come off as idiotic.  The anti-environmentalists come off as greedy pigs.  The feminists come off as overzealous and shrill.  The men come off as penis-obsessed chauvinists.  Equal opportunity satire, right?  Everyone sucks in his or her own way. 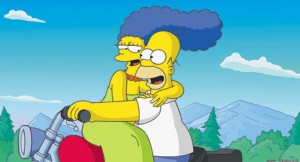 Saving the environment with smooches and motorcycles.

However, while The Simpsons movie and Into the Wild Green Yonder deal with the same issues and came down on the same radical Ecofeminist stance, I think The Simpsons pulls it off better.  That’s because Homer actually has to change throughout the movie and understand that he was wrong.  He learns that the only way to save the environment and his marriage is to realize the world doesn’t revolve around his own desires.

In Futurama, though, none of the characters really learn anything.  At the end of the film, the Ecofeminists are still annoying–in fact, their previous leader, Frida Waterfall is unceremoniously killed, thrown in a telephone booth, and stepped on to drive the point home.  Their mascot, the vicious man-eating leech, turns out to be the last Dark One, so extinction is the only answer for that species.  (In other words, “Save the Whales… Unless They Turn Out to Be Evil.”)  Fry saves the environment not because of any realistic reason but because a prophecy told him he has to.  Leela and Fry, Amy and Kif, and Hermes and LaBarbara reconcile not because any of them learned anything about the opposite sex, but because the movie is ending and everything needs to be tied up quickly.  Zapp Brannigan, we expect, will continue to be a chauvinist; Leo Wong will continue raping the environment.  How can an audience learn anything from a movie if its characters don’t even manage to learn?

Eh, I’m going to go watch Wall-E.  It’s not as funny as Futurama, but at least it knows where it stands.