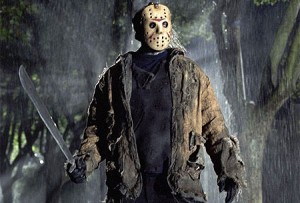 The middle child of Warner Brothers’ Comic-Con screening family was some footage for the upcoming remake of Friday the 13th. Honestly, I haven’t even seen the original, and I had next to zero interest in this film. After watching the preview footage, if it were possible to have a negative amount of interest in it, I certainly do. Wrather and I were subject to about 6 minutes of incredibly graphic violence, including a bear trap around the leg (with a lot of raw flesh), a woman burning inside a sleeping bag, machetes through the leg, machetes through the head, and other things that I missed because I literally couldn’t watch.

Now, just to be clear, I do watch horror movies every once in a while, but usually the campy variety (Shaun of the Dead, Army of Darkness, etc.) I have not seen any of the Saw movies, and I have absolutely no intention to. Call me squeamish, but this level of violence and gore has no appeal to me, and I struggle to see how it appeals to others. To Each His/Her Own, I guess, but this stuff was just brutal by any definition of the word.

There was one notable moment in the Q&A: someone basically asked why we need yet another movie where Jason kills a bunch of teenagers in the woods. In other words, he thought this was a stupid remake that no one needed. The filmmakers’ response was essentially: no one is saying we “need” this; we’re doing it because we want to. Some portion of the audience loudly cheered this response, but I have the feeling that the majority of the audience was of the former opinion.

Other writers/readers: are you excited about this, or other ultra-violent horror movies coming up? I won’t judge you. I just won’t go with you to see it.