[Part 2 of the latest Think Tank today. Check out Part 1 if you haven’t yet, and vote for your favorite at the bottom before Midnight EST on Monday. —Ed.]

The board game “Clue” was originally “Cluedo,” and much like Right Said Fred, bicameral legislature and Smallpox, it’s a wonderment that first made its way to the Americas from Britain.  For this – as perhaps for little else – we all owe them a debt of gratitude. 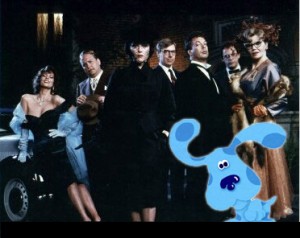 Inexplicably, the sequel was eventually reworked into a children's show.

Now, Clue is not a particularly complex game: while it lacks the fast-paced, fevered pitch of Chess, the wry cultural commentary of Candyland, or the strategic and intellectual depth of Crossfire, I’d argue that these apparent deficits essentially serve to bolster it’s major strength.  Clue is a really the austere framework for a compelling story line, a piece of real drama which is implied, but not elaborated upon except in the players’ minds.  After all, we’re talking about the only children’s board game (or at the very least, I suspect, the first) that STARTS with a high-society murder and the decision to turn vigilante.  Once the players steel themselves to their grim fates, and take in the decaying squalor of the antiquated mansion that sets the stage for this Poirot-style morality play, what follows are essentially repetitions of the scientific method.

HYPOTHESIS: I believe it was Colonel Mustard who did it, in the Conservatory, with the revolver.

PREDICTION: American eight year olds have no idea that Mustard is a color, or what the heck a revolver is.  Ditto for a Conservatory.

TEST OF HYPOTHESIS: Proof by disproof, essentially.  Like science did with “God” about 160 years ago.

And the cycle spins on until people either solve the murder, or cheat and send an innocent man to prison.  It’s eerily more like real life than The Game of Life ever could be.  Most of my attempts to play this with my family (and there were MANY attempts) would ultimately become inadvertent lessons in theoretical logic, too, ala:

Which beckons a most important point.  Clue the board game is unquestionably the greatest of its ilk because it inspired Clue, the movie.

Fantastic in its own right, I’d argue that this is certainly the best movie ever adapted from a Parker Brothers work, and John Landis’ best effort at transposing a parlor game into cinematic form. Though Blues Brothers 2000 (an obvious extended metaphor for Yahtzee) is a good try, too.

I don’t think I ever played Mouse Trap. Oh, we had the game in its oversized box, and it came off the pile regularly when I was small. But playing, as in rolling dice, taking turns, and following rules? Never did it.

Mouse Trap was actually two games in one. The first, the real game, was an almost unbelievably fun Rube Goldberg contraption that involved turning a crank and setting a whole load of mayhem in motion, the ultimate aim being to “catch” another player’s piece beneath a falling net.

So when the oversized Mouse Trap box came off the pile, my brother and I were a blur, setting up the contraption and triggering it, then resetting each component (ball in the bucket; man on the diving board; net on top of the pole) and triggering it again.

The second game involved dice and turns and pieces and rules. (Apparently, you were meant to build the contraption slowly, each piece a reward for winning a round of the game.) It may have been a good game, it may have been a bad game. Who knows? What it was for sure was an irrelevant game, since it paled in comparison to the mayhem you could trigger with again and again, and the built-in drama (“Will it work this time?”) inherent in each turn of the crank.

I can’t help but think that Milton Bradley missed a big opportunity to build a better Mousetrap. Why not release LEGO-like sets of Rube Goldberg pieces, designed to fit together in some standard way? Mix and match your favorite contraptions into some giant machine, built to whatever nefarious purpose you wished? Something like this: 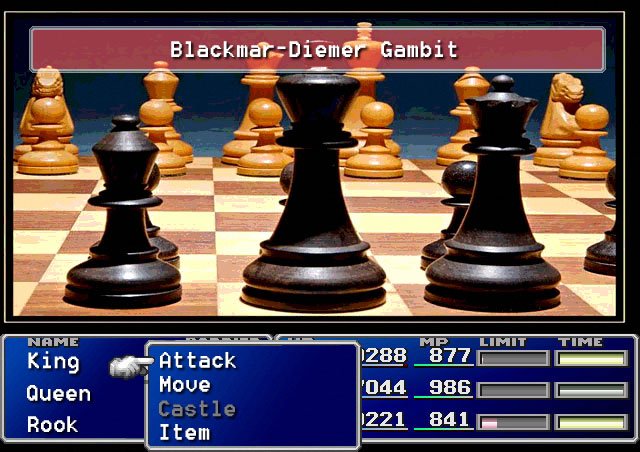 Sorry if I’m a little behind the times ’cause I’ve been playing so much Team Fortress 2, but I just started playing this awesome game called “Chess.”  It’s a tabletop game, so you know it’s old school.  You even have to buy a specific board and miniatures to play!  Cuteness!

Unlike most tabletop games, Chess requires that you play not one but SIXTEEN different characters.  So it’s more like a Final Fantasy game where you have one main character but you still control everyone else.  Although it sounds kind of complicated, Chess is turn-based, so you have plenty of time to think out your actions.  Unless you buy the Speed Chess expansion pack, though I wouldn’t recommend that for newbies.

A fun thing about Chess is that you control six unique character classes.  The classes are pretty balanced, too.  For instance, while the Knight can only move in a certain pattern, it has the Jump ability like Kain from Final Fantasy IV.  The battle Bishop (think Billy Lee Black from Xenogears) can only attack diagonally, but you can move him as many spaces as you want.  At first I thought the Pawn was totally nerfed, but then I realized you can use them to Zerg-rush your opponents.  The game designers really knew what they were doing with this one.

What about the story?  Well, at first glance, it’s pretty simplistic.  I mean, a bunch of legendary warriors coming together to save the king?  Bo-ring!  And it’s all very “black versus white,” if you know what I mean.

But  there’s something to love about its simplicity.  Within such a seemingly straightforward tale, there’s plenty of room for complex strategies, manipulation, and, of course, death.  It’s like the designers read Dune before they made the game!  Of course I mean that as the highest of compliments.

So go out and buy Chess today, and soon you’ll be the Chess Master!  (That’s like a PokéMaster for Chess, btw.)

What is the greatest board game of all time?