This is the first of what we hope will be a regular feature. In Think Tank, we’ll all join forces to tackle one question. To kick things off:

Which pop song has the best plot?

To be honest, I have no idea what this song’s “plot” is about, but I assume it must be the most epic and grandiose tale ever told in the New York metropolitan area. The cop’s not just a cop; he’s the “maximum lawman.” Gangs don’t just fight; they have an “opera out in the turnpike,” fight their ballet in the alley, and “flash guitars just like switchblades.” Which I assume means that they duel with totally sweet hybrid knife-guitars. All of this takes place against the backdrop of the “giant Exxon sign that brings this fair city light.” That sign must be HUGE. And it all comes to a tragic end when the protagonist’s “own dream cuts him down” in a hail of gunfire in the “tunnels uptown.”

Sure, the lyrics are all over the place, but I’m convinced a talented director/scriptwriter could cobble all of this imagery together to make a killer musical/movie set in a sweltering 1970’s New York summer. And the guitar-weapon hybrid possibilities are just irresistible:

I'm pretty sure this is what Springsteen had in mind. 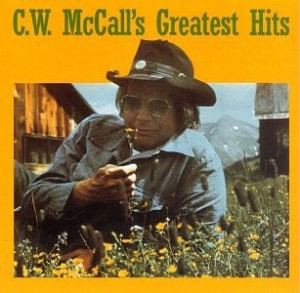 Yes, he's sniffing a flower. No, I don't know why.

The best stories create their own worlds – think about Tolkien’s Middle Earth, or Joyce’s Dublin. To those, add McCall’s American highways. We may not understand what he means when he says “cab over Pete with a reefer on” (it’s a refrigerated trailer pulled by a flat-faced Peterbilt truck), but for all the strangeness of his words, McCall’s message is clear: “Come on and join our Convoy, ain’t nothing gonna get in our way.” It’s a stirring anthem of working class solidarity that ranks right up there with Woodie Guthrie’s “This Land Is Your Land,” or Twisted Sister’s “We’re Not Gonna Take It.”

The song came out only a year after the National Maximum Speed Law made 55 miles per hour mandatory. The Smokeys weren’t just the enemy of the trucking subculture – everyone was picking up a C B radio. More importantly, in 1975 the country was still reeling from Vietnam and Watergate. Disgust towards the government was at an all-time high. In “Convoy,” the right to speed becomes symbolic of a return to an earlier era of freedom. There’s a direct line between “Give me liberty or give me death” and “So we crashed the gate doin’ ninety-eight, I sez, ‘Let them truckers roll, 10-4!'”

That’s the genius of the Convoy – it creates a fantasy of rebellion, of facing down the National Guard with your fellow citizens (only five years after Kent State!), but it also makes the fantasy harmless enough for mass consumption. It’s a grenade wrapped in bubblegum. No wonder it hit number one on the pop and country charts, and inspired a multi-million dollar film.

My fellow Overthinkers have picked some great songs. But do any of those other songs star Kris Kristofferson and Academy Award-winner Ernest Borgnine? ‘Nuf said. 10-4.

“Norwegian Wood,” The Beatles
from mlawski

The Beatles’ “Norwegian Wood (This Bird Has Flown)” is a simple song. Other than the words “Norwegian” and “anywhere,” there is no word longer than two syllables long. A small child could read and understand these lyrics.

So why can no one figure out what actually happens in the song?

As far as I can tell, it’s about a woman who invites a man (John Lennon, probably) to her apartment. There, one of four things happens:

After one of those four events happens, the woman goes off to work, and one of four things happens:

There may not be a way to figure out what actually happened during “Norwegian Wood,” and that’s precisely why it’s my pick for the greatest story ever sung.

“There was an Old Lady (Who Swallowed a Fly),” Mills and Bonne (most famously recorded by Burl Ives)
from shechner

If you’ve heard of this song before today, it was most likely when you were about six years old, as it is purportedly (and inexplicably) intended for children. Specifically, it’s one of those cumulative types where the verses tell a continuous narrative, each reiterating its predecessors after extending the plot. As a refresher, here’s a video of a pleasingly plump, bespectacled, be-ten-gallon-hat-icled man singing it beside a campfire:

I remain unconvinced that it’s a campfire and not a funeral pyre.

Now, while my colleagues are likely discussing more epic matters – quixotic love, the struggle of the lower class long-haul trucker, the decay of the urban soul – I propose that I’ve never heard a story in song (maybe even a story at all!) that matches the sheer unsettling terror that this song induces in me: “Oh, so you’ve written a story about how the lower class rose up to fight oppression? Awesome; I once watched an elderly woman systematically consume a live ecosystem that remained alive in her gut. You’ve got a fantastical re-imagining of World War One, set in a magical world of Hobbits and Elves? That’s cool, I guess; this woman I know ate a LIVE FRIGGIN DOG AND CAT, and NONE INVOLVED DIED.” 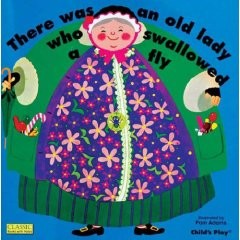 And to top it all off, she's SMILING.

There are so many things wrong about this piece.  I find it unsettling in much the way that the old “Twilight Zones” are: that so much horror can be found in the seemingly mundane, just by twisting minor elements around. After all, it’s subject matter is just some woman the singer knows – no one special – it could be just any old woman.  Really, who IS this person, and how has she developed the skill to consume other life – less like you or I eat it – and more as Chronos devours his living God-Children?  Why does no one else stop her from committing these monstrous, almost certainly suicidal acts?  Yes, that’s really the crux of it, I guess.  This is a song that ends each verse with the unbelievably passive, “Perhaps she’ll die,” ultimately culminating with the so-called ‘punch line,’ “She’s dead, of course.”  It’s a song about watching something fantastic and horrifying, and walking away from the experience with nothing but ennui.

In summary, having heard this song for better than 25 years, as far as I can tell its purpose is three-fold:

And really, it’s number three that led me to put it on the list.

More Overthinkers weigh in tomorrow. But feel free to suggest your own greatest story ever sung in the comments, today.

17 Comments on “The Greatest Stories Ever Sung, Part 1 [Think Tank]”