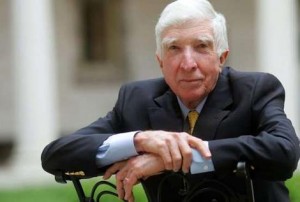 John Updike passed away yesterday, leaving a huge gap in the literary genre known as the “grocery store short story.” As far as I know, his “A&P” is the only memorable short story set within the confines of a supermarket. Twain could have had a lost chapter in “Huck Finn” where Piggly Wiggly crops up at an important plot point, but Updike reigns supreme in the depiction of just how much it sucks to work at a food-dispensing hellhole.

For a long time, I blamed Mr. Updike for my decision to enter that seedy world of climate-controlled milk shelves and artificially-colored fruit displays. On the surface, my crippling student loan debt and the fact that my grandpa could help me get the job with a minimum of ass-kissing the boss on my behalf were more important reasons to seek employment with a certain grocery chain located primarily in the Southeast (Winn-Dixie). But I’m a voracious reader, and Mr. Updike’s story went a long way towards selling me on the notion that I could be a stud in the bagboy corps of my local store.

Let me take you back to a more innocent time, a more refined time, a time in history when nothing seemed like it would ever change from the peace and prosperity of the recent past: the summer of 1998, particularly memorable for me because of two factors.

I spent a miserable summer babysitting my two younger siblings (and by “babysitting” I mean sitting in front of the TV on the top floor of my mom’s apartment while my brother and sister fought over the TV downstairs), and by August I was looking on as other people went back to school, while I sat around building up a tolerance to Doritos by eating bag after bag. I needed a way out of this rut, because I was well on my way towards becoming one of those morbidly obese freaks you see on TV, the ones who have to be lifted out of their bed via construction equipment.

So I went back to my personal library and found “A&P,” Mr. Updike’s short story about lust in the grocery store. For anyone who hasn’t read it, the basic plot is this: young guy is working a shift at the store during the middle of summer when three girls in bikinis walk in. Two of them are fugly (well, one is; I think the youngest one is just a kid), but one of them is gorgeous. The manager gets mad and kicks her and her friends out. Young guy (who has been more than happy to stare at them while they strut around the store) decides to quit in protest and to show support for the girls (particularly the one he wants to get with). When he’s done and he walks out the door, the girls are nowhere to be seen. They’ve moved on, back to the pool from where they came, and he’s left out of work and out of luck in getting any that day.

When I thought back to this story, the part that sold me on the idea of working at a grocery store (ladies in bikinis in the midst of a summer heat wave) stuck out more than the part of the story that should’ve warned me (actually working in a grocery store, with all the bullshit you get from managers and the expectations that you have to make sure people don’t die because you left some yogurt on the shelf seven months after it expired). And so, in August of 1998 I became an enthusiastic employee of the Winn-Dixie corporation. One day later, my enthusiasm was gone, but I was stuck by the fact that I had loans to pay back. For the next nine years (including a jump across the street to another store when the local Winn-Dixie was one of many victims of company-wide downsizing), I was a grocery store fixture, as permanent as the generic cheese that no one ever bought.

But a funny thing happened during the near-decade I spent toiling in the trenches: I found a story to write, about myself and my co-workers. The work might have sucked, but the people (well, most of them) were worth the hassle. I got to know all different kinds of white people (ethnic diversity not being a priority at either stores that I worked at), and my eyes were opened to the fact that:

Oh, and the promise of attractive girls always coming in the store in bikinis? That happened, to be sure, but my track record with the ladies wasn’t what I would’ve liked. Nonetheless, being there did force me to actually talk to girls on a regular basis (a skill which will come in handy long after I forget how to rotate milk stock or which Hot Pocket flavors to avoid). And I got motivation to get off my ass and back into college, as well as my own possible attempt to capture the grocery-store experience as a sort of “Catch-22”-esque madhouse. As I write this, I’m working in fits and starts on a very rough draft which I hope to translate into something more polished over the next few months or years (no pressure to finish it, huh?). And all of this (well, a good chunk of it) is because Mr. Updike filled my head with notions of girls in bikinis at all hours of the day coming through the sliding doors.

So in memorial to you, John Updike, I and my fellow former bagboys hold our hands over our hearts in our teal-and-white smocks as we refrain briefly from trying to sneak a glance at the breasts of our favorite cashiers. You understood why we do what we do (to get laid). If only we’d paid attention to that part where your narrator fails to do so, we might never have embarked on this road. But I know I’d be a lesser man if I hadn’t.