Warning: Spoilers for Wall Street and Kill Bill within. 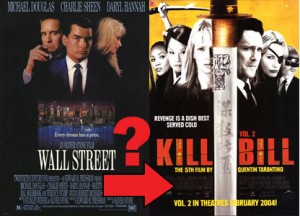 From the “too long to Twitter but too dumb to be an OTI feature” files comes this interesting question: is the classic 80’s film, Wall Street, a prequel to the Oughties classic, Kill Bill?  Or, in other words, does Bud Fox from Wall Street grow up to become Bud from Kill Bill?  Maybe only Daryl Hannah could tell us for sure, but I tend to think so.  Here’s my evidence:

In Wall Street, up and comer, Bud Fox, throws his lot in with evil capitalist Gordon Gekko.  Gekko, in turn, introduces Bud to Daryl Hannah, a beautiful blonde who seems too good to be true.  Bud soon falls for Daryl, unaware that she is in cahoots with an evil older man (Mr. Gekko).  In fact, Daryl once even dated Gekko, and her livelihood depends on him. 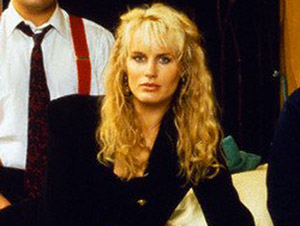 When Bud decides to turn on Gekko, Daryl freaks the hell out.  Her usually calm and cool demeanor changes in an instant, and she snarls something along the lines of, “If you turn on Gekko, we’re through, Buddy boy.”  Needless to say, Bud turns on Gekko, destroys his fortune, and sends him to jail.  Daryl just glares at Bud with a look of, “You will pay for this, bitch.  Mark my words.  You will pay with your life.”

Cut to twenty years later.  Bud’s been in jail for his white collar crimes, and there he turned from a skinny stockbroker to a badass.  As he’s grown older, he’s also gained a little bit of his father’s laid back personality, and also his father’s inheritance.  Martin Sheen, of course, disowned his other, eviller son, Bill, long ago, not wanting the man to use Sheen’s hard-earned blue chip airline stocks to fund a team of sexy assassins.  Bud uses the inheritance money to buy himself a trailer in Texas, a home base from which, he believes, he can achieve his father’s last wish: that his good son make his way in the world by creating something, not by leeching off the creations of others or killing people for hire.  Bud decides to become a sculptor.  He has given up his old ways and is at peace.

But someone else isn’t at peace, and that someone is Gordon Gekko.  He’s just been released from prison, too, and he’s out for revenge.  He sics his hoodlums on Bud.  Bud gets away with his life, but only by bashing the hoodlums’ brains in with his priceless sculptures, destroying them in the process.  Gekko has ruined Bud’s career again.

Desperate, Bud approaches his long lost brother, Bill, knowing Bill is exactly the person you talk to when you need someone dead.  Bill’s not particularly interested in killing Gekko; after all, Gekko is a former client of his assassination services and may want to do business with Bill again once he’s back in the black.  But, out of love for his brother, Bill gives Bud a priceless Hattori Hanzo sword engraved with the words, “To my brother Budd, the only man I’ve ever loved.”  And Bill adds, “I heard about your work with Gekko’s henchmen.  If you can dispatch his thugs with a sculpture, I can’t imagine what you could do with a Hanzo sword.  If you do manage to kill Gekko with that sword, come and talk to me.  I might have a job for you.” 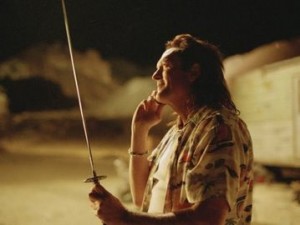 Bud’s not a killer by nature, but he has grown tough in the slammer, and, without his father, Daryl Hannah, or his former best friend and co-worker, John C. McGinley, around, he has nothing left to lose.  Anyway, in Texas, it’s kill or be killed.

Like clockwork, Gekko’s men arrive at the trailer the next day.  Bud doesn’t really know how to use a sword, but that doesn’t stop him from killing three men and taking the fourth as a prisoner.  Under duress, the fourth man reveals that Bud’s old best friend, John C. McGinley, is now Gordon Gekko’s new majordomo.  If Bud can find John C. McGinley he can find Gekko and kill him.  If he doesn’t, Gekko will certainly continue sending men until Bud is dead.  Gekko might even hire Bill’s Deadly Viper Assassination Squad to do the job.  And everyone knows the DiVAS never lose.

James Spader, then and now

It’s not easy finding John C. McGinley — Bud has to call in a favor with his old NYU business school friend, James Spader, who has gotten out of the high pressure investment banking game to become a lawyer up in Boston.  Spader informs Bud that John C. McGinley is hard to find because he’s pretending to be a doctor and has changed his name to Dr. Perry Cox in order to avoid the SEC.  Bud uses the information to find this “Dr. Cox” and kidnap him.

Bud and James Spader tie up “Dr. Cox” and begin to make him more open to questioning.  Bud threatens “Dr. Cox” with his Hanzo sword, and James Spader softens “Dr. Cox” up by ranting at him in an incredibly dramatic fashion.   At first glance, “Dr. Cox” may seem hard on the outside, but under pressure he immediately cracks and, sobbing like an infant, reveals the whereabouts of Gordon Gekko to Bud.  Gekko’s been hiding away at the house of famous Hollywood starlet Catherine Zeta Jones.

“Thanks for the help,” Bud says to McGinley as he spits some chewing tobacco on the floor and brandishes his blade.  “Now get out of here, or in a second there’ll only be two and a half men in this room.”

McGinley, then and now

Bud now knows where Gekko is, but he also knows Gekko will be much harder to beat than John C. McGinley.  Even if Bud can get past Gekko’s guards, who knows if he’ll be able to beat Catherine Zeta Jones.  Bud decides to ask an old friend for advice.  Terence Stamp, the British guy from Wall Street, once helped Bud take down Gekko financially; maybe Stamp can help Bud take Gekko down again–violently.

Bud’s hunch turns out to be right.  “It’s true that I am now an investor and an honorary knight, but I also used to be a general,” says Terence Stamp.  “I will teach you to use that sword and defeat Gekko, once and for all.” 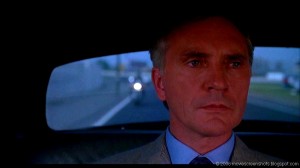 Stamp’s training tests Bud to the extreme, but in only a few months’ time, Bud is ready to face his nemesis.  Bud flies to California and easily dispatches Gekko’s goons and even the notoriously hard-to-beat Catherine Zeta Jones.  Frightened for his life, Gekko crawls away from Bud’s Hanzo sword, blubbering,  “We used to be a team, sport!  Don’t kill me!  I’m defeated!  What more could you want?”

“Because I’m greedy,” Bud says, and he slashes Gekko’s head off with one fell swoop.  And, looking at the glazed eyes of his former mentor, Bud nods and says, “You were right, Gekko.  Greed IS good.” 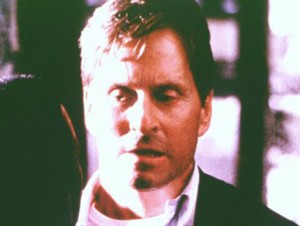 The next day, Bill introduces Bud to his new teammates: Beatrix Kiddo, Vernita Green, O-ren Ishii.  “And this,” Bill says, ushering Bud toward a blond woman in a catsuit, “is the California Mountain Snake.”

And, lo!  It is Daryl Hannah!  She is older and has an eyepatch now, but she is no less sexy.  Apparently, Gekko introduced Daryl to Bill when Bill said he needed a new interior decorator.  Daryl fell in love with Bill’s diabolical ways (we know from Wall Street she has a thing for older, morally dubious men) and vowed to do whatever it took to become useful to him.  She, therefore, flew to China to study under the swordmaster, Pai Mei, and lost her eye.

Now the remaining eye looks upon Bud with a cold and terrible rancor.  This was the man who broke her heart.  Bud betrayed his principles, betrayed Gekko, betrayed HER.  She will rip him to shreds. 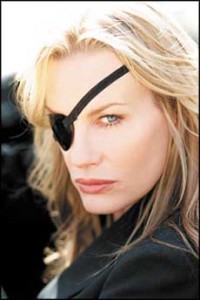 Unfortunately for Daryl, Bill puts his arm around Bud and says to his squad, “This is my brother, Bud.  I love him more than life itself.  He’s new to assassination, so keep an eye out for him.  If anything should happen to him, I will kill the person responsible.”  And he looks Daryl Hannah pointedly in the eye.

Bud goes out with the Deadly Viper Squad on a few missions to learn the ropes.  It’s all pretty simple work, and he doesn’t pay much attention to what he’s doing.  He just knows that he’s making money again, and he’s finally feeling secure in his life.

But soon Bud realizes who Bill is working for.  Many of Bill’s clients work on Wall Street, investing in bad loans and destroying the little guy.  Anyone who crosses them ends up dead, courtesy of Bill and his DiVAS.  Even their own Beatrix Kiddo takes a bullet in the head for going against Bill and threatening to reveal his own Ponzi scheme to the Feds. 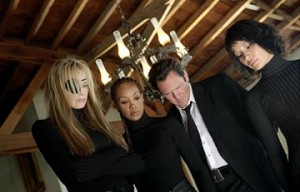 Bud sees what he has wrought.

Then, one day, the stock market crashes, and Bud realizes what he has done.  “I’m out,” Bud says to Bill.  “I promised Dad I wouldn’t work for Wall Street again.  I wouldn’t hurt the little guy.  But that’s exactly what the DiVAS do.  We’re just another instrument of the Man.  No wonder Dad disowned you.”

“You’re quitting?” says Bill. “But how will you live?  In that trailer?  How will you make money?”

The rest you know.  Bud tries to make a living, but he finds his MBA does him little good as a titty bar bouncer.  He turns to the bottle.  Life gets worse and worse.  When Bill arrives at his door a few years later, asking him to kill Beatrix Kiddo for a million dollars, Bud gives in.  He thought he could get away from that life, but he can’t.  It’s his destiny.  He buries Kiddo alive and finds Daryl Hannah delivering Bill’s million in a suitcase.

And finally Daryl gets her own revenge upon Bud, the man who was once a fresh-faced kid trying to make it in the world of finance.  As she watches him die from the bite of the black mamba, Daryl thinks, “There is justice in the world.  Only the blind can’t see that.”

Well, I think it’s a plausible story.  Don’t you?