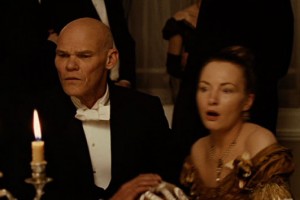 So I’m watching The Assassination of Jesse James by the Coward Robert Ford the other day. It has a great cast which includes Brad Pitt, Casey Affleck, Sam Rockwell, and Clinton strategist and CNN commentator James Carville. The Ragin’ Cajun shows up 90 minutes into the two-and-a-half-hour-long movie as the Governor of Missouri, and he’s got two big scenes – one where he gives a toast at a fancy ball, and one where he sends Affleck’s character out to get Jesse James one way or another.

Sometimes when you see quirky casting like this, it’s the director’s idea. Kevin Smith cast Alanis Morissette as God, and Christopher Nolan made David Bowie the inventor Nikola Tesla. But in this case the director, Andrew Dominik, actually complained publicly about being stuck with Carville:

I didn’t want to hire him in the first place. He came unprepared. He couldn’t get his lines out right. It’s like he has ADD. It took us three hours to shoot that one small scene.

First of all, Carville’s big scene is a solid two minutes long. I’m not a filmmaker, but shooting a two minute scene in three hours seems perfectly respectable – even speedy. So I have to imagine that Dominik really resented being saddled with Carville if he’s bitching in the press.

Presumably, it was some sort of producer that decided Carville should be in the movie. My question is, why? Carville had acted before, but almost always playing himself. What would make a producer want to give this guy a significant cameo, over the director’s objections? Your guess is as good as mine – post your theories in the comments.

The surprising thing is, Carville works (at least for me). As a political analyst he’s full of smiles and folksy wisdom – here, he’s all scowl and growl:

So congratulations James Carville. I have no idea how you wound up in this movie, but you’re not half bad.

(BONUS UNRELATED OVERTHINKING: This movie was in the “Action” section at Blockbuster. Whoever put it there has not seen it. I really liked the movie, but it is absolutely not an action film.)

One Comment on “Tucker Carlson, Eat Your Heart Out”