It’s official: the ascendancy of Barack Obama to the presidency and the departure of George W. Bush have brought about the End of Irony. The Daily Show is running out of jokes. Snark is at an all time low. Even Pabst Blue Ribbon is reporting its first quarterly loss since 2002.

However, we still have to deal with the untold amounts of irony-laden pop culture produced during eight years of Bush-induced cynicism and fear.  Chief among these is the seminal 2004 film, Team America: World Police. Though the exact intent of the film is open to debate, it is abundantly clear that the Bush Administration and its errant foreign policy were key targets of its savage satire. 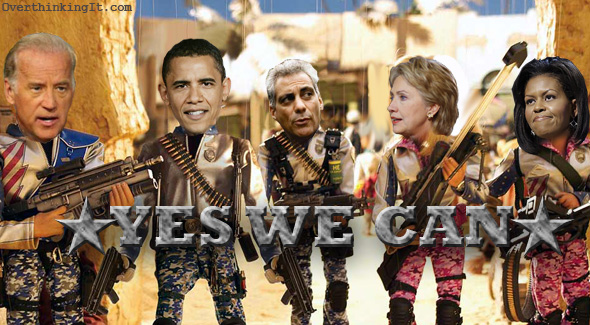 So in this New Golden Age of Pragmatism, Diplomacy, and Understanding, is Team America: World Police still relevant? The short answer is absolutely, yes: even though Bush is gone, Obama will soon be faced with many of the same problems that the World Police once confronted. Fortunately, though, the World Police also have the answers.

What’s our team up against?

The WMDs Are Still Out There

Iran, North Korea, Pakistan, and Syria are all serious proliferation threats. Kim Jong-Il is either still in power in North Korea, undermining disarmament negotiations, or (spoiler alert) somewhere in space, plotting his return. Whether Obama chooses more covert as opposed to overt action to find those WMDs’, he still has another problem:

And not likely to get better any time soon. Obama’s nomination for CIA director, Leon Panetta, has little direct I.N.T.E.L.L.I.G.E.N.C.E. experience and will likely face stiff opposition from the entrenched CIA bureaucracy. His first tasks, assuming he’s confirmed, may likely be to close down secret overseas jails and put and end to aggressive interrogation techniques. Necessary actions, of course, since these methods of I.N.T.E.L.L.I.G.E.N.C.E. gathering were arguably ineffectual, but these efforts will surely distract from the work that needs to be done to improve I.N.T.E.L.L.I.G.E.N.C.E. Like giving it more RAM and a CPU upgrade.

Actors are Still Meddling in Politics

Film Actor’s Guild members Susan Sarandon, Tim Robbins, and yes, Matt Damon were confirmed to be in town for the inauguration. F.A.G. member Samuel L. Jackson was even allowed a spot on Saturday’s pre-inauguration program:

The odds look pretty bad. Is there any hope for our red, white and blue way of life? Fortunately, Team America: World Police provides answers, and not just continuing problems, for Barack Obama:

Actors Can Be A Part Of The Solution, If They Majored In World Languages

Using trained, multilingual actors for covert operations accomplishes two goals: it increases our capacity to gather I.N.T.E.L.L.I.G.E.N.C.E. on our enemies, and it keeps actors from causing (unhelpful) international incidents. As an added bonus, putting more actors to work as spies will help the economy by creating more openings in the food services industry.

It costs a hefty f—-n’ fee. Given the size of the economic stimulus package Obama is proposing ($800 billion or so), the price of (economic) freedom works out about $2,600 per person, significantly higher than the Congressional Budget Office’s 2004 estimate of $1.05 per person. Nevertheless, the film deserves credit for making an initial attempt at quantifying the sacrifice we are all called to make for our country.

Do Whatever It Takes To Rebuild Trust

Team America: World Police shows us how trust is rebuilt.

"Oh, I am serious. Look. This is my serious face."

4 Comments on ““Team America: World Police” in a Post-Bush World”