On January 20, 2009, the presidency of George Walker Bush will come to an end, but his prevalence in the popular culture has been on the wane for quite some time already. Let’s examine his exit from the popular culture zeitgeist as measured by Google Trends.

Not surprisingly, both Barack Obama and John McCain had more Google search traffic than Bush for almost all of 2008.

But notice the small spike towards the end of 2008. Was George Bush making a comeback in the popular culture as Americans pondered his legacy?

Not so much. The spike seems to be attributed to the December 14 Iraqi journalist shoe-throwing incident. Even the online game “Sock and Awe,” which allows players to hurl shoes at Bush, was outpacing the President himself for a few days in December 2008. Apparently, a lame duck presidency is no match for a flash (pun intended) in the pan internet fad.

In 2008, Bush did manage to stay ahead of fake news personalities and consistent persecutors John Stewart and Stephen Colbert…

…but proved to be no match for cultural juggernaut Hannah Montana.

In 2008, Bush lost out to pretty much every popular culture meme in terms of Google search volume: “iPhone,” “Britney Spears,” and even “Battlestar Galactica” (for a few months in the spring).

So what cultural phenomenon did Bush manage to beat out for Google popularity in 2008? 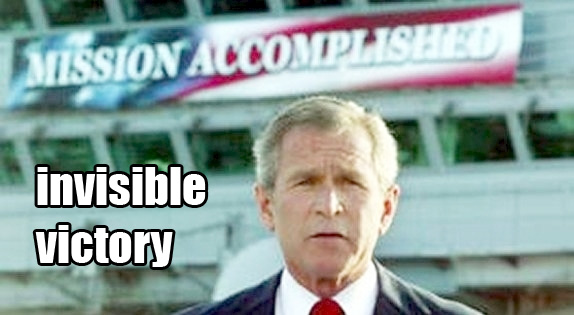 4 Comments on “George W. Bush: Going Out With a Whimper (on Google)”