[This post begins Back To The Future Week. Fasten your seat belt… where we’re going, we don’t need roads. —Ed.]

Back to the Future was on last night, so of course I watched it.  It’s a genius movie.  Not only is the script super-tight, but every single scene is famous.  In that respect, it’s like Casablanca.  But with Christopher Lloyd.  Score one BTTF.

I know it’s probably ridiculous to nitpick Back to the Future – after all, this movie presupposes that time travel is possible and that Deloreans are cool – but this is Overthinking It ™, so I’m going to do it anyway. 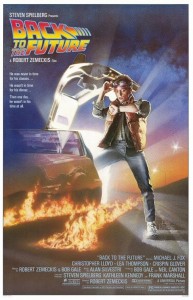 The problem I’m having is with the famous photograph.  In case you don’t remember, the plot is that Marty McFly goes back in time to the 1950s but ends up screwing up his own life.  When his own mother (Lorraine) falls in lust with him, it means that she doesn’t end up with Marty’s father (George, aka “McFLYYY”).  That means that Marty and his brother and sister won’t be born unless Marty can get his mom and dad back together.  Marty’s photograph of him, his brother, and his sister in 1985 is his link to the future.  If his image disappears from the photo, it means he was unable to set up his parents and thus, in this new timeline, he was never born.

The movie wants us to think that Marty’s siblings are slowly disappearing from the future, and audiences usually buy it.  But I don’t.  What the photograph actually means is that Marty changed the future so that his brother was indeed born—just without a head.

This is a future in which it is not out of the ordinary for headless people to be photographed by their parents.  Marty and his sister look perfectly happy standing next to their mutant brother.  The mutant himself looks pretty happy, too, assuming I’m reading his body language properly.

But that’s kind of weird.  Why would one small change in the 1950s past (Lorraine and George don’t get together) make the 1980s future so bizarrely different?  Why would that one “butterfly flap,” as it were, create a future in which normal teenagers live without heads?

The only way I can make sense of the photograph is to assume that Marty’s telling Doc Brown that his time machine works had huge implications for the future of science.  Maybe that boost of confidence allowed Doc Brown to invent a medical procedure that allowed people to live normal lives without heads.  Maybe Doc Brown invented the time machine in 1960 instead of 1985 and was subsequently hired by the U.S. government to develop an army of headless mutants to fight the Ruskies.  Or maybe he used his time machine to go far into the future to bring back super-technology to build headless brother robots to replace those human brothers who died in Delorean accidents in the 1980s. 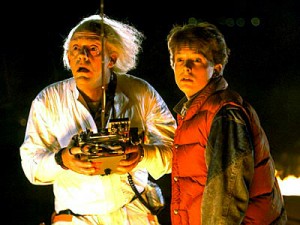 Sadly, we’ll never know what the alternate history in that photograph actually looked like and how it came to be.  Perhaps Steven Spielberg would like to write Back to the Future ½ to fill in the details?  If anyone else has a theory on how this photograph makes sense, I’d like to hear it.

(Next time on “Stupid Questions About Back to the Future” : If Lorraine really liked the name Marty, why did she wait until her third child to use the it?)