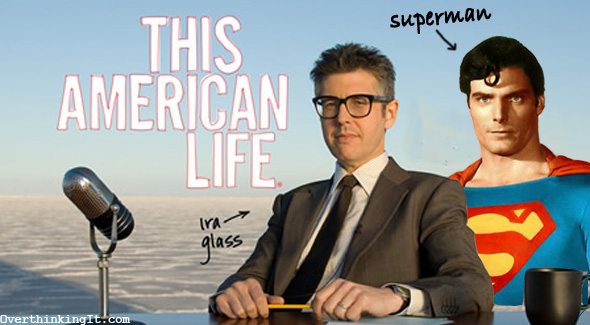 This radio show, made famous for its true-life storytelling on subjects ranging from building superintendents to summer camp, occasionally dabbles in the world of fiction. Very occasionally, they dabble in the world of superhero fan fiction. They’ve done so on at least 2 different occasions, both with stories by writer Jonathan Goldstein:

Episode 198: “How to Win Friends and Influence People.” A sad-sack man tells what it’s like to date Lois Lane after her break-up with Superman… while also serving as Superman’s ineffectual sidekick. It’s not easy being Superman’s sidekick, especially when he starts hitting on your girlfriend. Luckily, he finds a comforting soul in Clark Kent.

Episode 241: “20 Acts in 60 Minutes.” The Penguin and Mary Poppins compare notes on umbrella flight techniques only to find they have little in common. To make matters worse, Mary loses interest in the Penguin and strikes up a conversation with Bruce Wayne about controlled jumps off of buildings.

Note that we have at least two violations of Mlawski’s rules on good fanfic: both stray far from the mood and style of their original sources, and the second one crosses over two different fictional universes. Fortunately, these rules aren’t hard and fast; besides, more conventional fanfic wouldn’t really work in the context of, you know, NPR.

Readers: what are some other unlikely sources of fanfic, superhero or otherwise, that you’ve found?

10 Comments on “An Unlikely Source of Superhero Fan Fic”