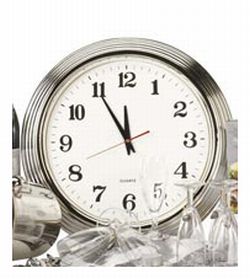 You may have heard that we had a leap second on Dec. 31, 2008, between 6:59 and 7:00 pm EST.  I told a bunch of people about the leap second (which is like a leap year, but only a second long) at the New Years party I was attending, and the responses were typical:

“A leap second!  What will they think of next?”

“Silly scientists.  They have too much time on their hands.”

“Who needs a leap second, anyway?”

But I have a public service announcement for all of you.  The leap second is serious business.   If you failed to change your clocks and watches, please change them now.

Well, who is going to have egg on their face when they arrive on Earth in 2008 IN THE MIDDLE OF A MOUNTAIN?!  You, that’s who.

Because, as we all know, time doesn’t work independently.  Time is connected to space.  So if you arrive at the wrong time, even if you’re only a leap second off, you’ll arrive in the wrong place.  Maybe you’ll only end up down the road from your original destination.  Or maybe you’ll end up in the Earth’s orbit.  I don’t know; I assume it depends on how your time travel device works.  But I wouldn’t want to leave it to chance.  Would you?

So please, OTI readers, for humanity’s sake, obey the leap second.  John Connor is counting on you.