[The “Musical Talmud” is our ongoing series that finds the true meaning behind pop music lyrics.] 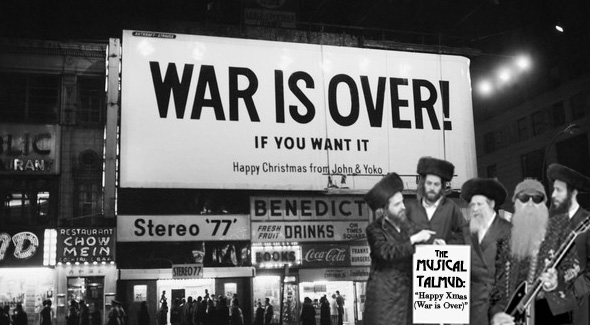 Christmas Talmud? Oy vey. That’s our awkward way of wishing you a Happy Overthinking It Holiday Season. Let’s take a deeper look at John Lennon’s protest/ Christmas song, “Happy Xmas (War Is Over).” Since the meaning behind this song is already well known–it’s a protest against the Vietnam War–I’m going to use this as an opportunity to examine this song as an example of “earony.”

For those of you who missed it, the term “earony” was recently coined by OTI writer Matt Belinkie in the context of the “40 Inspirational Speeches” video montage. According to Belinkie:

Earony means something which is enjoyed partially earnestly, partially ironically. Let me try and use it. ‘The South Park movie is an earonic take on musicals.” That is, the movie both mocks musicals and celebrates them.”

Along those lines, this song is John Lennon’s earonic take on Christmas and Christmas songs.

Before the music starts, if you listen very carefully, you can hear the following dialogue:

John and Yoko are wishing their kids a Happy Christmas. Earnestly. What parents wouldn’t?

Now, moving on to the song itself:

So this is Christmas
And what have you done?
Another year over
And a new one just begun

“So this is Christmas” can be read two ways: one, earnestly, another, ironically. Earnestly, Lennon could be stating “so this is Christmas” as one states “so, this the dining room” when giving a tour of a home to a visitor. Ironically, Lennon could making a statement of disappointment, as a commanding officer would say to a ragtag bunch of poorly equipped soldiers assembled before him: “So this is my strike team?”

What have you done?

Lennon follows this ambiguous statement with a question: “And what have you done?” It’s either a simple invitation to reflect on the year gone by, or a bewildered accusation. Much like a mother walking into a room after a child’s destructive rampage: “What have you done?!?”

“I hope you have fun:” To fully appreciate why this is an earonic wish, you have to remember the full scope of the historical context. The song was recorded in New York City in October 1971; these were not good times in America. The Vietnam war draft was still in effect, and the country was still reeling in the turmoil surrounding that war as well as the civil rights movement. Sure, Lennon may be earnestly hoping for fun times in the coming year, but he can’t be doing so without know how decidedly un-fun things were at the time.

And so this is Christmas
(“War is over, if you want it,” repeated)
For weak and for strong
For rich and the poor ones
The world is so wrong

This iconic phrase, “War is over, if you want it,” deserves some serious Overthinking(TM).  The effect of repeating this phrase in music, with a children’s choir, is quite different from reading this on a billboard, poster, or Christmas card (where it originally appeared). In the case of the billboard, the message is something you take in quickly and process in your head. Maybe you give it a little thought, something along the lines of, “that’s a nice sentiment; kind of cheeky, maybe a little naive,” but the message is quickly crowded out by the passing cars, buildings, and people.

In the case of the song, however, this phrase is repeated over and over in a mantra-like way.

It’s sung by a children’s choir, the very embodiment of Christmas earnestness. It elevates the song, which up to that point is quite bleak, to a level of exuberance and joy that you’d expect from an earnest Christmas song.

But remember, we’re dealing with earony here. Although Lennon is earnestly issuing his call to grassroots activism as a way to prevent war, he creates earony by juxtaposing the earnestness of the appeal and the exuberance of its delivery with the irony of the unfulfilled potential and disappointment of Christmas.

In fact, this song perfectly captures the earony of Christmas. It’s been an earonic holiday since its first instance, when monarchs from afar came to visit the King of Kings in a stable surrounded by livestock. Earnest devotion, ironic setting. It’s an exceptionally earonic holiday in modern America, where evangelical religious fervor runs parallel to rampant commercialism. Earnest devotion, ironic cultural values.  Strains of “Joy to the World” in the shopping mall run parallel to pessimism over unending wars and a crashing economy. Earnest hope, ironic cynicism.

I’m not going to parse out the rest of the lyrics, since they pretty much follow the same pattern of juxtaposing the disappointment of Christmas with the earnest strains of “War is over, if you want it.” Instead, I’m going to conclude with an appeal to my fellow Overthinkers: whether you’re religious or not, don’t get lost in the irony of Christmas. I know it’s tempting, especially in these difficult times. But the Christmas message of Peace and Hope has a universal appeal, and we won’t realize that aspirational goal by wallowing in irony and cynicism. It’s going to take some earnest action on all of our parts.

Have a Merry Earonic Christmas. And I mean that earnestly.

One Comment on “The Musical Talmud: Happy Xmas (War Is Over)”