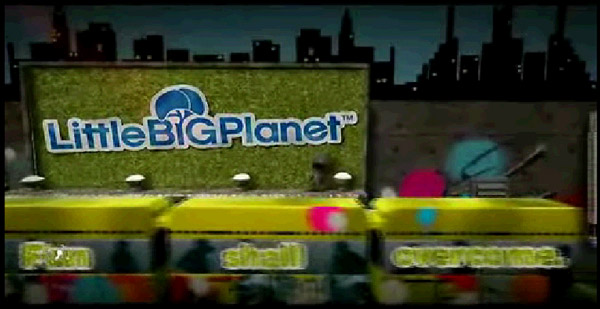 A freeze frame from the game's launch commercial, as the motto scrolls by. Click the photo to watch.

Little Big Planet is one of the marquee titles for the PS3 this Fall. Basically, imagine a Marioesque 2-D sidescroller, but with tricked-out graphics and the ability to design levels. I’ve played it a little, and it is too cute for words. 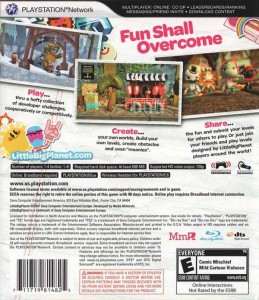 The back of the LBP planet box, with the slogan at the top.

But recently, I got a look at the back of the box, and something made me raise an eyebrow. The game’s motto is apparently “Fun Shall Overcome.” A little clicking around revealed that they’re pushing the slogan pretty aggressively. For instance, an official press release announcing the street date was titled, “Fun Shall Overcome on October 21.”

It’s entirely possible that I’m just being a typical liberal, seeing controversies where there aren’t any. But I’m not offended, just curious. This wasn’t picked as the slogan by accident – what’s Sony up to here?

First, let’s assume for the sake of argument that yes, they’re deliberately making a connection between LPB and the Civil Rights movement. What’s their point? Well, maybe the subtext of the LBP ad campaign is that fun has been a second class citizen is videogaming recently. Titles like Gears of War, Halo 3, and Metal Gear are epic, stunning, and challenging. They are the bread and butter of hardcore gamers. But perhaps (implies the ad) fun has become an afterthought. Fun, you might say, has been riding on the back of the bus. By emphasizing fun, Little Big Planet is therefore revolutionary, and by playing it, you’re joining a Movement. You’re thumbing your nose at all those other games. “Fun Shall Overcome” makes it seem like LBP is the underdog, and by jumping onboard, you’re standing up for Fun.

It seems like Sony is trying to have it both ways with this slogan. It’s meant to invoke certain concepts – revolution, struggle, a noble fight for ideals – but not to directly call Martin Luther King Jr. to mind. They want positive associations with the Civil Rights struggle, but not a direct connection. And since I seem to be the only person on the internet talking about this, I’d say they succeeded. 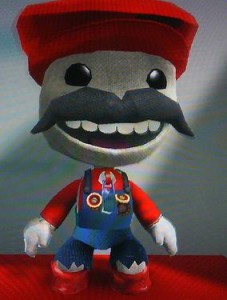 But I also think the slogan works on another level. Sony denies this, but it’s pretty well accepted in the industry that the PS3 is underperforming. It’s sold about 17 millions units worldwide. Not terrible, but the Playstation 2 sold 140 million over its lifetime. More importantly, the Nintendo Wii and the X-Box 360 have been outselling the PS3 handily.

Some analysts say that the problem is that the PS3 has positioned itself as a machine for serious gamers – and as a result, the casual gaming demo has completely bypassed it for Nintendo’s cheap, easy, fun machine.

I almost feel like “Fun Shall Overcome” is a meta-slogan, meant to address Little Big Planet’s role in the console wars. “Okay, the PS3 has had some trouble in the marketplace. But we’re about to turn things around. Fun Shall Overcome.” The LBP slogan is a counterinsurgency strategy – Sony’s trying to beat Nintendo by taking a page from its playbook.