[More guest post goodness today, this time from John Perich. Let us know what you think in the comments!] 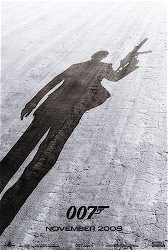 Quantum of Solace, last weekend’s highest grossing movie in America, was originally a short story, and is one of the few titles left in the canon of James Bond literature actually written by Sir Fleming. Unless we start delving into sleepers like “The Hildebrand Rarity” next, they’ll either have to go back to making titles up or remaking the classics.

So what exactly is a “Quantum of Solace”? And what can we expect from future Bond titles?

The short story involves a long-winded anecdote told by an aging British civil servant after Bond makes an off-the-cuff remark.  It has nothing to do with the movie.

“Quantum” is not just an adjective that makes things sound sci-fi, as it turns out.  A quantum is the most basic unit of energy, or, outside of physics, the smallest independent unit of something — the tiniest piece that isn’t a shard, but is a thing of itself. “Solace” means “comfort in sorrow.”  We distinguish it from the regular peace of a hot shower, since solace is the peace that follows despair.

Combining the two, we have a “small unit of comfort.” 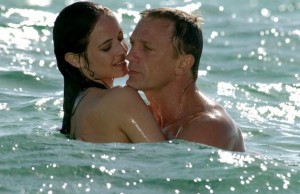 We know, after Casino Royale, that — SPOILER ALERT — Bond lost a woman he cared about a great deal.  He also learned the whereabouts of her handler in an elusive criminal conspiracy (possibly called SPECTRE, possibly not) and shot that man in the leg.  This much is certain.

We can also presume, based on the Quantum of Solace trailer, that Bond does not let this lie.  Rather, he hounds these shadowy masterminds across the globe, shooting and exploding things to avenge the death of the woman he loved.

Revenge will not bring Vesper back.  But knowing that the men who manipulated her are dead will appease Bond’s savagery.  It will bring him the tiniest possible measure of solace — perhaps one quantum, perhaps several quanta.

Presuming the success of quantizing abstract emotions, what more can we expect from the franchise?

JAMES BOND WILL RETURN IN: FRAGMENT OF JOY
Chasing a SPECTRE agent through a carnival in the Netherlands, James drives over a small wooden horse that a boy won from a carnie barker.  Seventy minutes later, after the villain’s base has been blown up and the villain’s mistress properly rogered, James stops by the boy’s home.  He leaves a wooden horse on the doorstep, rings the doorbell, and vanishes before anyone answers the door.  Driving off in his Aston-Martin DBS, he allows himself a brief, unironic grin.

JAMES BOND WILL RETURN IN: FRISSON OF ANGER
Bond seduces a SPECTRE agent and uses her knowledge to infiltrate the villain’s Russian organization.  After a twenty-minute setpiece aboard a yacht that’s also a chopper, she and Bond fall into the sack for one last romp at a villa on the French Rivera.  Getting up for a post-coital martini, Bond spots a red glow coming from one of her earrings – it’s secretly a coded transceiver!  She wasn’t working for SPECTRE after all, but the Russians!  Bond gets angry at her for a fraction of a second, then realizes she played him no worse than he played her.  He dons his Omega watch, then stalks off into the night, ignoring her pleas.

JAMES BOND WILL RETURN IN: FILLIP OF BOREDOM
M calls in all the double-0 agents in Europe for a briefing on a global crisis.  Bond, more of a shooter than a planner, loses interest after a mere ten seconds and begins scanning the room idly.  In doing so, he spots a spy mic in one of the agent’s briefcases.  A frantic chase through MI-6 ensues, culminating in a shootout on the rooftop between James, a double agent, and a sniper from a helicopter.  M asks Bond afterward how he spotted the mic.  “I’ve learned to trust my boredom, M,” he quips.  “It’s kept me alive.”

JAMES BOND WILL RETURN IN: INCREMENT OF DESPAIR
An unexpected attack on MI-6 catches Bond unawares.  He sprints through the halls, fighting off terrorists and double agents while struggling to keep other employees safe.  M is captured and his coworkers are taken out of commission.  Sprinting into the streets, he shoots down an enemy helicopter with several well-placed assault rifle shots – only to see it land on his Aston-Martin.  He frowns…but just for a second.

JAMES BOND WILL RETURN IN: MINUTIA OF HOPE
A terrorist attack on the Olympics forces Bond to spring into action.  He chases an enemy agent down an ice luge, then borrows an air rifle from the biathlon team to snipe him down at a distance.  With his dying breath, the agent sets off a chain reaction of explosives in the Olympic Village.  Dozens of the world’s best athletes are killed in a fiery conflagration.  Bond stumbles through the wreckage, dazed at the tremendous loss of life.  Suddenly, he hears rubble shifting.  He shoves his way through the emergency responders and flings rubble aside, to find a shapely Ukrainian gymnast alive under piles of blasted stone.  He later sleeps with her.