[We continue our series of guest writes with a post from Tevor Seigler. We depend on your input to help us evaluate new writers, so let us know what you think in the comments!]

Some actors are icons because of a singular performance which ensures that, no matter what else they do, they will be known as “that guy.” For me, Wilford Brimley gave that performance every time he sat down to film yet another Quaker’s Oats commercial during the Eighties.

As a child of that decade, I was overwhelmed by the more overtly materialistic aspects of other breakfast food icons: Count Chocula liked little boys, Tony the Tiger was on cocaine half the time, and the hellish trio known as “Snap, Crackle, and Pop” was rocked so badly by the death of original “Pop” John Belushi in 1982 that they never really recovered. Against such hedonism, Mr. Brimley’s turn as the kindly grandfather who force-fed warmed-over corn mush to his brood seemed old-fashioned and homely. Darn near American, really.

Brimley apparently also starred on a TV show called Our House, which I have little memory of. He may have had a guest-starring turn on Alf, for all I know. I haven’t spent much time looking up his resume on IMDB.com [Ed. Note: Are you sure you’re on the right blog?], so I can’t verify that.

But I was rocked out of my comfortable portrait of Brimley as the kindly grandfather that America needed in the Eighties by two roles. The first was in The Firm, a John Grisham book that was made into a Tom Cruise film (both seemed like a good idea in 1993, to be fair). Brimley was the heavy, literally, as the morbidly obese head of security for a mob-fronted law firm that…did some illegal shit, apparently. Brimley huffed and puffed and nearly had a coronary trying to run down the much more athletic Cruise, but he was done in by the younger man beating him…with his briefcase. Yes, apparently you can beat an elderly American to death with a leather briefcase. Good to know, should you ever find yourself cornered by an old man and you are armed solely with a briefcase.

But the role that really altered my perception of America’s Grandpa was that of Blair in John Carpenter’s The Thing. Brimley starts off fine, if a little gruff, and you wonder at what point he’s going to do a little product placement for Quaker Oats. Maybe it will come before the mysterious dog explodes into a multi-tentacle-sporting monstrosity. Or around the time that the one guy’s chest opens and chews off the doctor’s arms. But Brimley gets to be the guy who figures out that the alien creature invading the camp has already managed to get to one or more of his colleagues, and so he does what comes naturally to a man of science when confronted with possible apocalypse: He goes ape-shit with an axe. 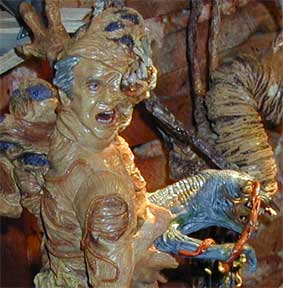 They made a toy out of his character. That is seriously wrong.

Because Brimley goes nuts, Kurt Russell and the other guys lock him up in the utility shed for his own good. But the joke’s on them: in the end, Brimley ends up being the big bad alien monster that nearly kills what’s left of the group. He does this by shoving his fingers into Donald Moffat’s face and tunneling under the ground towards the dynamite fuse box before Russell can set it off. Brimley gets to be a giant worm with fangs coming out of one side of his face and growl at Russell before getting blown up with the entire camp. Definitely a better onscreen death than in The Firm.

So I guess what I’m saying now is this: Wilford Brimley is not who I thought he was. He could be telling me all about diabetes testing supplies, and all I would see is a tentacle coming out of his side and trying to absorb me into his pudgy alien mass for nutrition. Wait, those aren’t oats in that cereal bowl…