The Dark Knight is now the second-highest grossing film in Hollywood history, behind Titanic. In a lot of ways, these two movies are polar opposites. One’s a bittersweet historical romance. The other’s a punishingly bleak superhero sequel. But there’s one thing they share: a prominently featured line. 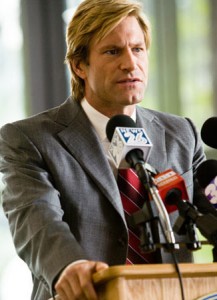 In both movies, the line is paraphrased twice. It first appears early on, when a character introduces it as a personal motto. In The Dark Knight, it’s cocky District Attorney Harvey Dent, about to start a big trial. In Titanic, it’s Rose’s cocky fiancé Cal Hockley, responding to Jack Dawson’s tale of winning his ticket in a poker game. (His actual words are “A real man makes his own luck,” but it’s pretty clear who he thinks the real man is.)

The line returns later in both films, when it’s revealed that those characters aren’t playing fair. Rachel Dawes says “You make your own luck” when she realizes Harvey’s lucky coin has heads on both sides. Cal says “I make my own luck” as he stuffs his coat with cash, preparing to buy his way off the doomed boat.

Here are the four lines together:

Harvey and Cal share more than dialogue. They both start out their films as good guys. (Okay, Cal’s not exactly a “good guy,” but Rose is planning to marry him.) But after they lose their fiancés, they become the primary antagonists, trying to kill the people who once trusted them. 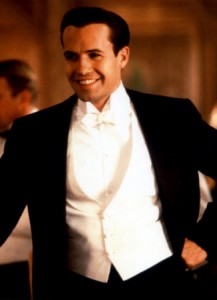 More to the point, they’re both supremely confident men. Dent really believes he can single-handedly bring down the entire mafia, and Cal can’t imagine a universe that doesn’t revolve around him. “I make my own luck” is a reflection of their worldviews – they think they lead charmed lives. But of course, they both prove incapable of making their own luck, becoming victims of the Joker and Leonardo DiCaprio, respectively. And because they’re so self-confident, they react to misfortune with murderous rage.

The question is, did Dark Knight co-writer/director Christopher Nolan put this line in his film as an homage? Or is it just a coincidence? On the one hand, people were saying “I make my own luck” before Titanic. But on the other hand, the line’s become pretty well-associated with that movie in the past ten years. There was even an episode of The Office where Dwight declared, “‘A real man makes his own luck.’ Billy Zane, Titanic.”

Whether or not Nolan had Zane in mind, I wonder if “I make my own luck” is a sort of self-fulfilling prophesy. Put that line in your screenplay, guarantee yourself 500 mil domestic. We’ll see what happens the next time it shows up. Maybe it’s a lucky charm.

12 Comments on “The luckiest line in movies”