[We are proud (and more than a little astonished) that our quirky little blog has been finding an audience, and that so many of you seem to share our obsessive and idiosyncratic take on popular culture. It is particularly flattering that we have received a few requests to write on the blog. Today we welcome the first of what will eventually be several guest bloggers, some of whom may become regular bloggers. (Let us know what you think in the comments!) Enjoy this post by Diana Barnes-Brown, and if you’re interested in writing for the site, contact us at webmaster at overthinkingit dot com. –Ed.] 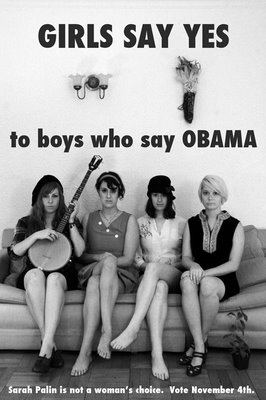 Some Brooklyn women who happen to support some guy named “Barack Obama” for President have created an advocacy poster that’s been getting a lot of recent media attention. Inspired by an anti-Vietnam poster that showed Joan Baez and her sisters making a similar promise to boys who protested the draft, the new poster proclaims that GIRLS SAY YES TO BOYS WHO SAY OBAMA.

In both versions, a row of women sits on a couch in their mini-skirted, mod-ish finest, looking into the eyes of potential candidates (so to speak), and apparently prepared to either spread ’em or cross ’em depending on voting choice.

What does this mean to fans of sex, feminism, applied linguistics, mod fashion, and, to a lesser extent, electoral politics?

Due to serious fish/barrel issues, I’m not even going to touch the girls versus women vocab choice here. For the purposes of this treatise, I will use the terms girls and women, as well as boys and men, interchangeably.

More definitions to get out of the way:

And, since these two ideas are the sole bits of language juxtaposed in one piece of advocacy, it makes sense to assume a causal link between sexual consent and the Obama vote. Let’s run that through the Semantimatic 2008™ and see what we get:

Women consent to sex with men in exchange for their Barack Obama votes.

So we now have a barter arrangement involving the exchange of sex for a desired nonsexual behavior. A swinger for every swing vote — Huzzah!

What’s wrong with this picture?

There are two main problems with all of this. The first is the target audience. Would boys who aren’t currently “saying Obama” start “saying Obama” at the promise of sexual favors?

The second is what it says about the left-of-center women who made, and/or agree with, this poster. Is it hypocritical to engage in partisan, transactional sex when your politics are leftist, and thus at least kind of feminist?

Let’s start with the target audience stuff. As the Clinton/Obama supporter split and subsequent Palin nomination reminded us, people definitely do vote on the basis of their feelings about gender, and specifically about women. Some women who had supported Clinton did so so fervently that they even vowed to vote for McCain as comeuppance for what they saw as the gender-based unfairness of Obama’s nomination. And in the case of Palin, there’s been a maelstrom of chatter about her ability to appear as a MILF to conservative male voters and a pit bull to angry, or at least disenfranchised-feeling, conservative women. 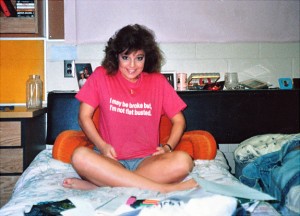 More specifically, people who, to my knowledge, currently have no plans to “Say Obama” include:

(Okay, I’ll lop off that last group because it’s somewhat to the side of this discussion, but, with all due respect, I still think it’s hilarious. Though it’s unquestionably true that the world would be much cooler if dinosaurs had, in fact, walked the earth with man, and even better if they still did, because then we could fight velociraptors when we got bored.)

Contemplating the other three bullets, I can’t help but think that any of these people, given their other beliefs about women and what they should and shouldn’t be doing, would be at the very least mildly repulsed at the offer of sex for a swing vote.

Even assuming a denial- and contradiction-laden interior life, it’s a risky strategy. Getting a bunch of people they don’t like to offer them something they won’t admit to wanting and don’t think anyone else should have seems unlikely to change the way they vote. 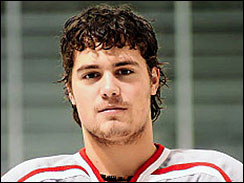 If the poster alienates the people whose minds it’s interested in changing, then the remaining audience contains mostly people already sympathetic to its worldview, which runs far counter to the ideas and feelings about women shared by key blocs of McCain supporters.

The people who share the poster’s worldview (that women ought to choose their own sexual partners, use contraception, keep responsibility for their bodies and have sex when and with whom they choose) will probably be voting for Obama anyway, which makes all those sexual favors, though possibly fun, basically wasteful from a functional perspective.

(As a side note: Sure, girls say yes to all kinds of people, and so do boys, and those people, even the conservative ones, are pretty into it, which makes the statement on the poster, though possibly not untrue, incomplete.)

My country, right or wrong?

Then there’s the whole issue of whether it’s okay for women, or anyone, to use their bodies and sexuality for material or conceptual gain. To many, this is a form of objectification, and thus really, really not okay. In the case of the poster, there is the offer of actual transactional sex — sexuality-as-currency demarcated in votes rather than dollar bills.

Sex is exchanged for food, shelter, protection, or other gains all over the world. These arrangements disproportionately involve women and children and are often to their detriment. 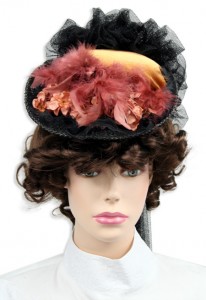 Transactional sex, depending on whom you ask in the international human and reproductive rights circuit, may be characterized either as sex work, coercive sex, or both. The line often depends on whether the gain from the sexual interaction is a basic and immediate need — such as persuading a member of an invading tribe not to shoot your children — or a more distant and optional sort of gain — such as being given an especially fetching hat. (See illustration.)

It’s hard to make the argument that the Obama situation involves basic and immediate need, so this would almost certainly be characterized as by-choice sex work (more along the lines of the fetching hat scenario than the dead children scenario). A “desperate times, desperate measures” approach by four Caucasian, American women with enough money for photographic equipment, nice dresses and medium-quality digital and print imaging services rings comparatively hollow.

So, then, these relatively privileged, relatively safe women want to, but don’t have to, offer up their bodies in exchange for swing votes. BUST, a self-proclaimed online arbiter of all things “fierce, funny, and proud to be female,” commends the “cheeky ladies” for “encouraging youth participation in voting (and lookin’ good).” But, since we’ve covered the issue of functionality, it would seem that they’re just “lookin’ good.” 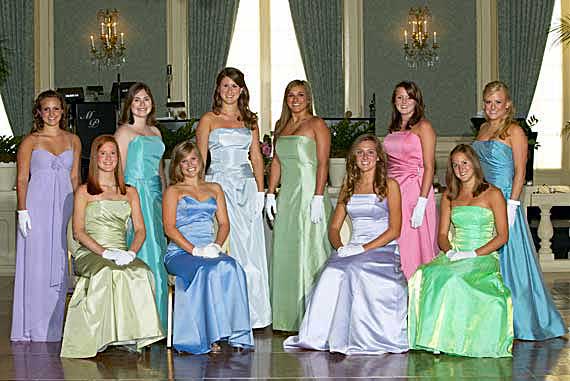 Kate Harding of Salon.com’s Broadsheet manages to avoid any Palin-istic g-dropping and simultaneously tackles a far more disturbing aspect of the messaging, noting that the poster supports the whole notion of women as “merely gatekeepers for our own vaginas, not human beings with actual sex drives. We just say no as a matter of course until men do something wholly unrelated to sex (buy dinner, vote for Obama), which makes us decide they’re worthy of coming inside us. We certainly don’t want sex for its own sake!”

Obama supports, or at least professes to support, the idea of a world in which all humans are equal – so, that’d be one in which women and minorities are respected and given credibility equal to that of their male and/or majority counterparts. But the poster is depicting a world that’s anything but. It makes light of an international human rights issue, commodifies women’s bodies and implies that women can’t be trusted to have sex without a nonsexual motive. And it either alienates (or just rings false to) the very people whose minds it supposedly wants to change.

Women often have difficulty finding people who disagree with them sexually attractive, and there are quite a few theories floating around in the ether that suggest they are more prone to respond to non-physical ideas of attractiveness than men. For me, it would be a hard choice to have sex with a person with whom I disagreed profoundly for any reason. But that is not the same as offering up, to an unknown and undifferentiated mass of men, unconditional sexual consent in exchange for nonsexual gains. 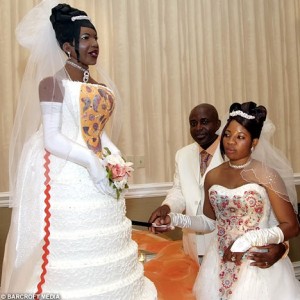 I’d like to believe women have other powers of persuasion — for example, language — that are more effective. But the poster gets me worked up precisely because it does seem to please a lot people, suggesting that with just Photoshop, eyeliner, a derivative sensibility and a whole lot of narcissism, you too can — and should — get yourself plastered all over the media. No matter if you find yourself balls-deep in hypocrisy in the process.