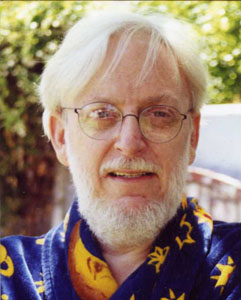 Dan O'Bannon, apparently wearing some sort of bathrobe or kimono.

If you’re any kind of a geek, you’re currently saying to yourself, “But wait, isn’t George Romero the undisputed creator of the modern zombie?” Night of the Living Dead did indeed make zombies into one of our collective nightmares. But it was Dan O’Bannon’s lesser known Return of the Living Dead that introduced some of the big “rules” for zombies that are now almost universally accepted in the genre.

What’s interesting about the zombie is that it’s the only major movie monster that didn’t reach maturity in the 30’s or 40’s. Dracula (1931), Frankenstein (1931), The Mummy (1932), and The Wolf Man (1941) created pop culture archetypes that were pretty cemented by Pearl Harbor. There were also plenty of zombie movies being made during this period. In fact, I had the pleasure of interviewing Scott Kenemore, the author of the very clever self-help guide The Zen of Zombie, and he told me one of his favorite zombie films is actually from 1941.

(It’s called King of the Zombies, and if you click here you can watch it for free.) There were enough zombie movies being made in the 40’s that the genre earned its own spoof, Zombies on Broadway. Presumably, this was the Shawn of the Dead of its day. 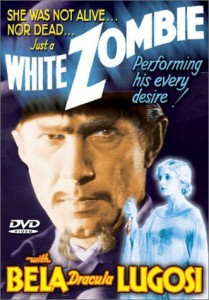 Anybody care to name that dude's beard style? I'm going with "The Parenthesis."

However, these zombies weren’t zombies by today’s standards. In these movies, the zombie was most often the result of a somewhat-racist voodoo curse or potion. And instead of rotting corpses, zombies were usually people in some sort of trance, under the command of whoever had cast the spell. (In the early classic White Zombie, Bella Lugosi makes zombies work his sugar mill for him.) Moreover, zombiism isn’t contagious.

The zombie as we know him did not exist until Night of the Living Dead, in 1968. Romero’s creatures were gruesome to look at, bloodthirsty, and without logical explanation. But the real innovation of the movie is the concept of the “zombie apocalypse.” The zombies were not just a threat to the protagonists – they seemed destined to overrun civilization itself. Zombies put the survival of the human race very much in doubt.

The movie set a powerful template – a small group of people struggle for survival against a horde of zombies, facing the possibility that the world as they know it is being eaten alive, and (usually) learning that their fellow survivors are more dangerous than the dead. This formula has been so effective that almost nobody has attempted to depict a zombie outbreak from any other perspective than that of a small group of people struggling for survival. (Although Lord willing and the crick don’t rise, we’ll someday see J. Michael Straczynski’s adaptation of World War Z. Please please.) 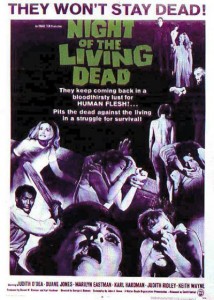 But although the idea of the zombie apocalypse was more or less set in stone in 1968, the zombies themselves weren’t quite as we know them today.

The final pieces came in 1985, with the release of Return of the Living Dead. It was written and directed by Dan O’Bannon, whose big claim to fame was writing Alien. O’Bannon’s zombies were definitely akin of Romero’s, but the rules were different. Below is a point-by-point comparison between the two breeds. (Note to the all uber-geeks: I know Return of the Living Dead was loosely based on a novel by John Russo, Romero’s co-writer on Night of the Living Dead. But I haven’t read the novel, and by all accounts, O’Bannon really changed it significantly. So for purposes of this post, I’m going to treat O’Bannon as the sole creative force behind Return.)

How You Become a Zombie

Romero: People become a zombie after they die for any reason (unless they die via massive brain trauma). In the Romeroverse, if you drop dead of a heart attack in your sleep, you get out of bed a zombie. If you drown, you climb out of the ocean a zombie. NOTE: Being bitten by a Romero zombie will turn you into a zombie. But in my mind, it’s pretty clear than the bite of a Romero zombie simply kills you… and it’s death, not any virus in the bite, that makes you a zombie.

O’Bannon: You become a zombie if you bitten/bled on/drooled on by a zombie. In other words, zombiism is a virus, spread by direct contact. 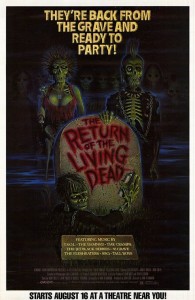 The Modern Zombie: This is probably O’Bannon’s main contribution to zombiedom – almost every recent zombie movie follows the “infectuous disease” model. Even the 2004 remake of Romero’s Dawn of the Dead scrapped the idea that a non-zombie related death still produces a zombie.

This, to me, is a shame. There’s something altogether too simple about treating zombiism like the common cold. That makes the problem comprehensible and solvable: once you eliminate the zombies, things are back to the way they were. But if the problem is that death itself has fundamentally changed, how do you cope? You have to accept that your life is either going to end with you attacking your friends and family, or someone shooting you in the head. Those are the only two options.

Another problem I have with the infectuous disease model – it dilutes the idea that these people are actually DEAD. You start thinking of them as “infected,” which makes it less horrifying. Sometimes in this type of zombie movie, people go from being alive to being a zombie with no point at which they can said to be simply dead.

Romero: His zombies are very dumb indeed. They’re like insects – if they see food, they’ll go right at it. Otherwise, they mill around aimlessly, moaning. The closest they come to intelligence is wandering over to the mall, out of some vague memory that it’s a place they liked when they were alive.

O’Bannon: Zombies seem to retain human-level intelligence. In Return, even a very decomposed zombie is clever enough to use a winch and rip a door off its hinges. And in one of my favorite scenes, two paramedics get ripped to shreds the second they step out of their ambulance, and one of the bloody zombies grabs the radio and growls, “Send… more… paramedics.”

The Modern Zombie: Varies from movie to movie, but generally zombies are on the dumb side. However, I’ll point out that in Romero’s later Land of the Dead, the zombies seem to be getting smarter. I’d say the pendulum is swinging O’Bannon’s way, but Romero still takes this category.

Romero: Zombies are stiff, uncoordinated, and slow. A single zombie might not be much of a threat.

O’Bannon: Zombies have human or even superhuman strength, speed, and aggression.

The Modern Zombie: Much to my annoyance, “fast zombies” have been in vogue in recent years (28 Days Later, the remake of Dawn of the Dead, Resident Evil, Planet Terror, I Am Legend). Despite this, the conception of zombies in the popular imagination is still lumbering, moaning corpses.

How You Kill Them

Romero: Destroy the brain, and the zombie dies.

O’Bannon: You don’t kill them. In an early scene in Return, the protagonists drive a stake through a zombie’s head, to no avail. Then they cut the head completely off, and the headless body proceeds to attack them. Nothing can destroy an O’Bannon zombie, except for burning it. And this isn’t recommended, since the resulting smoke will just create many many more zombies.

The Modern Zombie: The idea that a headshot is the only thing that can kill a zombie is pretty universal now. O’Bannon’s unkillable zombies, while creepy, are kind of unsatisfying – half the fun of zombies is seeing people kill zombies. (Tellingly, in the later installments of the Return of the Dead series, the zombies can be killed via headshot.)

Romero: Zombies have an endless appetite for human flesh. They don’t care if it’s your face, a leg, or some nice intestines. They just want to eat people.

Yup, Return of the Living Dead is the very first movie in which zombies are specifically after human brains, and they’re not shy about letting you know it.

I watched this scene with the commentary track on, and at one point production designer William Stout implies that he came up with the idea that zombies should eat brains:

Here she’s explaining how eating the brains takes away the pain. And I remember at the time studies were being done on endorphins, which is a natural painkiller that your own body produces. I figured okay. That makes sense.

The Modern Zombie: This one’s interesting. I can’t think of a single modern zombie film in which the zombies moan about “Braaaaaains.” And yet, it’s a big attribute of zombies in the popular imagination (warning: link goes to audio). In fact, it’s a little puzzling that a relatively obscure cult movie would single-handedly create this meme of brain-eating zombies.

I do have a theory, however. In 1992, The Simpsons‘ third annual Treehouse of Horror episode ended with a zombie story, entitled “Dial Z for Zombie.” Someone on the writing staff must have been a fan of Return of the Living Dead, because the Springfield zombies were of the brain-eating variety.

I’m guessing that many many more people saw this Simpsons episode than O’Bannon’s movie. It’s certainly beloved by fans – IGN picked “Dial Z for Zombie” as the second-best Treehouse of Horror segment ever. But more importantly, millions of kids saw this episode before they were old enough to see a real zombie film. I suspect that for a whole generation, this was the first zombie story we ever saw. And that, my friends, is why we think that zombies eat brains, even though most of us have never seen a movie where this is the case.

Okay, let’s take stock. Of the five attributes of zombieness listed above, Romero’s interpretation is currently more popular in “Intelligence” and “How You Kill Them,” O’Bannon’s is more popular in “How You Become a Zombie” and “Movement,” and it’s sort of a wash on whether zombies have a thing for brains or not. And so we’ve finally lurched our way back to my thesis: O’Bannon deserves some credit for making zombies what they are today.

Oh, by the way, click to buy my t-shirt design: 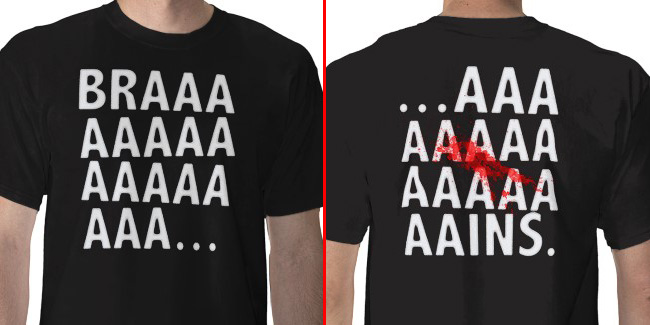 3 Comments on “Dan O’Bannon, Unsung Co-Creator of the Modern Zombie”