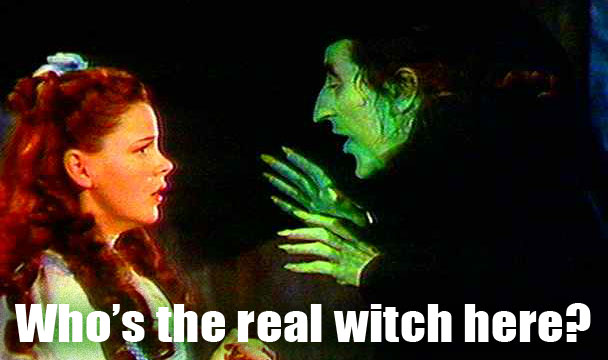 I think I’m going to miss you most of all.
– Dorothy, to the Scarecrow

What the hell, Dorothy?

Why do you have to ruin a beautiful moment by picking favorites like that?

Let me remind you that the Tin Man and Cowardly Lion risked their lives to save you. Infiltrating the Witch’s castle was a suicide mission, but they didn’t hesitate. That’s what friends do. And your with last words before you left them forever, you ripped their hearts out. (And the Tin Man had just gotten that heart.)

Let’s say my friends threw me a party before I went off to spend six months backpacking around Europe. I raise my glass and make a toast: “Thanks a lot, everybody! FYI, Bill is my favorite.” Is that remotely acceptable?

Look, I know she’s just a teenager. She’s at that Mean Girls age, where social politics is her whole world. Maybe to Dorothy, publically declaring your BFF is expected. But my heart goes out to the Tin Man and the Lion. They’re already broken up about her leaving, and then they have to hear her tell the Scarecrow that he gets a bigger slice of the friendship pie.

She doesn’t realize it, but that careless comment probably planted seeds of resentment — the Tin Man and the Lion can never truly be friends with the Scarecrow now. They’re going to be seething with bitterness that she picked him.

Dorothy entered Oz by dropping a house on the Wicked Witch of the East. She leaves it by dropping an emotional house on her friends.

UPDATE 2008-10-26: As a commenter pointed out, this exact observation was the subject of a riff on Family Guy. I totally didn’t know this, and I apologize. It’s both annoying and strangely flattering to inadvertently rip off a popular show. Here’s their take on it:

6 Comments on “Not cool, Dorothy”