Venerable rock band AC/DC made news recently, not so much for their upcoming studio album Black Ice (coming Oct 20; expect more of the same), but for their exclusive deal with Walmart to sell their new album. Walmart, that most venerable of rock institutions, has (almost) exclusive rights to distributing the record, meaning that online music stores (Amazon.com, iTunes) and even other brick and mortar stores (Best Buy, Target) are left in the cold.

Walmart? Exclusive Deal? Go ahead and cringe for a moment while you think about one of the greatest hard rock acts selling out in a big, big way.

But are AC/DC and Walmart such strange bedfellows? No more so than The Eagles, who also made a similar deal with Walmart for last year’s Long Road Out of Eden. In fact, when you put the three together in an oh-so-dorky Venn diagram, the similarities among all three parties become quite obvious. 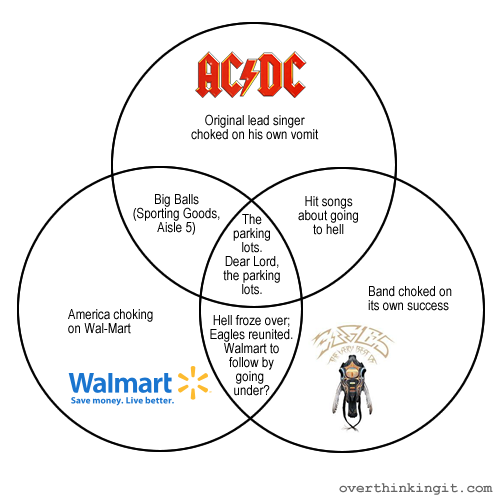 Readers: can you think of anything else that lies in the intersection of AC/DC, Walmart, and the Eagles? Are Walmart and corporate greed (not exhaustion of the form) killing rock music? Got any great stories, or heaven forbid, fond memories from the parking lot of a Walmart store/Eagles concert/AC/DC concert? And what’s with that new Walmart logo?

6 Comments on “AC/DC, The Eagles, and Walmart: A Venn Diagram Just Waiting To Happen”