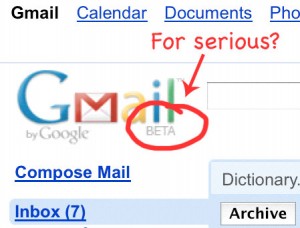 Gmail launched in March of 2004. That means that the service has been up and running for longer than the entirety of World War II American involvement in World War II. It now has tens of millions of users.

(Yeah, I bet all you guys forgot that was still up there.)

Betaware is a nickname for software which has passed the alpha testing stage of development and has been released to a limited amount of users for software testing before its official release.

Insisting that a wildly successful full-featured website is still in beta is like saying, “Oh, this old site? It’s okay, I guess. One day it’ll be good enough so that we can stop being ashamed of it.” It’s the web design equivalent of showboating.

Let me ask you guys, is it possible that nobody over there is aware they still have the word “beta” up there? Maybe if it was pointed out to them, they’d be like, “Whoa, didn’t Roberts take that down last year?” “Me?! I thought you took it down!” “Well, let me just open up Photoshop here… okay problem solved. Thanks!”

UPDATE: This post originally said that gmail had existed for longer than “the entirety of World War II.” This is not in fact the case. The error has been corrected, and its author forced to watched all of that Ken Burns documentary.