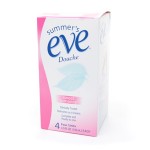 Recently, Mr. Belinkie had the brilliant idea of writing a post about that ubiquitous insult, “douchebag,” but he thought I, being the “resident third wave feminist,” should have the honors.

In reality, I hadn’t really thought much about the word until he asked me to write the post, and I hadn’t thought of it in a feminist perspective until he reminded me how I’ve written myself into the “angry feminist” corner of this blog.  Oh well.

But it brought to mind important questions:

1.    What in the world is a douchebag, literally and figuratively?

2.    Where did the word come from and why is it currently so popular?

3.    Should feminists use the word “douchebag” or not in everyday discourse?

The answers to these burning questions below… 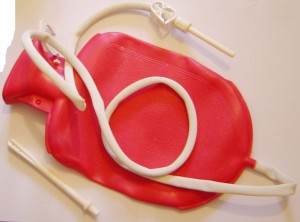 This is actually a combination douche and enema bag, a nice reminder that a douche is just an enema-- for your vaj!

Douches, if you don’t know, are interesting contraptions that some women stick up their cooters to spray their innards with water, vinegar (ouch), or some chemical solution in the hopes that they can wash away that icky girl smell.  They come in a variety of smells (flavors?), such as Baby Powder, Mountain Breeze, Spring Rain, Island Splash, and Sweet Romance.  I’ve never used one, nor will I for this post, because almost every doctor in the Universe agrees they are very unhealthy and that vaginas, like a good oven or a cat, are self-cleaning.  Douching can actually lead to a less clean vagina, causing infection and other nastiness.

The douche contraption is made of a bag (the “douche bag”) or bottle filled with the cleansing liquid and a hose that goes up your cootch.  There seems to be nothing wrong with this bag except for the fact that it is filled with the liquid of the douche.

But this isn’t how we use the term “douchebag” in common parlance.  A naïve suburban girl, I had never heard the term until I entered college in 2002 and learned to understand its complexities to such a degree that I was able to deliver an verbal dissertation to my mother during Spring break about the differences between a douchebag and a tool. 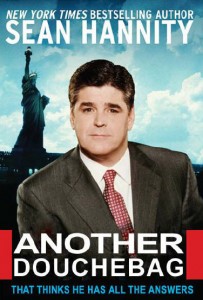 I didn't make this, but I do agree with it.

To me, a douchebag is an asshole.  A douchebag is almost always a man, particularly an alpha-male or a wannabe alpha-male.  Frat boys tend to lean towards douchey; drunken frat boys almost always cross the line (which I recently learned was called “the Feder-line,” interestingly).  Douchebags may very well be smart, but they act like idiotic assholes who don’t give a damn about anyone but themselves.

According to Urban Dictionary, however, there are two distinct definitions for douchebag:

To figure out which is the “correct” definition, we need to go back to the source.  It’s like the old story of the zebra.  Is a zebra white with black stripes or the other way around?  The only way to tell is to look at the source.  A baby zebra is black, so a zebra is black with white stripes.

Apparently, douchebag is an olde tyme insult, much like “trollop” or “dingbat.”  The OED says it was first printed in the 1930s and that it was popularized in the 1950s as a term of contempt towards women. 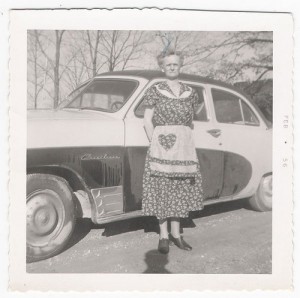 Once called a douchebag by her husband in 1954.

Theoretically, then, feminists should not say douchebag, because, like “bitch” or “cunt,” it’s nasty towards the female gender.  Heart of Women’s Space agrees that the link between these terms is fair because “douchebag,” like “bitch and “cunt,” is only insulting because it’s related to women and their inferior plumbing.  This argument definitely gives me pause, because I did make a conscious decision not to use the word “bitch” anymore for that very reason.  I tried to give up “cunt” but ultimately decided to co-opt it with some of my friends in college.  If black people can use the N-word, then we should be able to call each other “cunt muffins” and “my little cuntykins” all we want, right?  Cunt power!  The film, Atonement, I think, also brought back the sexy side to the word “cunt,” which is pretty neat.

I am loath to give up “douchebag,” though, because I had always used it against men who were nasty to women.  I didn’t mean that they were womanly; I meant that they were trying to use their patriarchal nastiness to get play.  Douchebags are guys who take advantage of drunk freshmen at parties and then act all offended when someone accuses them of rape.  Douchebags, in my mind, are assholes who are on the top of the social hierarchy and therefore are allowed to act as douchey as they want.  Amanda Marcotte, feminist extraordinaire of Pandagon, is with me on this one, so I guess I can pull an appeal to authority and win this one.

Let’s go back to physical douchebags for a second.  Are they really associated with women?  Sure, only women use them, as far as I know.  But the fact is that douches are associated more with the patriarchy than with women themselves.  The only reason women ever used douches was to clean themselves so men would like them.  Men didn’t like the “gross” vagina smell, so drug stores started selling douches and advertisements started telling women that if they didn’t clean themselves boys wouldn’t like them.  So here’s my argument:

So I’m going to continue to call people douchebags.  Proudly.

11 Comments on “On Douchebags”