What is Cthulhu, really? Why are the Great Old Ones here on Earth, and what are their plans?

These are some of the great mysteries that have been haunting us since H.P. Lovecraft first introduced his Cthulhu mythos in the 1920s.

But those questions are dumb. The real question is: how the hell are you supposed to pronounce his freakin’ name? 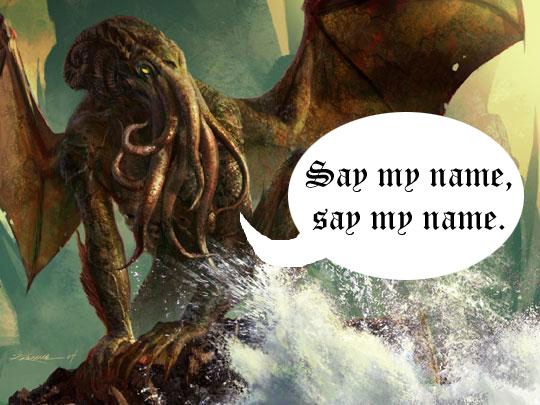 But why? Tradition? Because the author said so? ‘Cause that’s how they say it in the role-playing game, Call of Cthulhu(tm)?

Before you start yelling, hear me out, below the magic fold…

H.P. Lovecraft clearly derived the name, “Cthulhu,” from the term “chthonic,” a Greek word pronounced “THON-ik” and meaning “dwelling beneath the surface of the earth.” Because the chthonic has to do with deities from underground, it simultaneously signifies creation (the Earth mother, etc.) and death (the grave and the Underworld). Jung also said that the chthonic symbolized the dark and evil recesses of the subconscious, for what that’s worth.

Tell me this all doesn’t describe your “kuh-THOO-loo” to a T. Moreover, we all know that Lovecraft was an avid adorer of esoteric words. Who else would use “eldritch,” “ichor,” and “lanthorn” with a straight face? He must have been thinking of the chthonic when he invented his most famous creature, a deity who lives underground and seems to represent all the scary heebie jeebie things in the back of your mind, just like the chthonic.

And just as no knowledgeable speaker of the English language would pronounce the first syllable of THON-ik for fear of being laughed at mercilessly by Harold Bloom, no one should pronounce the “kuh” of “THOO-loo.” They contain the same root (khthon, meaning earth) and represent the same concept.

Take a stand, world. Are we to mispronounce this name for the rest of time simply because of a flawed tradition? Will we fall prey to the anti-intellectualism that is currently sweeping the United States? Or will we rise up and say, “enough is enough”?

Drop the dreaded “kuh.” For the linguists.