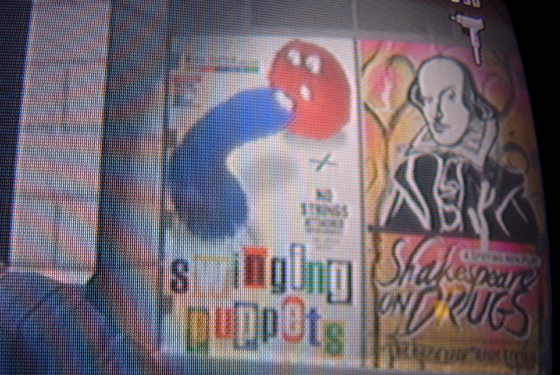 I’m the sort of nerd that doesn’t play videogames, but since college one of my favorite entertainment activities has been watching people with far greater skills play Grand Theft Auto. And unless you’ve been spending eighteen hours a day in a dark, windowless room (a situation not uncommon in my other line of work, theater acting), you notice that GTA IV is out. It is far, far better written, acted, and produced than most plays I’ve seen. Or heard about. Or been involved in.

So what does the preeminent art form of the twenty-first century have to say about the preeminent art form of the negative tenth through nineteenth?Check out these posters for various theatrical entertainments in the world of the game (via Blog Stage, an actor blog where those of us who aren’t getting work read about other people who aren’t getting work).

In Liberty City, you can take in Swinging Puppets, Shakespeare on Drugs, Fairy Body Paint, and Banging Trash Can Lids for an Hour. It hardly needs saying that any of these looks more interesting than what is acutally on Broadway at the moment… though not nearly as interesting as killing prostitutes.