[This post ends a five-part weekly series by Matthew Belinkie. Express your appreciation in the comments. —Ed.] 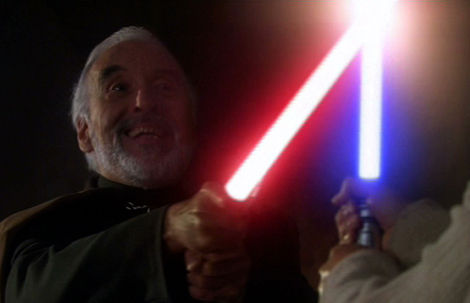 The Movie: Star Wars: Episode II – Attack of the Clones

Christopher Lee was 78 years old. Most men that age can’t wield a steak knife, much less a lightsaber. Lucas probably just had Lee stand in front of a greenscreen and flail around, then choreographed the other two so it looked like he was destroying them.

Obi-Wan says, “We’ll take him together. You go in slowly on the left…” at which point Anakin rushes in alone and gets a lightning bolt shoved down his throat. But does anyone else find it funny that Obi-Wan was discussing the strategy outloud, right in front of Dooku? Couldn’t they plan their attack in code or something? “Anakin: red delta seven, variation B.” If it works in the NFL, I don’t see why Jedis can’t have a playbook.

Anyway, Dooku tries to zap Obi-Wan, but it turns out a lightsaber doubles as a dandy lightning rod. So the battle begins. They twirl around a bit and it’s unclear who’s got the upper hand. But Obi-Wan’s breathing hard, whereas Dooku’s tossing out trash like, “You disappoint, Master Kenobi.” And disappoint he does. Dooku slices him twice, and Obi-Wan’s down on the floor, moaning.

Then Anakin flies in from across the room to save his master. Obi-Wan tosses him a second lightsaber, and we get a little spicy-handed saber action. This two-lightsabers-at-once thing lasts exactly seven seconds. (Honestly Lucas, if you’re only going to have them fight like that for two shots, why bother? And don’t tell me it’s too hard to choreograph, because there’s a badass two-swords-at-once fight in Shanghai Knights.)

Dooku chops one saber in half. They fight a little more, then Dooku cuts Anakin’s arm off, and adding insult to injury, uses the Force to push him across the room. He lands next to Obi-Wan, who looks at him with an expression of disgust so real, I have to assume MacGregor didn’t even know the cameras were rolling and that’s just how he looked most of the time during that shoot.

Then, of course, Yoda enters, and a new fight begins which deserves its own series of posts.

Christopher Lee was offered the part of Grand Moff Tarkin in the original Star Wars.

Or read more from… Humor, Movies, CGI, getting too old for this shit, mismatched fistfights